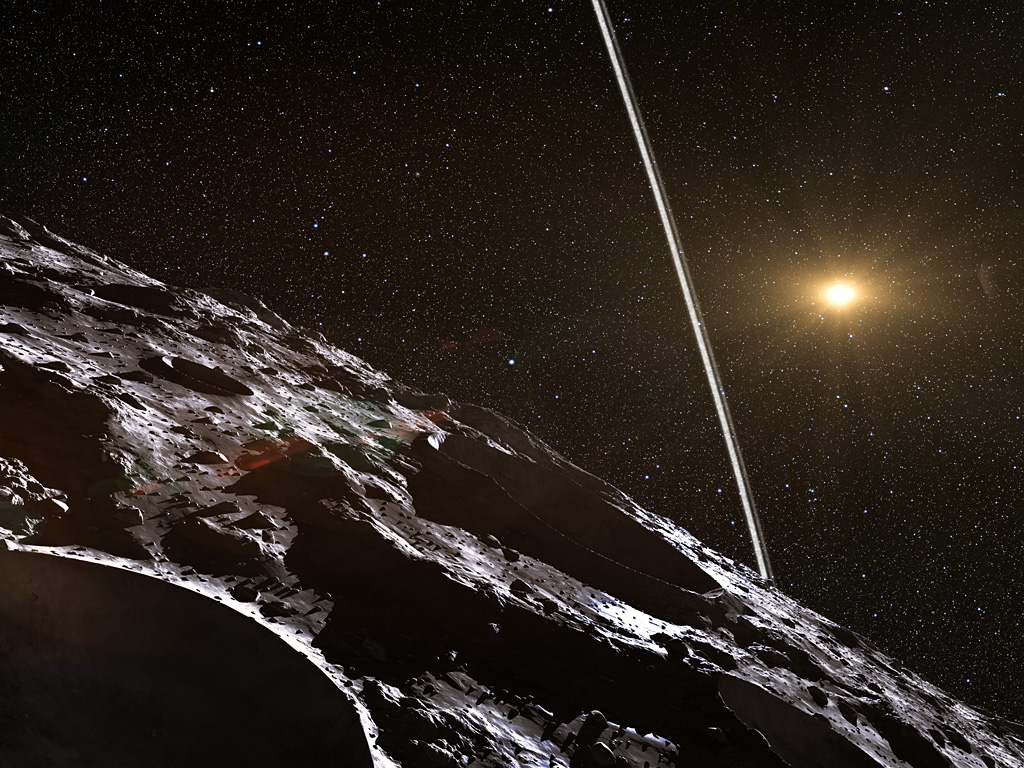 My recent work has made me realize that asteroids (also called small solar system bodies or minor planets) are in fact real mini-geological worlds. Planetary scientists found out about their complexity very recently after visiting them with robotic spacecraft that took snapshots of their surfaces. These images showed the presence of geological activity on their surface (craters & landslides) and morphological features (ponds of dust, and pebbles). More recently, studies based on powerful observations with large ground-based telescopes, revealed that several asteroids have moons. The follow-up of their moons’ orbits revealed a complex interior for these asteroids that is possibly differentiated, similarly to the major planets.

The announcement of a ring around a Centaur is, without doubt, another step ahead in blurring the differences between minor and major planets. 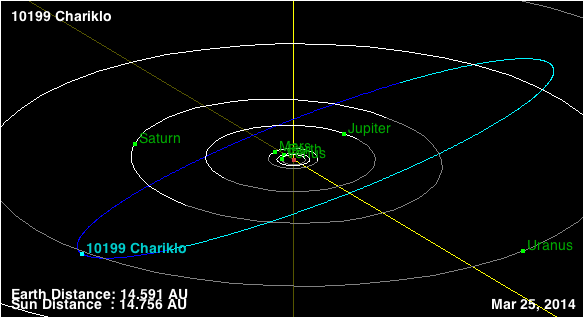 Centaur asteroids are a special population of minor bodies which orbit among the giant planets. They possess the characteristics of comets, since some of them have shown cometary activity, and can also look like asteroids. They are most likely made of a mixture of ices and rocks.  They were discovered quite recently and because they are far away from us, we don’t know much about them beyond their orbits around the sun, the colors of their surfaces, and the average size for the largest ones.

One Centaur named Chariklo, or asteroid number 10199, was discovered in 1997 by the Spacewatch survey. It has never been the target of the Hubble Space Telescope because time on this telescope is extremely difficult to obtain, due to the high competition with other programs. Also, to my knowledge, none of the 8-10m class telescopes equipped with adaptive optics has also observed it, most likely because of its faintness (V~18.3 in visible).  Consequently, we didn’t know much about this asteroid, with the exception of its average size of 260 km.

A team of astronomers designed a clever way to study distant asteroids, like Centaur asteroids.  Since their orbits are well-known after several years of observations, they can predict when a Centaur asteroid will hide the light of a bright star and where and when this event will happen.    On 3 June 2013, Chariklo passed in front of a star and the path of this occultation crossed South America. Based on this prediction, seven telescopes observed the disappearance of this star that lasted a few seconds. But what really stunned the astronomers was that the star also vanished a few seconds before and after the main occultation.

After putting together those occultation chords, they derived the size and shape of Chariklo, and realized that these secondary occultations could be best explained by assuming that Chariklo is surrounding by a dense ring of dust.  Using data from the largest telescope involved in these observations (the 1.54m Danish telescope located at La Silla Observatory in Chile), they found out that there are in fact 2 rings around Chariklo.

This is not a direct image per se, but their work, which is based on multiple chords taken from a wide variety of instruments and different observers, is quite reliable.

The structures in the disk around Chariklo suggest that the system is quite complex. We can assume that its rings are shepherded by a system of moons, not yet detected, like the F ring of Saturn is shepherded by Pandora and Prometheus. 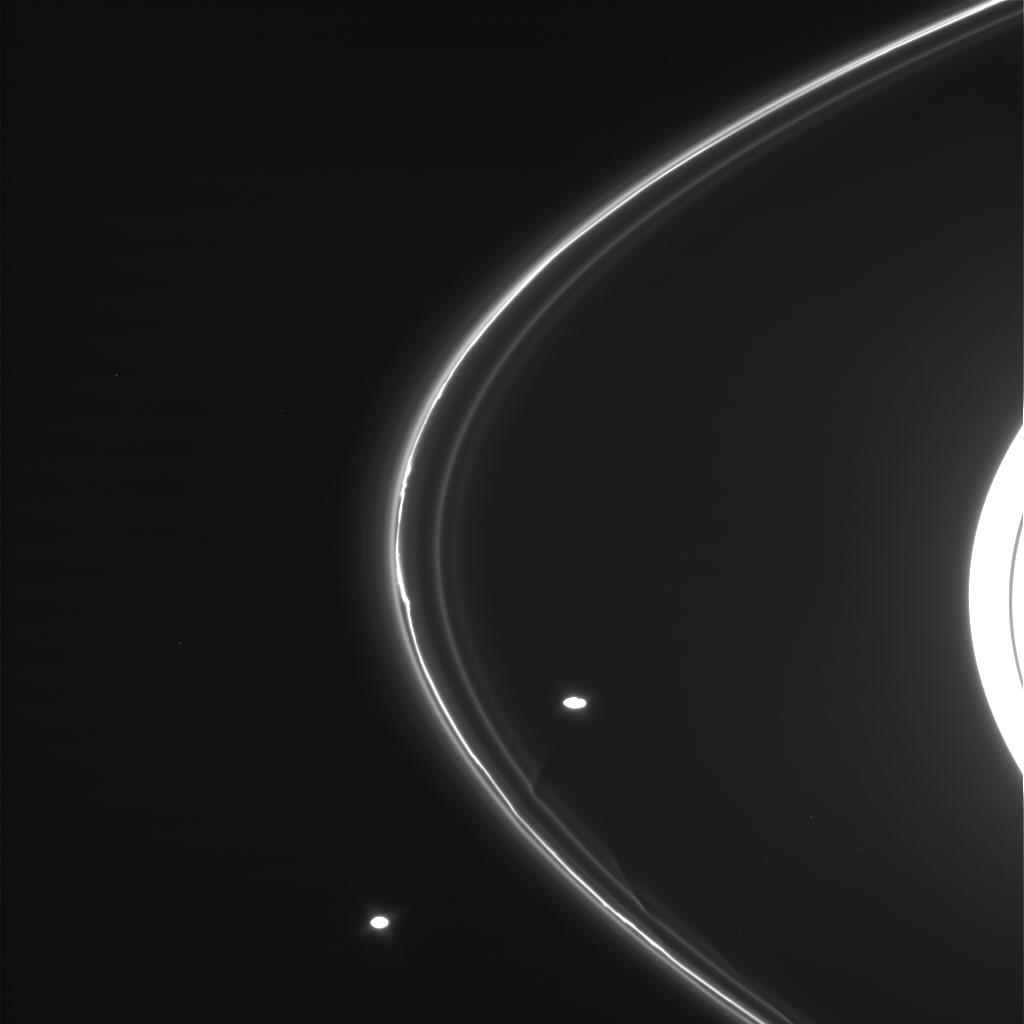 The team also discussed the consistency of their results with previous observations of Chariklo. Between 1997-2008, they calculated that the system was seen edge-on, so the ring of dust was occulting the primary and should have dimmed its brightness significantly. This attenuation of Chariklo’s brightness was reported in the literature and no explanation had been found at the time. Additionally, spectroscopic variations of Chariklo were seen during the same period. The disappearance of these absorption bands, when the ring was edge-on, could be explained by assuming that it is made of ices and organics.

“How did such a system form?” is the bonus question of this study. The presence of those signatures of ices in the spectrum of the Chariklo system implies that the system is young, so how are we so extremely lucky to see it? The team discussed a collisional origin but other scenarios could be considered. I hypothesize that the system has a complex moon system and the rings are replenished by cometary activity from the surface of the primary.

Chariklo’s ring system, and those that remain to be found, are not only a curiosity for astronomers, they are also a time-capsule that allow us to peek into the collisional history of our solar system. Their study could also help us understand the composition of the asteroid itself.

One simple question that came to my mind when I read the article is why we found this ring system around a centaur asteroid? It would have been easier to find it around an asteroid in the main-belt since they are closer to us and we observe the larger ones quite often with large ground-based telescopes. I suspect that this is related to the composition of centaur asteroids and that the ring is indeed a secondary product of their surface activity.

I am done speculating for the moment, and will simply enjoy this rare moment when a new sub-field of research in planetary science is being born.