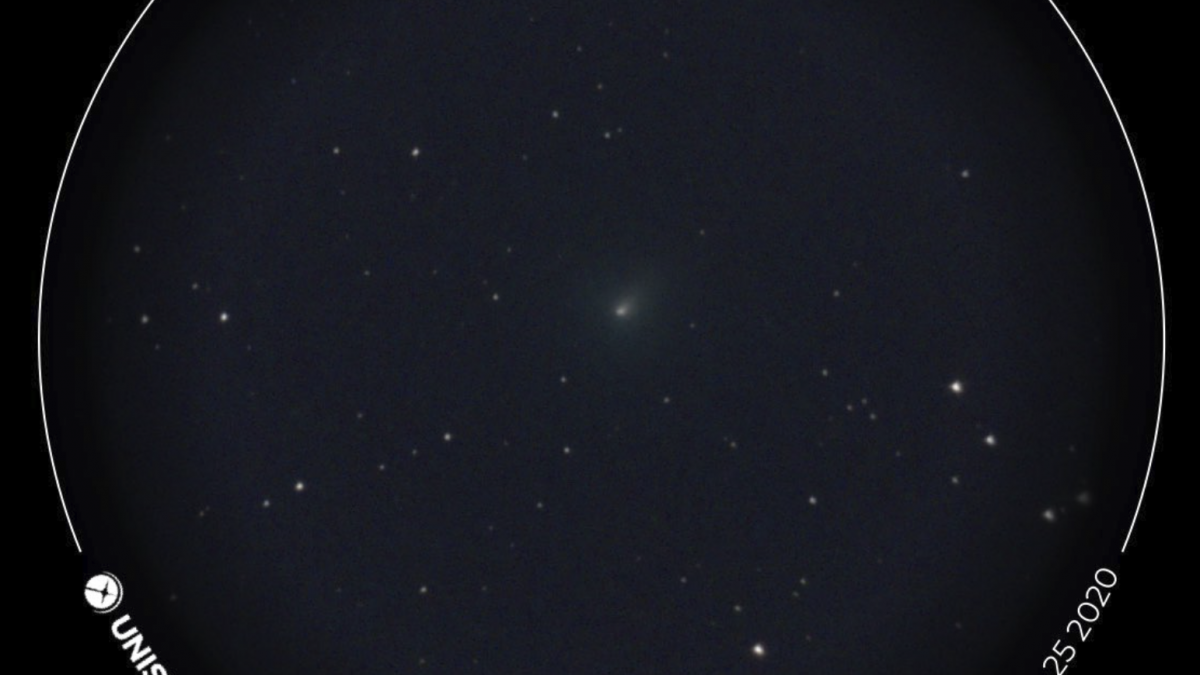 Finally! After several years of waiting we may soon have, in Comet ATLAS, a bright, naked-eyed comet passing by Earth. The last visitor to do this was Comet 46P/Wirtanen, which was barely visible in December 2018 from highly polluted areas. Current models predict that Comet ATLAS could be brighter and easy to spot in the sky even for novice citizen astronomers. Of course, anyone who has a telescope can already witness brightness and morphological changes in the comet at it approaches the Sun. If, like a lot of us, you’re sheltering at home, this is the ideal time to look up with your binoculars or telescope and enjoy your date with a comet.

Known officially as Comet C/2019 Y4 ATLAS, ATLAS was discovered on Dec. 28 2019 by the robotic survey Asteroid Terrestrial-impact Last Alert System, which is dedicated to the detection of near-Earth objects. At the time of its discovery, the comet was a very faint fuzzy blob with a small tail whose orbit seemed to mirror that of the legendary Great Comet of 1844. Astronomers hypothesized that Comet ATLAS could be a fragment of the same parent body.

Last year, astronomers discovered 94 new comets, which may make you wonder why this one is particularly interesting. In truth, we’re still not sure if it is special because comets are like cats— highly unpredictable—but current models show that it could reach a Vmag of 0 to 2 by the end of May 2020, meaning that it will be visible even from cities. 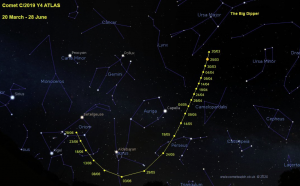 Sky chart showing the location of the comet from March 20 to June 28.  credit: cometwatch.co.uk

If you’re lucky and own a telescope, you’ll be able to observe its tails and see it changing over the course of the upcoming weeks. Several astronomers have already started following the comet with their telescopes, including citizen astronomers in the Unistellar network. Once given the comet’s coordinates, owners of Unistellar’s eVscopes will be able to use their device’s Enhanced Vision capabilities to reveal the greenish color of the comet as well as its coma and tail, which are made up of dust particles ejected from the nucleus.

Comet ATLAS observed with the Unistellar Network from Franck Marchis on Vimeo.

As the comet gets closer to the Sun (minimum distance 0.25 AU, so one-quarter of the distance from the Earth to the Sun on May 31) and closer to Earth as well, it will be more active and hence brighter, and show some interesting morphological changes such as the development of a longer tail, a second tail connected to the magnetic field of our Sun, and jets of activity in the coma. 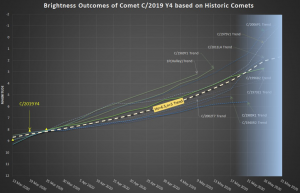 Pessimistic predictive model of the brightness evolution of Comet ATLAS. Other models indicate that it may reach a magnitude of -2 at least (credit: Terry Lovejoy)

Unfortunately, we don’t really know how this comet will evolve. Comets approaching our Sun for the first time become extremely active and can retain that activity for a time, or suddenly lose it. Those fizzing comets trick us, and the history of modern astronomy is full of big disappointments. One of more famous was Comet Kohoutek, which was promoted by the media in 1973 as the “comet of the century” and reached only magnitude -3 . Today we think that its early explosive activity was related to the fact that it was on its first visit to the inner solar system, and its nucleus partially disintegrated when it came close to the Sun. 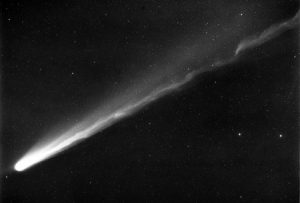 Cometary astronomers discussing the case of Comet ATLAS all seem to agree that we can’t predict the activity of this comet. Its currently morphology is abnormal, and it seems to brighten every day because its coma is growing.

Personally, I think it’s great that comets still surprise us. Because they come from far away and their composition and evolution seems to be very complex, their behavior when they come close to our Sun is unpredictable.  Like cats, they are beautiful and mysterious objects.

In the meantime, let’s do what we can to observe Comet ATLAS from our homes.  By observing it, you can collect data for scientists whose largest telescopes are shutdown due to the COVID-19.  And while observing from your backyard, you can also enjoy the beauty and erratic behavior of Comet ATLAS, and remember that this body formed on the outskirts of our solar system and comes back to visit us every 6,025 years. What will be on Earth next time it visits? That’s something we can’t predict either. 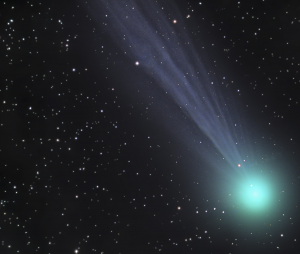