Is the triple Asteroid Minerva a baby-Ceres?

The official EPSC-DPS press-release about our latest discovery on the analysis of the moons of (93) Minerva and understanding of the composition of this main-belt triple system is finally out. 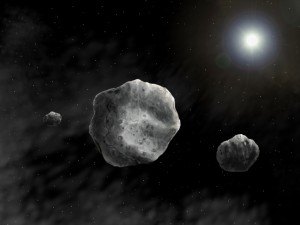 Two years ago, I reported on this blog the discovery of those moons. Let’s confess that I am glad to have finally solved secrets of this enigmatical main-belt asteroid. It was one of the most difficult multiple systems to characterize and understand due to its strangely spherical shape. Hopefully it will give birth to follow-up works which in return will give us constraints on the formation of asteroids in general. Now the news are out and the paper almost submitted, I am curious to see what my colleagues will find about this “baby-Ceres”.

Our result in a nutshell: 93 Minerva is a 156km– spherical asteroid with two 3 to 5 km size moons. Its bulk density (~1.9g/cm^3) is larger than other C-type multiple asteroids (0.8-1.3 g/cm3) implying a different composition, similar to dry carbonaceous chondrite meteorites. Spectroscopic analysis show that Minerva could be a G-type asteroid, so possibly a “baby-Ceres”.

I participated to a press-conference at the EPSC-DPS on Thursday October 6 to explain to journalists why this asteroid is important to us. I am not sure that I succeeded since this is definitely not something that I feel comfortable in doing but you can watch the pictures and a video of the conference on the EPSC website.

Below the text of the PR. A well-paginated version of the PR is also available on the SETI institute and the EPSC-Outreach websites.

Thanks to my colleagues who accepted to be part of this difficult project and without whom this work would not have been possible. This project was a fantastic team work.

It was a great week at the EPSC-DPS conference, stressful and intense but also interesting and fun. Now I am back to Observatoire de Paris to start a new project. Stay tuned for a surprising new result…

Since the discovery of its two moons, the triple asteroid Minerva has been the focus of space and ground-based telescope studies that have attempted to unravel the secrets of this intriguing system. A multiple-telescope campaign has now revealed that Minerva is unusually round for an asteroid, and has a possibly unique structure.

The campaign to “weigh” the asteroid and derive its density and other characteristics was undertaken by an international team of planetary astronomers led by Franck Marchis, researcher at the Carl Sagan Center of the SETI Institute.  Marchis will report on their findings at the EPSC-DPS Joint Meeting 2011 in Nantes, France,

Minerva is the fourth asteroid located in the main-belt known to possess two moons. With a diameter of 156 km and two tiny 5-km size moons, this triple system orbits around the Sun between Mars and Jupiter. The two moons were discovered in 2009 using the Keck II telescope by members of this team. Other triple asteroids in the main-belt are 87 Sylvia (triplicity discovered in 2005), 45 Eugenia (2006), and 216 Kleopatra (2008). Marchis and his team were involved in the discovery of the triplicity of these asteroids and the follow-up studies.

“Very little was known about Minerva apart from the asteroid’s orbit around the Sun and a rough estimate of its size and shape. Shortly after the discovery of its two moons our group focused on re-analyzing previous data from ground-based and space telescopes, and organizing a campaign of new observations to better understand the nature of this intriguing asteroid,” said Marchis.
The team studied the asteroid in detail using the large W.M. Keck telescope in Hawaii and a small robotic telescope at Kitt Peak. Together, these observations enabled the astronomers to make precise determinations of the orbits of the moons by directly imaging the system and by detecting an eclipse event.

“Eighteen months after the discovery of the moons with the 10-m Keck II telescope we requested telescope time with the super-LOTIS telescope, a small 60cm robotic telescope at Kitt Peak, to refine the spin period and shape of the large 156-km asteroid” said Descamps, an astronomer at the Institut de Mecanique Celeste et de Calcul des Ephemerides at Paris, France.

This new result on the shape of Minerva was derived by combining optical data recorded over the past 30 years, the high-resolution images from the sophisticated optics system available at the Keck Observatory, and the result of a stellar occultation observed by US-based amateur astronomers on December 24 2010.

“The determination of the shape was complicated by Minerva’s unusually round form” emphasized Josef Durech, astronomer at Charles University in Prague, Czech Republic, “the shape model could not have been derived without combining these three types of data”.

Interestingly, the three other main-belt asteroids known to have moons have very elongated shapes, suggesting that Minerva may have a different interior composition or structure.

The existence of moons around an asteroid provides a direct means of measuring the mass of the system, and if the size of the central asteroid is well known astronomers can derive its density as well. In the case of Minerva it was possible to determine the size of the asteroid in two different ways: by analyzing the stellar occultation event observed on December 24 2010 and by re-analyzing archived data of the IRAS infrared space telescope obtained in 1983. Both methods indicate that Minerva has a diameter of about 156 km. Assuming a similar composition for the moons and the asteroid, and using the adaptive optics observations from the Keck telescope, the team of astronomers have now concluded that the moons are tiny: around 5 km in diameter.

From the shape, size and mass of the asteroid, the astronomers calculated its density to be 1.9 grams per cubic centimeter. Minerva appears to be a primitive type of asteroid known as a carbonaceous chondrite.  Assuming it has the same composition as the denser carbonaceous chondrite meteorites collected on Earth, its macro-porosity, or percentage of empty space, is around 30 percent.

“All large main-belt asteroids known to possess one or several moons have large porosities, possibly due to a rubble-pile interior,” Marchis said. “However Minerva has a significantly higher density than other carbonaceous-type asteroids in multiple systems. We may finally be detecting subtle differences in the compositions of these types of asteroids, something we suspected from studying the composition of carbonaceous chondrite meteorites. These results may provide insight not only into the history and formation of multiple asteroid systems but also the structure and origin of asteroids in general.”

The asteroid 93 Minerva was discovered by J. C. Watson in 1867 at Ann Arbor, Michigan and named after Minerva, the Roman equivalent of Athena, the goddess of wisdom. The moons orbit around the 156-km asteroid at distances of 650 km and 380 km in 58 hours and 27 hours, respectively (near the equator of the primary and in almost perfectly circular orbits). The moons have not yet received official names.

The asteroid Minerva was in this position when observations were made using the Infrared Astronomical Satellite (IRAS). Credit: F Marchis, SETI Institute.
http://www.europlanet-eu.org/outreach/images/stories/ep/news/epsc2011/marchis_iras%20lightcurve.jpg

Images of the asteroid Minerva and its two moons (highlighted by the arrows) made using the Keck Observatory in Hawaii. Credit: F Marchis, SETI Institute.
http://www.europlanet-eu.org/outreach/images/stories/ep/news/epsc2011/marchis_keckobs.png

Images of the asteroid Minerva and its two moons (highlighted by the arrows) made using the Keck Observatory in Hawaii. Credit: F Marchis, SETI Institute.
http://www.europlanet-eu.org/outreach/images/stories/ep/news/epsc2011/marchis_keckobs2.png

The EPSC-DPS Joint Meeting 2011 represents the first cooperation between the European Planetary Science Congress (EPSC) organised by the Europlanet Research Infrastructure and the Division for Planetary Sciences of the American Astronomical Society. The meeting is being organised in association with the European Geosciences Union and with the support of the Université de Nantes. More than 1800 abstracts for oral presentations and posters have been submitted for the meeting.

EPSC-DPS 2011 provides a platform for the worldwide planetary sciences community to exchange and present results, develop new ideas and network. It has a distinctively interactive style, with an extensive mix of talks, workshops and posters, intended to provide a stimulating environment for the community to meet. The meeting covers the entire scope of the planetary sciences.

Details of the congress can be found at the official website:
http://meetings.copernicus.org/epsc-dps2011/

A session overview is available at:
http://www.europlanet-eu.org/outreach/images/stories/ep/epsc-dps2011schedule.pdf

The Europlanet Research Infrastructure is a major (€6 million) programme co-funded by the European Union under the Seventh Framework Programme of the European Commission.

Europlanet’s Networking Activities provide European planetary scientists with the opportunity to define key science goals, and to exchange ideas and personnel.  Europlanet provides TransNational Access to leading laboratory and field site facilities tailored to the needs of planetary research for Planetary Sciences, developing them further through highly focused Joint Research Activities. It is building a Virtual Planetary Observatory where all types of planetary data can be accessed.

The Division for Planetary Sciences (DPS) of the American Astronomical Society (AAS) is the largest organization of professional planetary scientists in the world. The DPS was formed in 1968 as a sub-organization within the AAS devoted to solar system and extrasolar planet research. Today it is the largest special interest Division of the AAS.
DPS Website: http://dps.aas.org/