UARS reentry visible from the Bay Area and elsewhere…?

Is the triple Asteroid Minerva a baby-Ceres?

I am calling myself a Planetary Astronomer, essentially because I use ground-based telescopes to study our solar system bodies. Even if I often write posts on this blog  about the wonderful results brought to us by space missions, space stations and other space-releated projects, my heart and my work are mostly dedicated to pushing the limit of ground-based telescopes and their instruments. Extremely Large Telescopes (or ELTs), ground-based telescopes with an aperture larger than 30m are without any doubt the next giant leap in the development of astronomy. I always wondered what it would be to be close to one of these giants, now I know…

A few years ago, the ELTs were mostly speculated projects, but today they are  becoming a reality. I witnessed this change over this year by attending several workshops dedicated to the design, science, and instrumentation of the ELT. The “Feeding the Giants” workshop at Ischia, an island near Naples, Italy in August 2011 was a great opportunity to reconnect with my ground-based astronomer colleagues. During those 5 days, we exchanged our vision on the future of astronomy, including the role of these giant telescopes (TMT, E-ELT, Giant Magellan) to answer fundamental questions in astronomy but also the technological and human challenges linked to these projects. With a contruction budget of almost $1B and a construction time scale of ~7 years, they are the most expensive and complex projects ever envisioned in the world of ground-based astronomy.

The picture shown below gives you a flavor of the immenseness of the E-ELT (European-ELT). During the last Scientific and Technical Committee of ESO on Friday September 23rd, the attendees put together this gigantic cardboard puzzle of 768 pieces which represents the primary mirror of the E-ELT at scale 1 with a size of 39.3 m tip to tip. 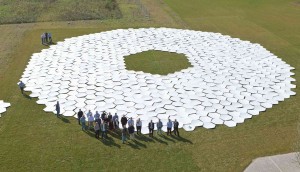 A scale 1 cardboard E-ELT primary mirror made of 798 pieces set up during the Scientific and Technical Committee of ESO, Garching, Germany. Courtesy Markus Kissler-Patig

The dome, which is needed to protect the telescope and its fragile instruments, will be one of the largest scientific facility ever built. The rendering image shown below gives a flavor of the gigantism of the structure which will be installed on the top of Cerro Armazones, in the desert of Atacama in Chile. Astronomers chose hostile and remote locations to set up their large telescopes to take advantage of the pristine and clear sky, which is not yet polluted by the presence of large cities or other human activities.

Today, planetary astronomers can request time on 8-10m class telescopes equipped with adaptive optics systems, to study the bodies of our solar system with an angular resolution very close to the theoretical resolution of the telescopes, so as if the telescope was located in space. Tomorrow, or more precisely in 2018+, with those ELTs, we will be able to study the wonder of our solar system and beyond, with an unprecedented resolution. For instance, the Io observations that would be recorded by a ELT will have a comparable image quality than the Galileo spacecraft global data (spatial resolution of 20 km). For those interested in the outer solar system, they should keep in mind that with these instruments, we will be able to see details on the surface of large Trans-Neptunian Objects. If you are considering exploring those recently discovered new worlds called exoplanets, with the ELTs  you will be capable of detecting & studying several hundreds of exoplanets by determining their temperature, size, composition, the presence of climate change & bio-signatures. Finally  there is also the “unexpected“… or what will be discovered as soon we will start watching the sky using these powerful and sensitive new facilities, something that none of us can imagine now but that may change our vision of the universe .

All of these with a modest budget of $1B… It is not much in the scale of other astronomical projects (HST & JWST cost 10 times more) or space mission projects (e.g. equivalent to one launch of the Space Shuttle), so what are we waiting for? Let’s make sure that in a the next months, we go from setting up a mockup of the primary  to really start building those telescopes in the desert of Chile and on the top of Mauna Kea. A new great adventure for ground-based astronomy and a fantastic challenge for all of us is about to start.

PS: This post was written in the plane from SFO to JFK on my way the DPS-EPSC conference in Nantes, France. As usual I am running out of  battery butI hope it makes sense anyway. Let me know…