UARS reentry visible from the Bay Area and elsewhere…?

If you have been following the news about space over the past 5 days, you may have heard about this gigantic 6.5-ton satellite dedicated to the study of our Earth atmosphere (UARS for  Upper Atmosphere Research Satellite) that is supposed deorbit tonight on September 24 2011 UT. The question we all have in mind is where and when this spectacular event will happen. 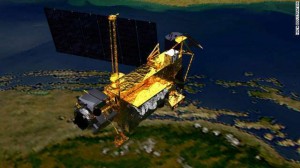 An artistic image of UARS in orbit around Earth.

Various space organizations around the world (SpaceTrack, FFRDC, & CNES) have dedicated teams to follow the orbit of the spacecraft and predict with accuracy when and where the reentry will happen.

UARS is an old satellite, launched on Sept. 12 1991, aboard the space shuttle mission STS-48. It was the first multi-instrumented satellite to observe chemical components of the atmosphere of our planet. It ceased its scientific life in 2005 and was since then orbiting around Earth. Due to its low altitude and the dragging of our atmosphere it ha been losing altitude and numerical models from various institutions predict that it will reentry in Earth atmosphere quite soon.

Thierry Legault, an astrophotographer, imaged the satellite on September 15 from Dunkerque in the North of France (see the video below). His observations showed that the satellite is tumbling possibly due to a collision with satellite debris a few years ago.  The satelllite is therefore out of control and since it orbits around Earth in 1.5h it is very difficult to predict when and where the rentry will happen.

On Friday morning it was only at 150 km up, and the center for orbital and reentry debris studies is currently predicting a reentry on September 24 at 04:04 UT (+/-3h).

The optimum position of the renetry is currently above the Pacific ocean in daylight. However, sinjce there is a significant uncertainty of 3h for the rentry it is possible to capture the desintegration from the US, especially from the Bay Area. If the reentry is delayed it may happen above the US at 21:P17 PDT (4:17 UT). My colleague P. Jennisken from the SETI Institute mentioned to me that it would be visible from the Bay Area in the Nort-East direction at 4 deg elevation, so very close to the horizon. 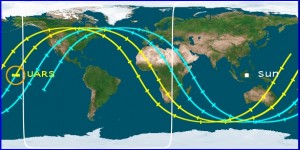 Due to the 3h current uncertainty, the reentry can in fact happen anytime along the yellow and blue tracks, so in North America, Europe, Africa, and Australia. You should be able to find the real time position of UARS on the heavens-above web site. Since the date and location of the reentry changed already several times over the past 2 days, I recommend that you check out this website and the center for orbital and reentry debris before making a long drive to find a spot in the hope of seeing this spectacular event. Because of  the large size of the satellite, it is likely that some pieces of satellite reach the surface but it is very unlikely that these fragments hit any observers located on the ground.

Enjoy the show, if it happens, if not you can still watch this CGI animation. I will try to update this web page with new pieces of information as they become available.

at 8pm PDT: A new update from center for orbital and reentry debris studies give a new reentry time at 24 SEP 2011 @ 05:10 UTC ± 2 hours over the Indian Ocean, but with still a possibility of happening north of California at 4:20 UT 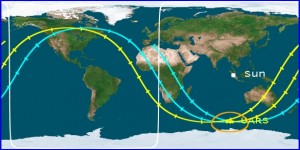 After a long night of rumors, false announcements that you can follow on Twitter (hashtag #UARS), it t is unclear when and when the reentry occurred. Ground tracking systems from Vanderberg reported that during the last orbit the satellite crossed the Pacific Ocean but may have disappeared somewhere above Canada. the Pacific Ocean.

The Joint Space Operations Center at Vandenberg Air Force Base in California says UARS re-entered over the North Pacific Ocean, off the west coast of the United States.”The precise re-entry time and location of any debris impacts are still being determined. NASA is not aware of any reports of injury or property damage,” the space agency said in a statement.

NASA’s decommissioned Upper Atmosphere Research Satellite fell back to Earth at 12 a.m. EDT (0400 GMT), as Friday, Sept. 23, turned to Saturday, Sept. 24 on the United States east coast. The Joint Space Operations Center at Vandenberg Air Force Base in California has determined the satellite entered the atmosphere over the Pacific Ocean at 14.1 degrees south latitude and 189.8 degrees east longitude (170.2 west longitude). This location is over a broad, remote ocean area in the Southern Hemisphere, far from any major land mass. The debris field is located between 300 miles and 800 miles downrange, or generally northeast of the re-entry point. NASA is not aware of any possible debris sightings from this geographic area.

So why NASA suddenly managed to pin point the exact location of the UARS reentry? Click here to find an explanation by a group of amateur astronomers equipped with satellite tracking camera.