Last Tuesday night, a large number of amateur and professional astronomers located across Mexico, the US, and Canada took advantage of a rare and exciting opportunity: observe a blinking star while Pluto occulted it. In Southern California, the SETI Institute, the Observatoire de Paris, Unistellar, and Oceanside Photo and Telescope (OPT), one of the largest telescope retailers in the world, collaborated to observe this rare event and gather the precious data we need to understand Pluto’s atmosphere and climate. Here is our story.

Like most events in the world of modern astronomy, this one started with an email.

In February 2018, I sent my colleagues at the Observatoire de Paris a message letting them know that the eVscope was ready and able to observe occultations. We had by then already observed our first occultation, by main-belt asteroid 175 Andromache, from the south of France and I wanted to get input from Bruno Sicardy and Josselin Desmars, both astronomers at the Observatoire de Paris,  on the quality of the lightcurve we generated that night. Bruno, who replied a few days later, mentioned the existence of a very favorable upcoming occultation involving the dwarf planet Pluto. I was immediately intrigued because this type of observation is both more challenging and more rewarding than other occultations. The challenge comes from the fact that the occulted star is fainter than the ones involved in main-belt asteroid occultations (G=13, so almost 3 magnitude fainters than previous occultations observed with the eVscope). The reward comes from the fact that these occultations are the only way to monitor the atmosphere of the dwarf planet Pluto, including its density, pressure, and temperature profile. 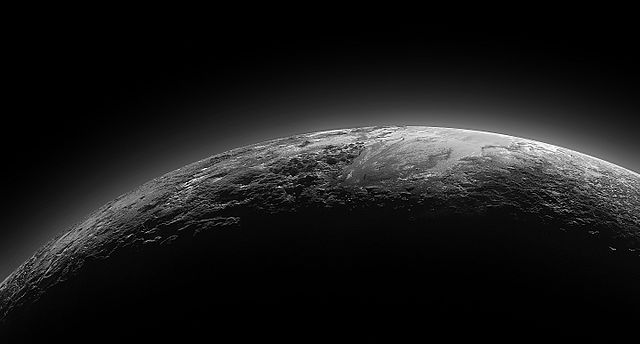 I was even more interested because of the context Bruno gave to this predicted occultation. Because Pluto is drifting away from the Milky Way, these kinds of events were becoming more rare, especially with such a bright star (G~13). And, as an extra kicker, the last occultation, observed in 2016, suggested that Pluto’s atmosphere was shrinking, and complex climate models suggest that the nitrogen in the atmosphere is coming from a large reservoir of icy nitrogen named Sputnik Planitia, a very bright area of Pluto, which is now cooling down because of the planet’s orientation with respect to the sun. In short, by combining high-resolution images from the New Horizons spacecraft with past studies of Pluto’s atmosphere, meteorological astronomers think that they are beginning to understand the climate of an exotic icy world located 7.5 billion kilometers from us. This occultation could be the key we need to validate one of their models and predict the evolution of Pluto’s atmosphere and its long-term climate.

The Lucky Star put together a web page that included all of the details about this occultation. This project is funded by the European Research Council (ERC) and managed by the Université Paris Sorbonne and the Observatoire de Paris. It aims to study Trans-Neptunian Objects (TNOs) using the stellar-occultation technique. Beginning in April 2018, when I visited the team at the Observatoire, we knew the event would be visible from an area that stretched from Mexico to the US and part of Canada, but occultation’s limits were quite fuzzy. This preliminary prediction was dramatically refined when the Gaia ESA mission released in April 2018 its second catalog (named DR2), which among the 1.3 billion star coordinates contains an accurate position of the occulted star ID 6772629170525258240. Using this new position and an orbital model of the Pluto-Charon binary system, the team refined the path of the occultation with an uncertainty of ~60 km, and a timing of less 10s. 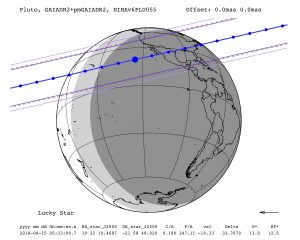 Path of the occultation on August 15 2018 by Pluto derived from the new GAIA DR2 catalog and the mutual orbit of the Pluto-Charon system (credit: Lucky Star)

We agreed that it was time to mobilize the troops and started contacting professional and amateur astronomers who have worked together on observing campaigns. Because our goal was to have an accurate snapshot of Pluto’s atmosphere, we knew we needed multi-telescope measurements from stations located along the entire path of the occultation.  Additionally, stations located near the occultation’s center, which stretched along a line from Cabo San Lucas in Baja California to New Orleans in Louisiana and all the way to  Atlantic City in New Jersey, could also detect the central flash that is caused by the bending of the star’s light by Pluto’s atmosphere. This flash is a gold mine of data for astronomers because it can tell us about the existence of low-altitude winds and hazes and the distortion of Pluto’s atmosphere. 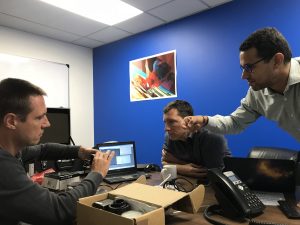 A few days before the occultation between Stefan Renner(IMCCE/U. de Lille) , Tim DeBenedictis (Southern Stars) and Franck Marchis (SETI Institute/Unistellar) met in San Francisco to inspect and learn how to use one of the occultation kits provided by the Observatoire de Paris (credit F. Marchis)

Several amateur and professional astronomers in California, Arizona, Texas, Louisiana, Indiana, and North Carolina committed to participate in the campaign using their own instruments, and the Observatoire de Paris sent some of them occultation kits that included a computer, GPS, and a camera, as well as their own crew of observers, including Stefan Renner and Jossellin Desmars in California.

In my case, I decided to escape San Francisco’s wonderful but often frustrating Karl The Fog, which blankets our beautiful city with natural air conditioning but also hides the stars, and traveled south to San Diego to maximize our chance to collect data with our eVscope prototype and to meet a large team of ProAm (professional and amateur) astronomers.

Earlier this year I met Chris Hendren, Director of Education at OPT, at the Unistellar booth at the Consume Electronics Show (CES). We discussed our interest in education and the many ways in which ProAm and the eVscope could collaborate in the future.  Naturally, I contacted Chris and his team to suggest that we form a station that used one of his telescopes and an eVscope to observe the occultation simultaneously. Chris confirmed that OPT was interested in working with us and would provide a large telescope, while the Observatoire de Paris contributed an EMCCD camera, a highly sensitive instrument.

We met at Lake Henshaw Overlook, a scenic place famous for beautiful views and dark night skies. A diverse team made up of four employees from OPT (Chris Hendren, Ian Lauer, Blake Estes, Rod Gallardy), a Ph.D. student from the Observatoire de Paris (Joana Oliveira Marques), a reporter from the Planetary Radio (Mat Kaplan), a SETI Institute lab assistant (Martin Costa) and I met at the overlook on August 14 at 7 pm. We quickly setup our stations, with Unistellar’s mighty eVscope prototype operated by Martin and me on one side and a Celestron C14 equipped with an EMCCD camera managed by Joana and the OPT crew on the other. This was truly a ProAm collaboration that included skilled workers from the worlds of academic research and for-profit companies. 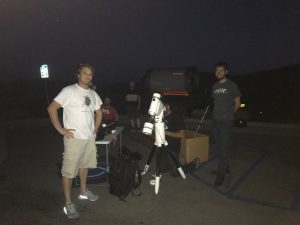 Our station at Lake Henshaw Overlook with an eVscope prototype and a large C14 with the OPT team from left to right Blake Estes, Chris Hendren, Ian Lauer (behind the mount), Rod Gallardy (credit: Franck Marchis)

The night was warm and the sky was perfectly clear. We had enough time to check and recheck our instruments to make sure that everything would be working at the time of the occultation. The Unistellar team used the eVscope’s Automatic Field Detection to point toward the star’s field of view and ran some tests. A few minutes before the predicted occultation time, both teams were ready and we began recording the event.

Time passed…We were staring at the EMCCD camera’s screen growing more fearful that something had gone wrong because it was not obvious that the star was disappearing as expected.  In fact, as the video from the eVscope shows, it did happen—we had just underestimated the fact that Pluto is only ~1.5 magnitude fainter than the star, so it was still visible with the powerful EMCCD camera.

With a feeling of relief, we stopped worrying and enjoyed the moment. We had succeeded in capturing this event and possibly contributing to scientific understanding of a very distant world. Some of us traveled from far away to witness this tiny blinking of a star, so it was time to pause and savor the feeling of a successful night under the stars.

Because we are all connected in our modern world, this moment of success was quickly amplified. Shortly after the event, my phone started beeping with notifications from other stations that had also captured the event. Some even reported the detection of the central flash, while others were not as lucky because of technical issues or poor weather. 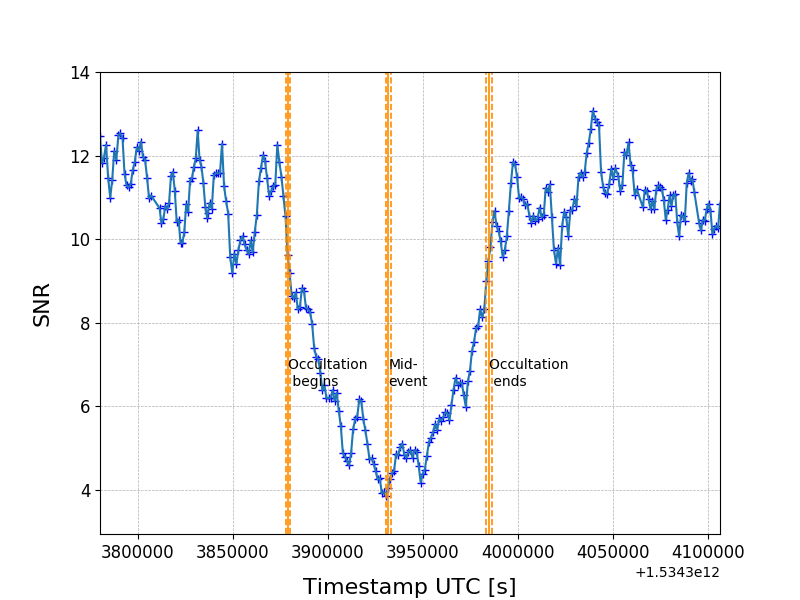 The Unistellar team in France quickly processed the eVscope’s data and confirmed that we had indeed captured the occultation. The preliminary lightcurve shows the presence of the atmosphere because of the gradual disappearance and reappearance of the star and confirms that the timing of the occultation was within the 10s accuracy. The team of astronomers working together that night will combine all of their lightcurves to draw conclusions about the current state of Pluto’s atmosphere. But we already know that the night was a success for Unistellar in that we validated the potential of our mighty prototype to observe astronomical events. It’s the goal of our company to democratize astronomy and allow all users in the future to participate in such scientific events. This was a useful rehearsal for Unistellar in that it not only to confirmed the capabilities of the telescope but also embedded our efforts within the context of a large community of ProAm collaborations.

On a personal note, I always feel the thrill of doing something unique and magical when I participate in this type of event. The preparation, the journey to an unknown place, the stress of setting up equipment is probably part of it. As an astronomer, this is a part of my job that I love. As a human being, it reminds me that I am lucky to have the opportunity to be part of something unimaginably bigger than me… the entire Universe.