It is getting more and more difficult to find a dark place, without night pollution and far from the smog of the cities, to be able to realize that we are part of a large barred spiral galaxy called the “Milky Way Galaxy”.  Seen from Earth, our galaxy will appear as a fuzzy arc in the sky commonly called the Milky Way and composed of 200-400 billion stars. This picture  taken by Tony Hallas, a mosaic of 24 frames taken in north of California, was shown in APOD on December 25 2009.

Our Galaxy is old with an estimated age of 13.2 billion years, almost as old as the universe. It is a large barred spiral galaxy with a diameter of 100,000 light-years. Even if it is not as big as Andromeda (1,000 billion stars), our Sun is one star among 200 to 400 billion of them. Our Solar system orbits around the center of the spiral galaxy at 25,000 light-years in 200 million years.

If you inspect this image in detail (zooming into it) you will be able to see the large amount of stars in our galaxy. Each star has a different color which is due to its size, temperature, and age, but also its environment.

Among these stars, 10% of them are similar to our Sun (20-40 billion G-type star with the same Temperature, size and Mass), and could have terrestrial planets like Earth. Astronomers have been working on catalogs of stars over 2 centuries. These catalogs contain their positions in the sky and their properties (size, mass, age, metallicity). It is only recently that astronomers tried to find stars with exoplanets and listed those which could have an habitable planets. Because there is a large amount of stars in our galaxy, this is definitely of tedious work. Several researchers at the SETI Institute have been involved in these projects for years. Their goal is to provide a detailed map of our Milky Way Galaxy containing the characteristics of these stars and their planets. These maps could be used by the future generations to explore these unknown worlds when the technology will be available.

Next time you go outdoor and you can enjoy the magnificent view of the Milky Way, you may  imagine one of these worlds. I bet that over there someone is looking at you and may be doing the same. 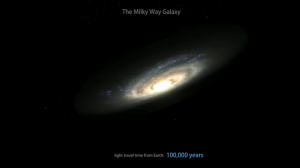 A computer-generated image of our Milky Way Galaxy seen at 100,000 light-years (Captured screen from The Known Universe by AMNH).