If you are lucky and the sky is clear tonight, search for a red bright object in the Cancri constellation (Cancer), not too far from the stars Castor and Pollux in the Gemini constellation. As you may have already guessed, this is not a star but Mars, the fourth planet of the solar system.

Mars is a very special place for planetary astronomers and for exobiologists. Called the Red Planet by the ancient astronomers, we  know that the weird color surface is due to the presence of rust (iron oxide). Over the past 40 years a large number of spacecrafts visited Mars, several of them are still orbiting around the planet, landed on its surface and become a static station or have been “trekking” for several years. These mission data combined with years of ground-based observations represent a large amount of information which are used to develop models of the Martian atmosphere, historical chart of the climate, and identify the composition of the surface. We can without any doubt say that this is the planet that we know the best after our own home planet.

This picture in natural color of Mars was taken on July 26 2001 by the Hubble Space Telescope (HST) which is in orbit around Earth. When Mars is observed at its opposition, it is at its closest distance from Earth and we can see details on the surface. The HST Wide Field Planetary Camera 2 image revealed interesting features on the planet, such as craters, the southern polar cap, and clouds. Today, we have better data coming from several missions and their instrument such as Mars Reconnaissance Orbiter in orbit around Mars since 2006. SETI Institute Planetary Scientists used these data to understand the composition of Mars and also the formation and evolution of its polar cap. They help making sure that these data are regularly implemented in Google Mars, so accessible in a handy way for the public and the future generation of astronomers.

The current conditions on Mars are particularly extreme. With a surface temperature of 55 deg Celsius below zero, atmospheric pressure of 1/100 Earth pressure, direct contact with UV light and solar electromagnetic storms, most of the Earth-based organisms will have a hard time to survive on Mars surface. We found life in extreme environment on our planet, on the top of the Chilean altiplano, in the lakes of the Antarctic, nearby the volcanoes in the deep ocean… Several scientists at the SETI Institute dedicate their research to study these extreme environments. Their research could be difficult since they need to go there, live there several weeks, to be able to install stations and collect samples. Their goals are to identify the best locations on the Mars planet to find similar extreme life, and determine a tracer (or a signature) to be able to detect them remotely using a spacecraft or a complex lander laboratory like MSL (scheduled to arrive on Mars in 2012-2013).

So when you look at the sky tonight and you see this planet glowing in red, don’t forget that even if it is at 109 million of km from us, it is anyway our close neighborhood. Like all our neighbors, we, the Earthlings, have a lot to learn from it. When we study Mars, we in fact understand more about our biosphere, our planet and ourselves. One day we may go there and we may find out that a few million years ago, we were not alone.

PS: If  an hypothetical Martian civilization had the capabilities to build a powerful telescope and looked at the blue dot in the sky, this is what they would have seen. 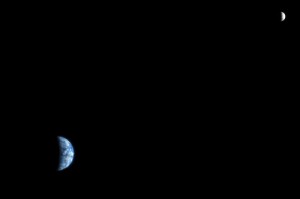 The Earth and Moon as Seen from Mars using HiRES, a powerful camera on board the Mars Reconnaissance Orbit. Credit: NASA/JPL/University of Arizona