We really walked on the Moon…

URGENT: possible impact on the southern pole of Jupiter?

Jupiter got a bruise.. only one but a large one.

We all heard about this conspiration rumors which claimed that the Apollo missions were never a success and nobody ever walked on the Moon. Just be reassured, I am not going to advertise this crazy theory 🙂 It is based on deformed facts and today we have some obvious proofs collected  by the Lunar Reconnaissance Orbiter and its high resolution camera.

Look at this picture released a few days ago: 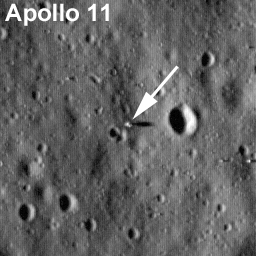 The arrow indicates the position of the Eagle, the lunar module of the Apollo 11 mission.

And now this one: 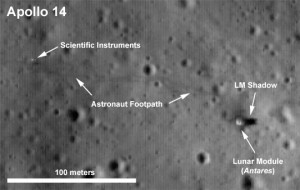 This image shows the landing  side of the Apollo 14. The lunar module (Antares) and the astronaut footpath are visible.

Simply incredible no?
The spatial resolution (a.k.a. the level of details) will increase as the LRO spacecraft goes down toward the surface, but it clearly demonstrates the  improvement achieved with the high angular camera on board the LRO.