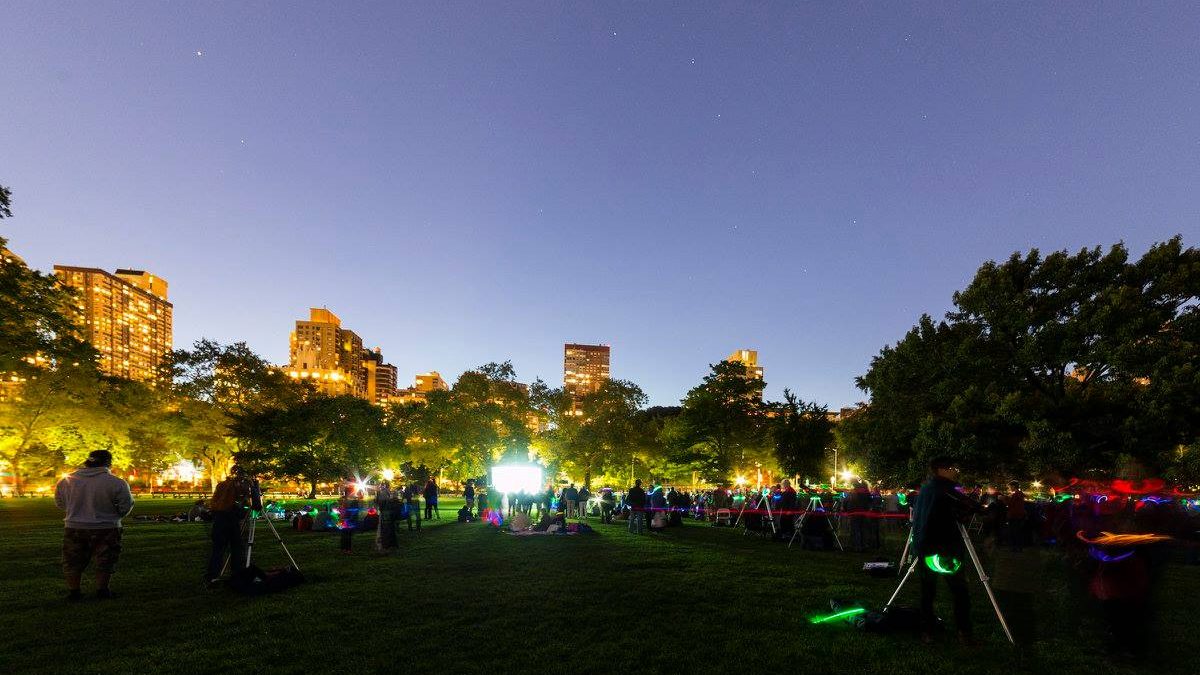 Last week I traveled from San Francisco to New York City to attend Autumn Starfest, which is sponsored by the Amateur Astronomers Association (AAA) of New York. This star party’s most amazing feature is its location—right in the middle of Manhattan, in the magnificent Central Park! And after flying 2,600 miles (4,100 km), I was eager to show attendees that the Unistellar eVscope will let them see faint targets in the night sky—even the sky of this immense city, with all of its light and other forms of pollution.

And the great news is that the event, and our telescope, were a huge success. 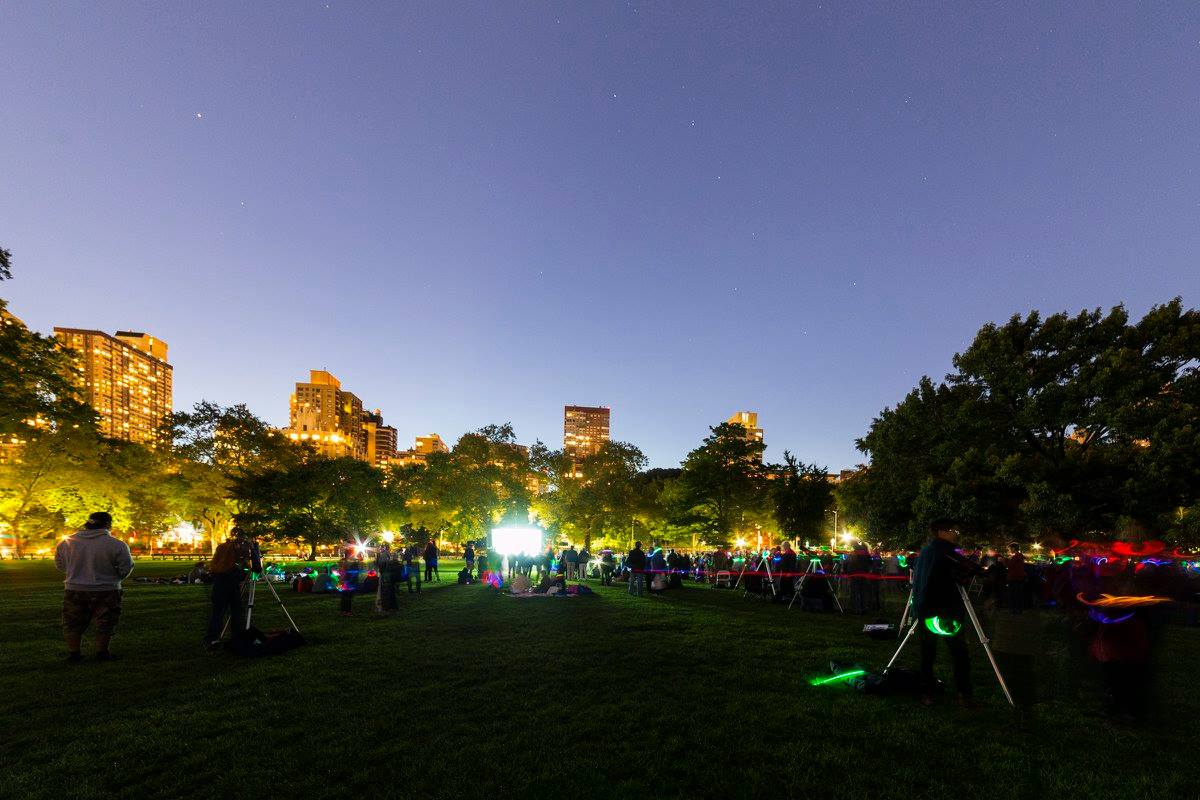 The setup of Starfest in Central Park. It was obviously not a perfect dark sky for astronomy, but a beautiful summer evening for the public (credits: Ed Rojas, AAA.org)

The eVscope was just one of many on display. I counted about forty telescopes of all sizes and shapes—everything from large 50cm Dobson telescopes to simple, smaller Galileoscopes, each operated by an AAA volunteer. The sky was clear, with no clouds and no moon. Yes, there were immense, brightly illuminated buildings all around us, but it was obvious that this would be a great night for star-gazing.

Initially, our telescopes attracted bystanders who entered the park to enjoy one of the last nights of summer, and were wondering what this army of heteroclite telescopes was doing. Soon, they were delighted to have the chance to see the beautiful rings of Saturn, among other things. All around me I heard people saying “I can’t believe I just saw Saturn’s rings.” Even though we can easily find photos of these beautiful objects everywhere on the web, it’s still awe-inspiring to see them for yourself using a small telescope. A lot of us became astronomers the first time we saw this special, unforgettable sight.

Because Unistellar’s eVscope is designed to observe faint targets in the sky, I had to wait for dark to start observing. The number of visitors started growing significantly, as did their impatience, since they were wondering why I was not yet observing anything in this strange new telescope. I must admit that at that point I could see only a handful of stars in the sky and was not certain this would work, since this was definitely the most extreme urban astronomy I had ever done.

Finally, at 8:30 p.m., I pointed the telescope to our first target, M11, the Wild Duck Cluster in the constellation Scutum (The Shield). Despite intense light pollution, the eVscope’s enhanced vision technology allowed visitors to see hundreds of stars in the cluster, which is 6,200 light-years away. Many were struck by its color, which is a function of temperature. People quickly started gathering around the eVscope, asking questions about the technology and what we were observing while waiting patiently for a look. And while M11 impressed most of them, M13, our next target, was definitely the “star” of the show.

This, the Hercules Globular Cluster, is well known and composed of several hundred thousand stars 22,200 light-years away from us. It’s impressive to see its colorful, bright stars in the eyepiece, if only because most people, including most of our visitors, had never seen anything like it. In addition to being awed by its beauty, those stars, which formed almost simultaneously in the same cocoon 12 billion years ago, are the vivid reminder that our galaxy is huge and home to billions of stars. It is very likely that around some of those stars there are hospitable worlds, or planets like ours. We can’t say yet if life, and even simple microbial life, exists there, but as Carl Sagan said “The universe is a pretty big place. If it’s just us, it seems like an awful waste of space.”

We concluded our observing with M57, the Ring Nebula. An invisible star in the constellation Lyra, it has entered in the last phase of its evolution and is dying. The star has ejected its upper envelope, which shines in different colors because of the gas that it is made of. This beautiful object entrances people because it is what our system will look like in several billion years. One day our sun will become a red giant and then a planetary nebula, which makes the Ring Nebulae a dramatic reminder that Earth and our solar system will not be here forever. Because Saturn had dipped below the horizon, several telescopes around us also pointed toward the Ring Nebula, but none of them revealed its true color or the details of its envelope. 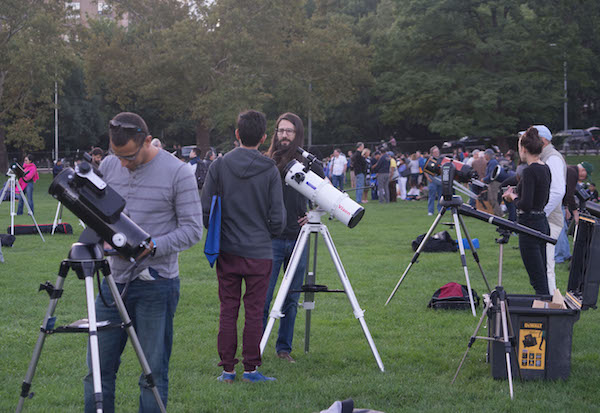 The line around our telescope grew much longer, and I think about 120 people looked through it before the evening came to a close. It was obvious to me that they were delighted to enjoy astronomy so close to home, since living in this huge city had caused most of them to forget all about the stars. Their children were even more impressed, since many did not know that there were so many stars, and so many worlds, out there.

Unfortunately, like all good things, our star party had to end. Visitors left, telescopes were packed away, and the park went dark and silent. My last view was of the towers that ring the park, outshining the stars once again, and serving as both a jewel and a curse of our modern civilization. I went back to everyday, normal, and noisy New York and enjoyed it one more time before taking off for my home and my family in San Francisco.

Thank you New York! It was a joy to see the stars that fill your night sky, and meet many of the wonderful people who call you home.