Last Tuesday July 19 at 3:25am PDT, several SETI REU students and colleagues from SETI institute and Observatoire de Paris were on the road. They were looking at the sky with  tiny telescopes and surrounding by complex instruments somewhere in the middle the Californian countryside to witness and record a rare event: the occultation of a bright 7-mag star by the double asteroid (90) Antiope.

(90) Antiope is clearly a remarkable and unique binary asteroid. It is made of 2 large (~86 km) ellipsoidal components orbiting around their center of mass in 16.5 hours, describing a circular orbit with a separation of 171 km. Shortly after its binary nature was discovered in 2001, our group initiated a study of this body by combining adaptive optics observations from the VLT and Keck telescopes and lightcurve observations coming from a worldwide network of small telescopes. From this work, we derived a shape model of the components, showed that the system has a low density (~1.3 g/cc) implying a rubble-pile interior. (90) Antiope double system could be a fragment of the catastrophic disruption of a large asteroid called “proto-Themis” which happened 3.5 Byrs ago. The formation of the binary system itself remains unexplained, but we revealed by a detailed analysis of various lightcurves that one of the components may have a 60-km diameter bowl-shaped crater. More recently, we conducted a spectroscopic study of both components and found out that their spectra are identical implying the same composition and the same age for their surface.

We concluded that a proto-Antiope of 100km formed by accreting fragments from the proto-Themis, so with a rubble-pile interior, was impacted at posteriori by a 15-km fragment of the larger Themis collisional family which spun up the asteroid and split it in two components. This is indeed a nice story but it still has to be proven to be true. To this purpose we could wait for a 30m-class telescope to be finally built and to record an image the components to confirm the existence of this crater, or we could send a spacecraft around 90 Antiope to analyze in detail the surface and structure of the components. Those steps are expensive and far away in a very uncertain future, so we had to find an easier and cheaper way, and then came along this stellar occultation…

Francois Colas, a colleague from the IMCCE at Observatoire de Paris, contacted me a year ago to let me know that (90) Antiope will be occulting a bright 7-mag star. An observer located on the narrow ~100km path crossing California, Montana, and the province of Saskatchewan will be able see this star disappears for several tenths of seconds due to the asteroid blocking its light. The asteroid is fainter than the star (V~12) so invisible to an observer equipped with a small telescope or binocular. Using our orbital model, we predicted the relative position of the 2 components at the time of the occultation and found out that they will be well separated, allowing observers spread along the path to derive the size and shape of each component and possibly confirm the existence of this crater.

This exceptional event got also the attention of the IOTA (International Occultation Timing Association) led by David Dunham who decided to have their annual meeting at Rocklin, CA, on the path of the occultation and on the weekend before the event. To be successful, an occultation must be observed by a large number of observers which provide “cords” defined by their precise location on Earth and the timing of disappearance and reappearance of the star. Combining these cords, one can derive the shape and size of the asteroid, and in the case of (90) Antiope, the shape of its components. In the 1980s, the first occultation cords were recorded manually. Today several amateur and professional astronomers are equipped with instruments allowing them to record the data with a much better accuracy (less than 1/10th of second and a few meters in location). My colleagues from IMCCE, J. Berthier, F. Vachier and F. Colas flew to California with 6 occultation sets which are made of:

– A Grabber Dazzle + laptop to capture the video 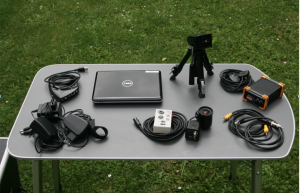 We had a meeting at the SETI Institute on July 1 where I described the project to the REU students and 7 of them volunteered to this new project. Three of my students, Keaton Burns, Emilio Enriquez and Mathieu Allain also enrolled the project as lead-drivers. Peter Jenniskens, also a researcher at the SETI Institute, contributed to the campaign, by providing additional cameras and his time.

Unfortunately, because I had to fly to Europe, I had to miss most of the fun. My colleagues kept me posted through our email list and via Skype. Four sites labeled A,B,C D were chosen in coordination with other observers from the IOTA annual conference. Each of them had 2 to 4 stations separated by a few kilometers. The map above shows the stations for the site B which were located near Harrington, CA on the path of the southern component of the double system.

Jerome Berthier sent me a picture of his station shortly after being set up. All IMCCE-SETI stations were ready around 11pm. 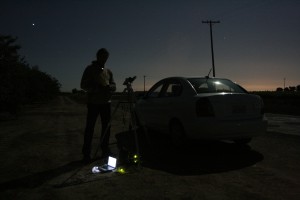 One of the IMCCE-SETI station ready for the stellar occultation (C) J. Berthier

At ~3:25am PDT on July 19 (10:25 UT), the 6.7-magnitude star HIP 112420 or LQ Aquarii was indeed occulted by the double asteroid system (90) Antiope. Because the weather was clear, and the prediction quite accurate several stations reported a positive detection, including six of our IMCCE-SETI stations.

Jerome Berthier prepared a video based on its observations shown below. The occultation lasts only 6 seconds suggesting that he was located at the edge of the components.

Stellar Occultation by 90 Antiope observed on July 19 2011 from Franck Marchis on Vimeo.

Stellar Occultation by 90 Antiope observed on July 19 2011 (2) from Franck Marchis on Vimeo.

The data are being gathered and will be processed soon. We hope to be able to refine the size and shape of the components of the asteroid. This is a long process which may be complicated by the possible binary nature of the occulted star.

This campaign was a fun team project with a strong involvement by several SETI REU students (Jennifer Cooper, Meridel Philips, Ross Cawthon, Jennifer Minteer, Wyatt Meldman-Floch, Joshua Fizelle, Shannon Hicks) that I would like to thank for volunteering to this project. The help of my students Emilio Enriquez, Keaton Burns, Mathieu Allain of the SETI Institute and my colleagues, Jerome Berthier, Francois Colas, Frederic Vachier of IMCCE, and Peter Jenniskens, Cynthia Philips from the SETI Institute has been crucial to collect these data.

In a few weeks, we may finally know a bit more about the mysterious (90) Antiope double system. Crater or no crater, that’s the question.