Today NASA announced three future key missions preselected as part of the Discovery program named GEMS, TiME and Comet Hopper. This is an important announcement, which was anxiously eagerly expected by our community.

The NASA Discovery program is a low-cost mission ($425 million FY2010) program aimed at developing and support well-defined and narrow-range science mission in the field of planetary exploration. Discovery is a dynamic and highly valuable program which had led to a lot of well-known missions with a wide range of scientific goals including (adapted from Visions & Voyages Decadal survey):

With the exception of the CONTOUR mission, all spacecrafts launched in the framework of Discovery program were a success. Because of their robustness several spacecraft had their lifetime extended and they were reused for a new mission with different scientific objectives. For instance, after exploring the comet Tempel 1, the orbiter were renamed EPOXI and was used to characterize exoplanets by transit and flyby the comet 103P/Hartley.

In 2010, NASA released an announcement of opportunity for a 12th Discovery mission with a potential launch before end of December 2016. A panel of scientists and engineers from NASA and elsewhere reviewed 28 submitted missions. These missions encompass all bodies of the solar including asteroids and comets, which have been traditional targets for the Discovery missions because of their proximity. However the 2010 Announcement of Opportunity was slightly different since it included as well the use of Advanced Stirling Radioisotope Generator (ASRG) developed by NASA and the US Department of Energy. This radioisotope power system is more efficient than the previous generation and works without solar panels  allowing planetary scientists to envision longer missions and giving us access to less hospitable region of our solar system.

This is an important first step since the leading teams of these 3 preselected projects will receive $3 million from NASA to validate their concept and refine the design of the spacecraft. In 2012, another panel will meet and choose the mission which will be selected for Discovery-12 and launch in 2016 or before. For planetary scientists in the US and elsewhere, this pre-selection is important since it gives us an idea of the future projects in our field and it could influence the direction of our future research. 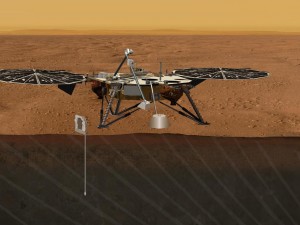 An artist rendering of the GEMS lander on Mars

The Geophysical Monitoring Station (GEMS) will perform for the first time an in-situ investigation of the interior of Mars. With this lander station, Bruce Banerdt from Jet Propulsion Laboratory and his team propose to understand the formation and evolution of terrestrial planets through the study of Mars interior structure, its level of tectonic activity and meteor impact flux. GEMS will carry a seismometer, a self-penetrating mole system to measure the temperature of the interior of Mars, radio tracking device to measure with great precision the dynamic rotation of Mars. The team mentioned in their 2010 Fall AGU conference fall abstract that they can propose a mission to Mars which fits into the budget of the Discovery program by reusing the Phoenix spacecraft design, its technology and its landing system. The Jet Propulsion Laboratory which also managed the Phoenix mission from Aug. 2007 to Nov. 2008 would be in charge of this mission. The scientific objectives of this mission are ambitious but crucial in the context of the Mars exploration and the understanding of terrestrial planets. 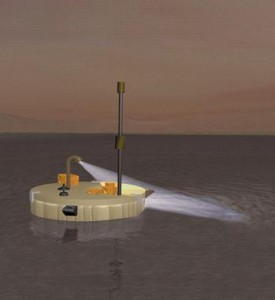 Artist rendering of the lake lander probe TiME (from Wikipedia)

The Titan Mare Explorer (TiME) is definitely in my mind the most original mission ever envisioned in the field of planetary science. It all started in 2007-2008 when lakes and seas were discovered in the northern hemisphere of Titan, satellite of Saturn. The chemistry of these lakes, their role in the methane cycle of Titan and the seasonal variability is unknown and will remain unsolved even with the presence of the Cassini spacecraft in orbit around Saturn. The TiMeE mission led by Ellen Stofan from Proxemy Research proposes to determine the composition and depth of these seas, their variation over time and their relation with meteorology and the geography of their surrounding. After a launch in January 2015, and a cruise of 7 years, a lander will separate from the spacecraft and “splash” on Ligeia Mare, one of the large Titan seas, for at least 3 months. This first nautical exploration of an extraterrestrial sea could be a unique opportunity to study a place with a methane cycle analogous to Earth’s hydrologic cycle. The instrument payload of this mission is not well known. The Applied Physics Lab at Johns Hopkins University would manage this pioneer low-cost mission for the outer planet exploration. I am betting that we will know more about the science objectives and the instruments on board this “boat lander” in the future. 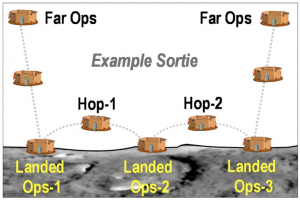 The Comet Hopper (Chopper) mission led by Jessica Sunshine from University of Maryland was conceived shortly after images collected by various spacecrafts of Tempel 1, 81P/Wild 2 and 19P/Borelly comet nuclei revealed a great diversity among them but also on each individual body. To understand this heterogeneity the team proposes to study in detail a comet over its full revolution around the sun. The concept was presented at the ACM conference in 2008 and they identified as a target the comet P/2004 R1 (McNaught) with a period of 5.4 years. The spacecraft will “hop” on the small comet nucleus and collect data about its surface composition and properties. Taking advantage of the weak gravity of the comet nucleus, it will be able to go back in orbit (a “sortie” as shown in the figure above) and remains around the nucleus to study as well the cometary coma to understand the link between the surface activity and the cometary activity. Once again, the use of nuclear power source allows the mission to remain active for a long period of time. The NASA’s Goddard Space Flight Center would manage this mission. The image above depicts the Comet Hopper concept and its ability to land at multiple sites of a comet nucleus.

So that’s it. I can anticipate a lot of disappointments in our community. I know several members of proposed missions who spent a lot of time developing their mission concept, putting together a team of researchers and engineers and writing this document. Unfortunately it is not possible to select all these missions. I am not personally involved in any proposed and preselected missions but I had of course my preferences for missions toward asteroids, in particular multiple asteroid systems (asteroids with moons), or toward Io to finally understand the origin and evolution of this exotic volcanism.

On a bright side, the recently revealed decadal survey in planetary science emphasized the need for regular, predictable, and preferable short (≤24 months) cadence for Discovery announcement of opportunity releases and mission selections. If NASA follows this recommendation, in May 2013 I should write a new post on this blog about the preselected missions for Discovery-13. The fun part of this job is that we don’t know what scientific and engineering discoveries will be made in the next 2 years. Because the priorities in planetary science can change radically, these Discovery missions are definitely the best way to make great discoveries on emergent research topics.

Congratulations to the preselected teams.