Just a short post today. I am still recovering from the SETIcon. I will tell you more about it soon. An image is worth a thousand words so just look at this picture taken by Messenger Spacecraft. 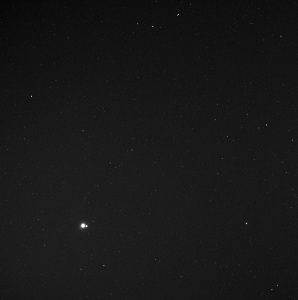 The Messenger spacecraft is looking for Vulcanoids, an hypothetical population of asteroids which could be orbiting between Mercury and the Sun. Messenger is a space mission currently in orbit around the Sun which a perihelion nearby the planet Mercury orbit. This mission is, therefore, perfectly located to find these asteroids.

When this image was released, the first thing which came in my mind is that Messenger had discovered a binary vulcanoid system. This is typically what we see when we image a binary asteroid system with an adaptive optics system using the Keck-II telescope. Well, in fact, this is NOT an asteroid system, but a very famous binary system that we all know quite well. The Wide Angle Camera of Messenger captured a picture of the Earth-Moon system. The brightest dot is our planet and the nearby faint one is the Earth’s Moon.

Several space missions took pictures of our home. This kind of images has a technical, philosophical and esthetical interest. The first images of Earth was taken by Lunar Orbiter in 1966 and Zond-5 in 1968, two space missions toward the Moon launched by the USA and the Soviet Union respectively. Since then, several spacecrafts captured images of our planet while flying by (like Galileo spacecraft) to calibrate their on-board instruments. Missions en route to the outer part of the solar system  like Voyager or more recently the Cassini spacecraft were also used to picture our home giving us an idea of their remoteness. This Messenger image is the first picture taken from the inner edge of our solar system.

I am attaching a few pictures taken by these missions, showing our planet as a “pale blue dot“. Looking carefully you should find our planet on the first 2 images. 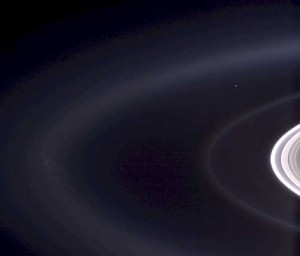 Earth and Moon seen by the Cassini Spacecraft in orbit around Jupiter (Sept 2006). 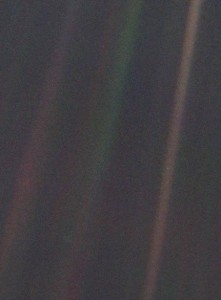 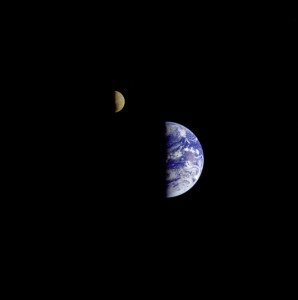