Already three nights on the telescope and we still have no fringes… It looks worrisome but in fact we anticipated difficulties in installing FIRST prototype which is essentially a lab testbench on the Shane telescope. The good news is that every night we have made significant progresses and we identified several sources of problems. So we remained positive and continued  improving the instrument and understanding how to use it on sky. 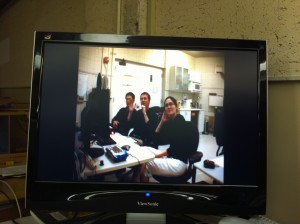 Takayuki, Guy and Elsa ready to start the observations at Lick Observatory and seen from the video conferencing system at UC-Berkeley

On Tuesday July 27, I had to go back to San Francisco. Consequently I participated to this night via the videoconferencing system and a secured VNC connection while located in the UC-Berkeley remote observation control room. 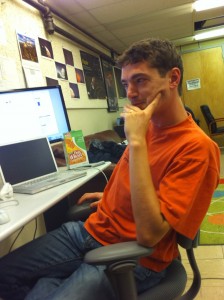 Gaspard Duchene, researcher at UC-Berkeley, and his favorite Thin wheat crackers. They are supposed to bring us luck!

At 8:30pm, everybody was already ready in the telescope control room. We were joined by Gaspard Duchene, another researcher at UC-Berkeley, who is interested in the potential of FIRST for scientific studies such as multiplicity rate of nearby stars and interaction with their circumstellar disks. Gaspard is an expert on low mass stars multiplicity and he has been using AO systems for years.

After a few erratic telescope and dome issues, we could finally point the telescope on Vega, one of the brightest star located nearby the zenith. The seeing which was mediocre at sunset but slightly improved at 10pm. We could also see the improvement in the stability of the AO correction. As soon we finished the injection, we noticed a significant change on the display of the data received by the detector. Several frames were showing a pattern of lines which is characteristics of interferometric fringes.

It took us a while to realize what we were watching but after several minutes staring at the screen and recording data we had no doubt, we got these fringes! We confirmed their genuineness by observing several other bright stars during this night. An preliminary analysis made in real time by Julien Woillez, our colleague at Keck Observatory, confirm their reality and show that at least 4 fibers were interfering during this first successful night.

It was a fantastic feeling to see finally materializing on this screen what we have been working for several days, months and even years for some of us. I must admit that I also felt relieved to be able to say that we did not waste precious telescope time at the Shane telescope. In a few seconds, the pressure that we had built up in our mind, vanished and were replaced by a clear moment of happiness and proudness. We don’t have a lot of moments like this one in a career of astronomer, so I am glad I have this exhilarated feeling again.

I agree with you that this blurry image does not look very impressive for non-specialists. I should explain that they contain a lot of information on the star that we are observing. After analysis, we may be able to derive the size of the star, its shape, if it has a companion and its nature (star, brown dwarf, exoplanet) and its close environment. This analysis is a complex numerical process which will be explained in another post. 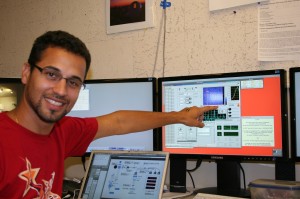 Happily showing the fringes that we obtained with FIRST on July 28 UT.

I am attaching below a video that I captured with my cellphone shortly after realizing that we did succeed in getting the first fringes with FIRST instrument on Vega. The video is a bit confusing since it is difficult to hear what the observers located at Lick Observatory are saying (in French) but it shows you how happy, but still focused, we all are.

First light of the FIRST instrument on July 27 2010 from Franck Marchis on Vimeo.

That’s all for today…