A new post on this blog is long overdue. I am busy as usual but I have been as well traveling a lot recently… and it is not over. Before telling you about my great trip at ESA-Madrid where I was a few days ago, I  would like to mention  recent developments in our numerical deconvolution method, called AIDA, which was done in collaborations with a group of students from the Clinic program Harvey Mudd College.

On May 4th, I attended the Project Day at HMC, a private college located in southern California in Claremount which offered several maths, science and engineering majors. “Mudd”, as the students call it, maintained a specific program called Clinic to involve their student in practical projects in collaboration with industries and research laboratories. Eliot Young, a researcher at SWRI, submitted one project to this interesting program to test and improve AIDA.

AIDA is  a deconvolution algorithm, product of a collaboration with the fluorescent microscopy group of John Sedat at UCSF that we developed in 2007 (See Hom et al, 2007). Four students, Jeffrey Burkert, Bryce lamp, Taiki Sakai, and Jason Wyman worked on this project under the supervision of their Mudd Professors: Weiqing Gu and Hank Krieger. 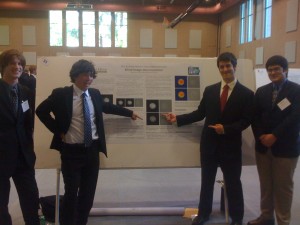 The HMC students in front of their poster

They  tried to implement several  new techniques  to improve the deconvolution of an image of Io, satellite of Jupiter known for its active and exotic volcanism. This observations was taken recently by my group with the Keck II 10m telescope on August 16 2009. They showed that the implementing  a finite-difference algorithm in AIDA code significantly improved the data processing and revealing a clear signature of an active volcano (named Loki) 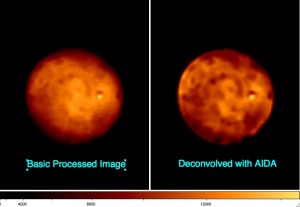 Most of the images collected with Adaptive Optics are processed at posteriori to improve their quality and to reveal fine details. We have been using AIDA on a wide variety of images in astronomy collected with from HST, Keck AO, VLT AO. This algorithm is in fact directly derived from MISTRAL (developed by a team at ONERA).  Our more efficient and stable open-source program (code in Python with a few modules in C) is also used by biologists to process microscopic fluorescent images. Working with this group, I was amazed to see that they can now collect real time movies showing the dynamics of the yeast microtubule or the reaction of cells in the retina of human eyes. Like us, astronomers, for their data analysis they also need to reveal the finest features in the images.

This work initiated in 2007 has been an enlightening experience to me. It clearly revealed that the world of science is connected. Even if we do not share the same scientific interests, astronomers and biologists, as all scientists, have the same needs, therefore we often wish to develop the same tools.