Binary asteroids and good Omens – the dilemma of observers

I am back… Jupiter Impact 32 days after its discovery

A fantastic night at Keck observatory – A follow-up

I am in Hawaii on the Big Island preparing our observations at Keck Observatory for tonight. If the weather gets clear, it is going to be an interesting night. My main program tonight is to search for companions of asteroids around S-type asteroids, meaning asteroids with a “rocky” composition.

For this purpose and with the help of Jerome Berthier and Frederic Vachier, my colleagues at the IMCCE, we selected from an initial list of the first 10,000 asteroids which ones are bright enough (magnitude of 13 at least), observable (elongation of 60 deg or more), and classified as S-type from the Bus and Binzel (2001) taxonomic catalog. So my final list of targets contains 45 asteroids with names like Prospertina, Klytaemnestra, Eros, Punkaharju, Julia and so on…

So now will start the cruel dilemma of choosing which ones I will observe, knowing that I have only one night of observation per year in average at Keck. From my experience with Keck telescope and its adaptive optics system, I know that I will not be able to observe more than 30 targets tonight considering also that I want to observe Io and Jupiter as well. So which one will I choose? I have different way of selecting the “chosen ones” during the night, some rational and completely irrational methods.

Then we enter in the irrational method… Even after these last selection processes, if may be possible that I have to choose between 2-3 of them during the night. In this case, I chose those which could be a good omen for the program. For instance tonight, the asteroid 138 Tolosa could be one of the targets, I will most likely observe it since “Tolosa” means “Toulouse” in Occitan language (romance language from the south of France, same root than the Catalan) which is the city where I did my under-graduate and graduate studies. I also hope that observing 101 Helena will bring me luck since it is the name of my younger sister. 🙂 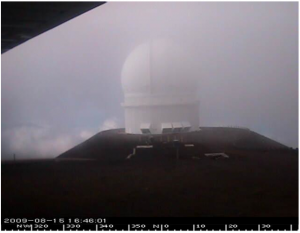 Captured picture from one of the webcams located at the summit. The summit is in the fog... 🙁

But let’s go back to the science, why is it important to find binary asteroids? A simple consequence of a discovery is that using the orbit characteristics of the moon, one can derive the mass and then infer the bulk-density of the asteroid. Most of the asteroids that were discovered with Adaptive Optics systems (large separation 10-20 Radius primary and a few km in diameter) are part of the C-complex, meaning that their composition should be similar to carbonaceous chondrite meteorites. I am still puzzled by that, and I wonder  if this is an observational biased, considering that ~70% of the main-belt asteroids are from this class or if it is it linked to the formation scenario for these binary asteroid systems (catastrophic disruption and re-accumulation or impact ejecta have been mentioned). The goal of this program is too answer to this question… I will definitely need more than one night for that.

Tonight,  I wish the clouds will go away (see above :(), then if Helena and Tolosa are together real good Omens, we may have an interesting night. I still hope to have a discovery like in September 2008 when we detected two moons around 216 Kleopatra using also the Keck AO system.

I am asking too much… for the moment, let’s make these clouds and the fog go away. It will allow us to open the dome and start taking flat-field. I am going to buy Poke and wait patiently.

Franck M.
PS: you can check on time the weather at Mauna Kea on the all-sky camera 2.2m Mauna Kea All-Sky Camera