I am back… Jupiter Impact 32 days after its discovery

Binary asteroids and good Omens – the dilemma of observers

So after the Jupiter Impact and the madness which followed, I got buried into a lot of work. Today, I will not post much but a brief summary of my past two weeks. 🙂

I spent a significant amount of time getting telescope time and preparing the observations for the VLT/NACO and WHT/NAOMI. Both telescopes are available in service observing, meaning that I don’t have to conduct myself the observations. However one needs to plan accurately as possible the way the observations should be conducted. The observing modes, pixel scale, filters, sky positions should be defined advance. ESO has developed a software called P2PP (a.k.a the nightmare of all observers) which helps in planning the observations. Each defined set of observations (called OBs for Observing Block) are then run by the astronomer in duty. In the perfect world, the OBs will be perfect and the astronomers will not have to do anything.

The reality is quite different. To summarize, I did screw up my NACO OBs but I found out 4 hours before the observations (on Saturday afternoon), and sent them a correction… that they never received because the network was down at Mount Paranal. Our run was saved by the astronomer in duty (Emanuela Pompei, Thanks!) and we got some observations of Jupiter impact with NACO on July 26 (6 days after the discovery of the impact). I am attaching below two RAW images showing the impact feature at 2.48 um. The image on the right has most likely a better angular resolution, and the “duck-feet” feature is still visible. At low resolution (on the left), two maxima only are visible. 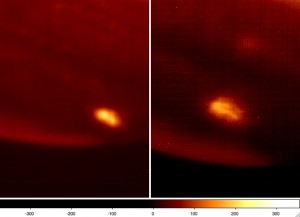 Two raw images taken with VLT/NACO at 2.48 micron. The impact feature is bright at this wavelength range 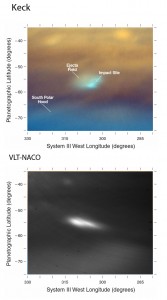 Comparison maps of the Keck and VLT data taken on July 20 and July 26 UT. The shape of the impact has changed over 6 days. Two maxima seems to be still present but they are now separated by 8 deg instead of 3 deg

My colleague R. Hueso, from the University of Basque Country, interrupted his vacation to de-project the left image (see on the left) and compare it with the Keck observations. The two maxima are now barely visible, they are separated by 8 degrees (instead of 3 deg) and the ejecta field is more extended. The continued longitudinal shearing is consistent with several amateur observations of the site (see below) and with the behavior of the impact sites associated with the impacts of SL/9 in 1994. 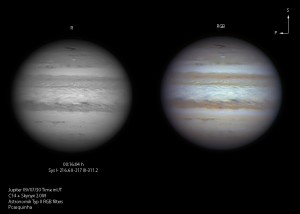 Observation of Jupiter collected on July 30 by P. Casquinha in visible. The shape of the impact feature changed in 11 days due to high altitude longitudinal wind shear.

The WHT and the TNG data are still being processed so I am not going to say much about it yet. We will also try to have an additional run of observations with the VLT/NACO instrument. Since unfortunately the last three opportunities were missed. I guess we should wait for all the data to be collected to get a clear understanding of what we observed so far, combining for instance near-infrared, thermal and visible data.
Tomorrow I will write  about something less technical and more fun.:-) I am leaving to Hawaii on Friday to observe at Keck Observatory on Saturday night. I will then take 10 days of family-beach-sun-fun vacation time. No jupiter impact will interrupt them (hopefully).
Cheers
Franck M.
Share
0