The demise of a mission – Kayuga crashed on the Moon

European parliament – The results per country in real time

Two new missions toward the moon in one rocket

I am back from AAS in Pasadena, CA where I gave a talk on the use of Adaptive Optics to study Multiple Asteroid Systems. This is my last professional trip for the summer since I just hired 2 students to work with me until mid-Aug. Today I am writing a brief post about the demise of the Kayuga mission which was sent to crash on the moon surface.

You may remember my previous post about the Kayuga mission, which is a lunar-dedicated mission developed by JAXA, the Japanese Space Agency. This mission was launched on September 14 2007  and aimed at study the moon origin and evolution, mapping the surface with an unprecedented spatial resolution in visible and near-infrared wavelength range. Kayuga consists of a Main orbiter and two small satellites (“OKINA”(Relay Satellite) and “OUNA”(VRAD Satellite)). The relay satellite was relaying the communication between the Main orbiter and the ground station. The VRAD satellite was a tool designed to measure the gravitational field around the Moon.  In its optimal configuration the main orbiter was at 100km  altitude in a peripolar orbit to be able to map the entire surface of the moon in one year.

The data provided by the spacecraft are still being processed and analyzed. The mission was certainly a success scientifically but also managed to resuscitate the interest for the Moon from the public. Most of us have seen the superb HDTV movies recorded by one of the instruments on board Kayuga. On Feb 2009 the spacecraft captured for instance a penumbral lunar eclipse. Toward the end of the mission in Feb 2009 the spacecraft was put in a lower orbit (50 km then 10-20 km) to measure the Moon’s magnetic field and got better images of the surface. The goal of this mission was also to provide materials for a mankind exploration of the Moon in the near future.

It is also sad to terminate a mission, but financial priorities linked to  the development of a new and better mission (Kayuga 2) need to be considered as well. Kayuga provided enough data for the astronomers and geophysicists and the priority is also to be able to correctly analyze these data and publish them. The JAXA scientists decided to terminate the mission by an uncontrolled crash on the surface of the Moon. They chose to slam the spacecraft into the Moon at 18:25pm (GMT) on Wednesday, June 10, 2009, at coordinates 65 South, 80 East. The impact in the lower-right section of the moon’s near side (see attached images below). The New Scientist reported that because the probe is coming in at a very shallow angle – nearly parallel to the ground – it has a high chance of skipping across the surface, like a stone across a pond.

Ground-based observers from a large area surrounding the Indian ocean containing a large part of Africa, India, and Australia (see attached map below)  might be able to spot a plume of dust raised by the impact, if it is backlit by the sun. A few hours ago, two Australian-based astronomers Jeremy Bailey and Steve Lee reported the detection of the impact (image attached) using the Anglo-Australian 4m-Telescope and its infrared imager named IRIS2. They posted their images on Picasa (attached below). It is very likely that other astronomers amateur and professional also detected this event. The analysis of the data will help to contrain the properties of the surface, determine the location of the impact and if some spectra were taken, it will be possible to estimate the composition of the material in the interior of the Moon… especially detect if water is present underneath the surface of the southern pole. More news soon!

Four frames recorded with in the near-infrared using the 4m-AAT telescope. The impact of Kayuga on the surface of the Moon is detectable on frame #2 and become fainter on frame #3 and #4 (1s exposure) (Credit:Jeremy Bailey and Steve Lee) 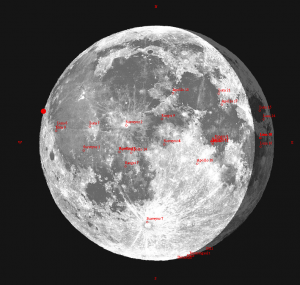 View of the Moon at the time of the impact (june 10, 18:25 GMT). The impact happened on the Southern pole of the moon, near the terminator in the dark area. Nearby craters such as Gill and Hale are labeled

Earth map at the time of the impact. The crash was observable mostly from an area surrounding the Indian oceanin Africa, India, and Australia.