The Russian Meteor and Lessons Learned on Meteor Impacts

Act now! Save Your Science from Sequestration

Almost 12h after the event, it is time to gather my notes on the Russian meteor event (#RussianMeteor) and my thoughts on this impact and those which may come soon. 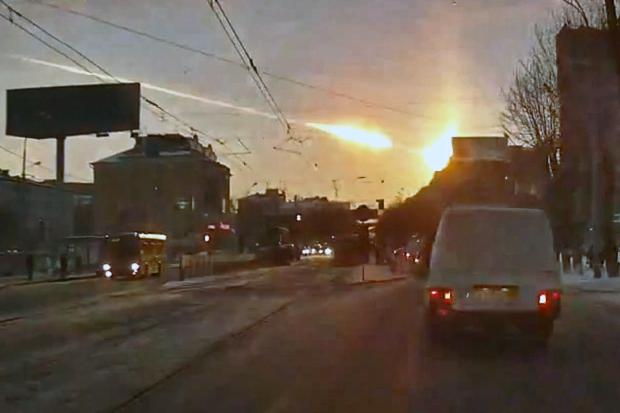 Meteor captured from a dashboard camera near Chelyabinsk, Russia

What do we know?
(I collected these pieces of information from numerous of my colleagues. Thanks)

Today February 15 2013 a meteor exploded over the region of Chelyabinsk, Russia near the Southern Ural Mountains at 9:20:26 am LT (03:20:26 UTC). The explosion  occurred at an altitude of ~15-20 km  and the bolide impact speed was estimated to ~20 km/s with a trajectory oriented from North-East to South-West. Almost instantaneously,  several recordings of the meteor impact were available on the web, thanks to the presence of dashcam in most of the Russian cars and also because this part of Russia is heavily populated. On a side note, this event puts an end to any romantic Valentin Day’s dinner that most of the Californian astronomers had planned, since it was still Feb 14 for us.

The explosion, or sonic boom, was recorded by several instruments including an infrasound station from University of Western Ontario, USGS seismometers  and the Meteosat-9 geostationnary satellite.   The blast caused significant damage in the area (see the video above) and several hundred of people were injured, mostly because the shockwave blewout windows. I read one report of a factory building with a collapsed roof.   The contrail has this weird dual shape, possibly because the meteoroid split in half shortly after entering in Earth’s atmosphere.

The entry of the meteor was definitely at low angle, so the blast is due to the sonic boom, not to a direct impact. In other words, the meteor fragmented in Earth’s atmosphere. The presence of several small impact craters has been mentioned but not confirmed yet. One of them is a hole in a frozen lake and the Russian media reported that divers will start tomorrow to search for fragments at the bottom of the lake. 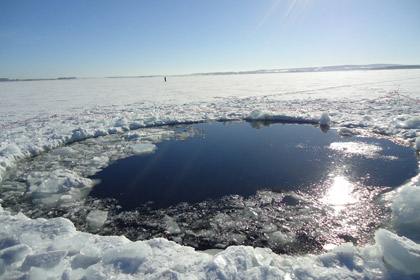 There are several back-of-the-envelop estimates of the size and mass of the body but roughly the bolid had a diameter of 15m, a Mass of 7,000 tons (assuming a rocky density of 3 g/cc) . NASA scientists claim that the explosion was due to the largest rock crashing on the planet since Tunguska in 1908 (energy 10-15 MegaTons of TNT equivalent). Peter Brown, from University of Western Ontario determined a total energy of 300 kilotons of TNT equivalent  for the Russian meteor, so ~20 Hiroshima bombs.  It was  larger than  the Oct 2009 Indonesia event (50 kTons TNT  eq) and Sikhote-Alin fall (Feb 1947,  10 kTons TNT eq).  Interestingly, based on the statistical study of near-Earth asteroid population, we can estimate that a #RussianMeteor-like event should happen every ~30 years. 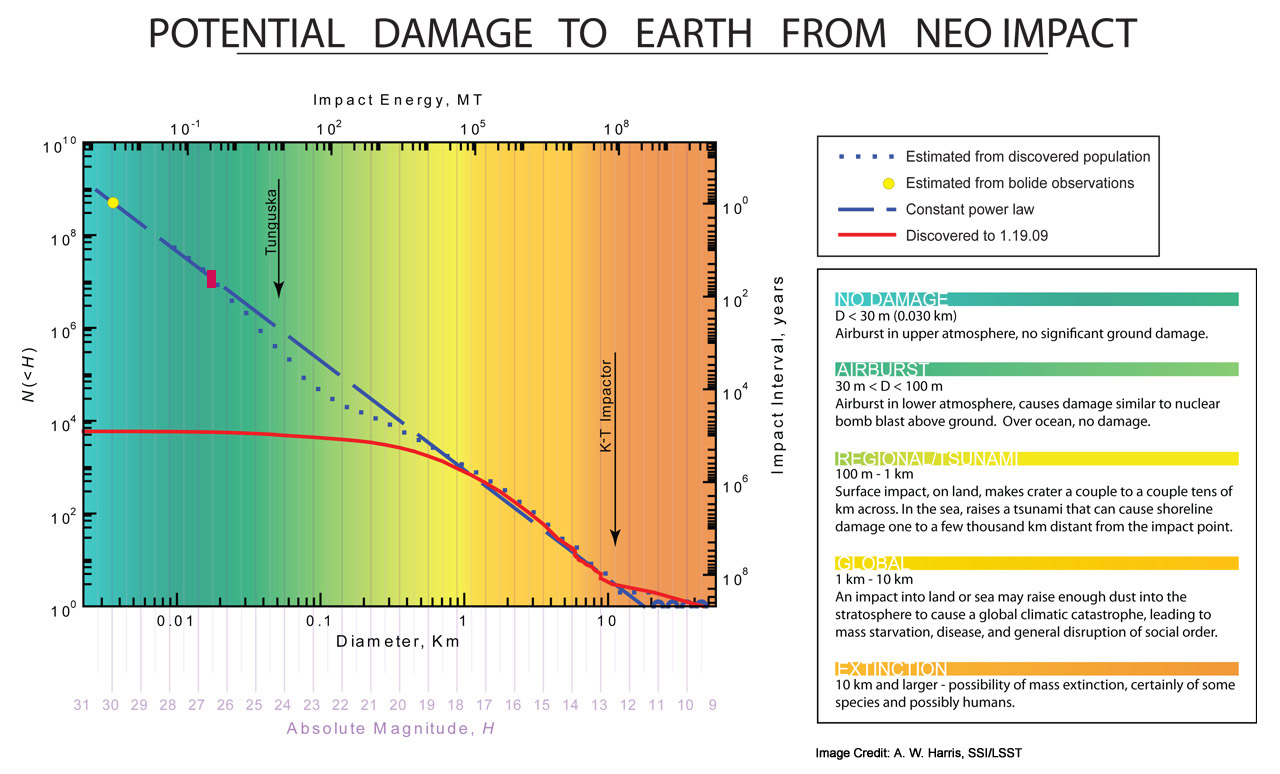 Potential damage to Earth from NEA impact. I added the Russian meteor on this graph (red square) with an energy of 300 kTons TNT eq, corresponding to a frequency of impact of 30 years. Adapted from LSST website. credit: A. Harris, SSI/LLST

The existing (Catalina Sky Survey, Pan STARRS) and future surveys (LSST) are dedicated to search for large impactors. These searches are motivated by the George E. Brown, Jr. Near-Earth Object Survey Act, which calls for NASA to detect 90 percent of NEOs with diameters of 140 meters or greater by 2020. As you can see on the graph above only ~10 percent of those asteroids have been discovered so far. For smaller ~15m asteroids equivalent to the #RussianMeteor, the survey is very incomplete since only 0.1 percent of those asteroids are known.

Should we spend our limited space money to build extremely large facilities to search for these small ~15m asteroids? I don’t think so, since we don’t have yet a complete understanding of the technologies needed to mitigate those events, and considering the current lack of financial resources, we should  be more imaginative than building larger aperture telescopes.

Our space budget could be better used on setting an alert systemsimilar to the existing ones for tsunamis, volcanoes, and in some countries earthquakes. They could help save life and avoid a disaster.What first comes to mind are current technologies over which we don’t have complete control such as nuclear power plants. A warning of a few minutes could be crucial to avoid major disaster in case of a impact with a >15m asteroid nearby a nuclear facility. The 2012 Fukishima nuclear power plant accident is a vivid example of catastrophic and worldwide ripple effects after a localized natural disaster. Without getting into those extreme cases, our society and its economy rely on  transportation (e.g. bridge, trains, commercial jets) that could  be affected by 15m-meteor impact, so an early warning system could save a lot of lives and reduce the number of injuries. 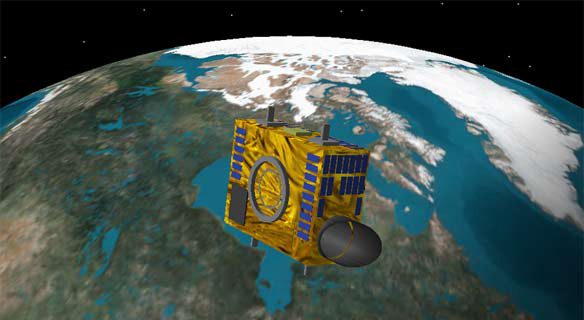 Spending a few hundred million of dollars to set up an alert network, an array of small telescopes around Earth(in space) should be a challenge we take up. We are aware of the danger coming from space, and should be wiling to mitigate it. The Canadian Agency is leading the effort on this topic with the development of NEOSSat, a micro-satellite dedicated to detecting and tracking asteroids and satellites, to be launched on February 25 2013.

Let’s also keep in mind that the cost of this alert system should be shared by most of the nations, since there is no borders from space.It was a bad day for Russia, and a clear reminder that space is not a friendly place.