Thoughts about a beautiful NASA video – Save Our Science

If you read this blog, I am certain that you are aware of the Venus Transit which occurred  from  22:09 UTC on 5 June 2012 to 04:49 UTC on 6 June (3:09pm to 8:49pm PDT). Because this astronomical event was visible from North America, Europe, and part of Africa & Asia, and it was streamed around the world from several observatories, it has been most likely one of the most observed and advertised astronomical phenomena, so I had to write a short personal post about it.

A planetary transit occurred when a planetary target (here Venus) is passing in front of another one (here the Sun). An observer located on the line of sight (here us on Earth) will be able to see an alteration on the surface of the background body, but also an attenuation of its brightness or a modification of its color. Astronomers use these transit observations to detect binary asteroids, binary stars, exoplanets in orbit around star.

Because Venus is not orbiting in the same plane than Earth is orbiting around the Sun (its orbit is slightly tilted), the Venus transits are rare and happen in average twice per century. The next one is predicted to happen in 105 years (December 10-11 2117) so it was most likely the last one that most of us, mortal earthlings, will be able to see.

In the morning of June 5, motivated by an unexpected clear weather, I suddenly decided to show the Venus transit to my friends & family by setting up my telescopes at Dolores Park, in the heart of San Francisco.

After unsuccessfully testing the projection method with my Galileoscope because it almost bursted into flames (lesson learned: plastic eyepiece and heat near a focal plane do not match well), I chose to use my MEADE ETX 90 telescope. Because you must never watch the sun with a telescope, nor stare it without special glasses, I had to find a solar filter in less than 3h, a challenging task even in San Francisco.

I mentioned this problem to my followers on Twitter and got various interesting responses, including one from @astrobio74 which suggested to buy a mylar film. I found out after visiting several construction stores, that the best places to buy mylar film are hydroponics stores. One later later, I was on my way in the MUNI tramway with the family, my portable telescope and 25′ roll of mylar film bought for $20.

At 3:10pm, we were late but we arrived at Dolores Park in San Francisco. After finding a spot providing a continuous view on the sun for the next 4 hours, I started setting up my telescope equipped with a piece of mylar film solidly taped on the aperture. I first tried to point to the sun without looking using the finder by projecting the sunlight on my hand (see below). 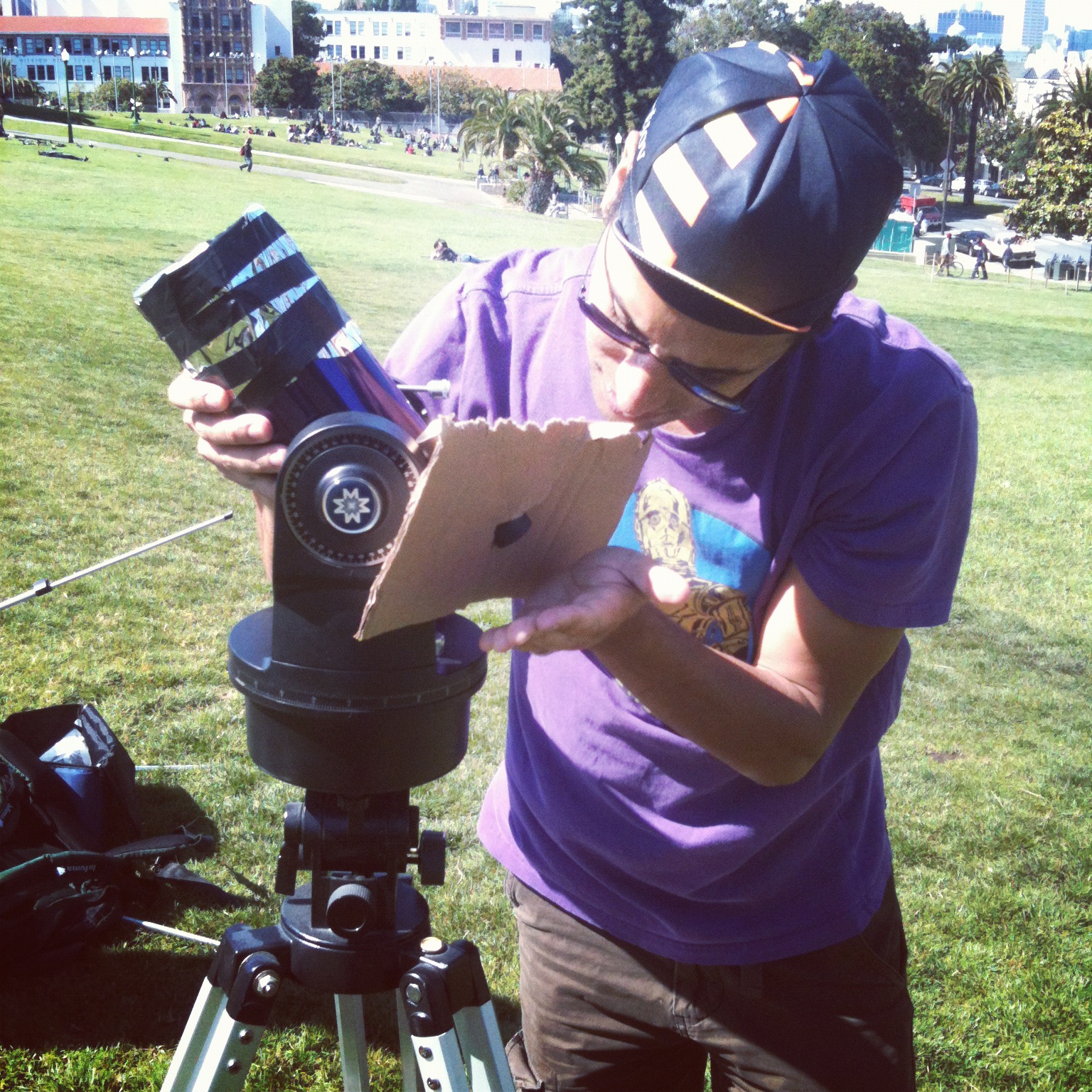 A few minutes later, I had an image of the Sun projected on my hand and I could even see Venus starting its transit (see below). Even if I am a professional astronomer, I am still thrilled to see with my own eyes an astronomical event. Observing with a 8-10m class telescope is a bit like watching a poor quality TV program since the images are collected using CCD camera and displayed directly on our computer screen. Moreover, we rarely have access to the telescopes which is sometimes located several km away from the control room. 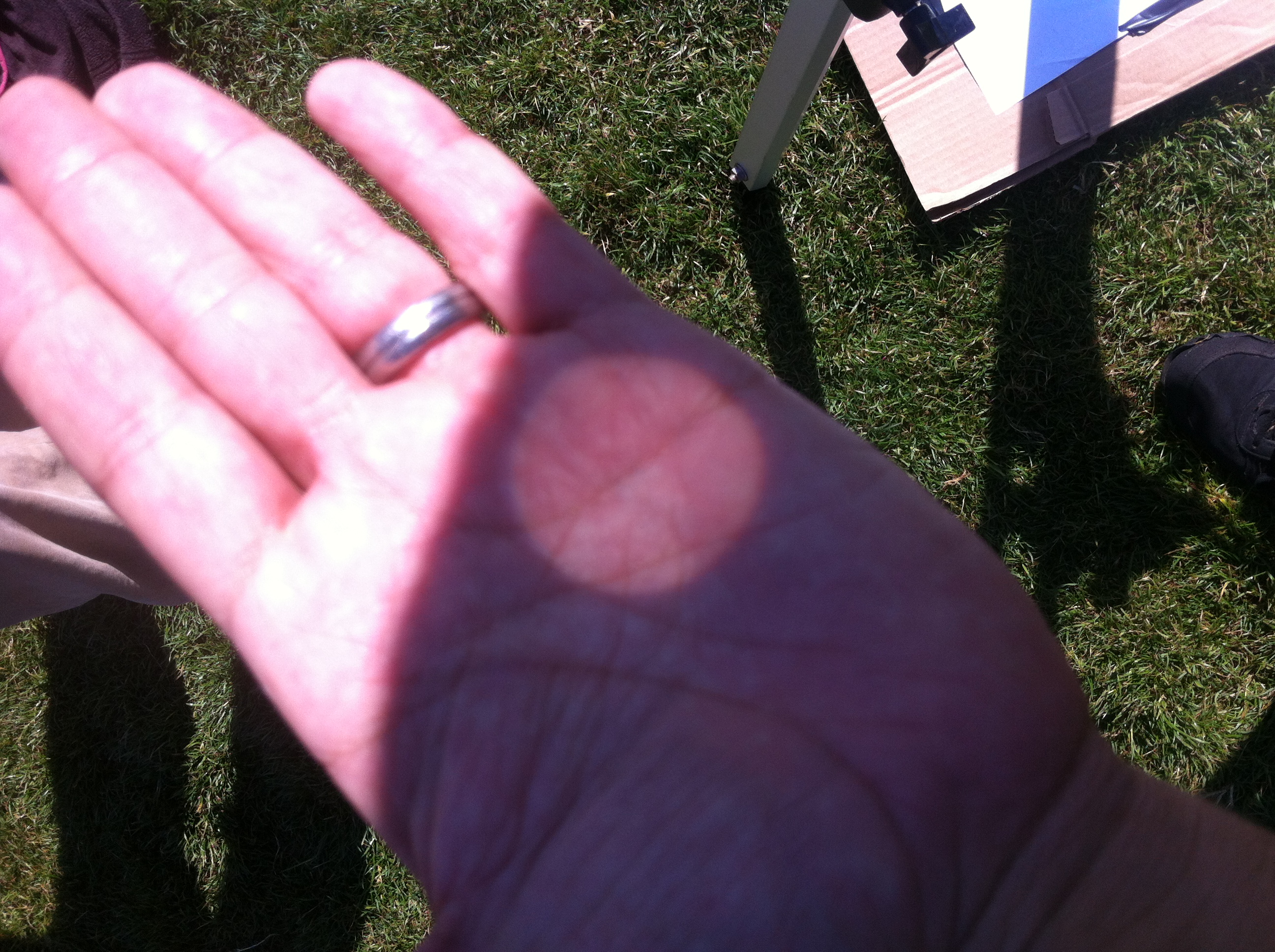 Projection of the Sun and Venus transit on my hand. The dark spot is located at 2 o'clock (Credit: F. Marchis)

While using a telescope in a public park, one can feel the pressure from peers and visitors, who are anxiously waiting for the astronomer to “do his job“. It is risky, but also more gratifying, even if in fact this is not really my job. After a few minutes fighting with the pointing of a telescope and reminding myself that I should definitely use more often, I finally managed to see the disk of the sun from the eyepiece of my telescope.

This is always a magical moment, where somehow I feel reconnected with the history of astronomy. When I saw the sunspots on the disk of our star (due to its activity), I thought about Galileo Galilei who observed them for the first time in 1607; an observation which challenged the dogmatic perfection of the heavens from the church. While observing the perfectly circular dark dot, moving slowly on the surface of the sun, I imagine the delight of Jeremiah Horrocks, when he saw the first transit of Venus between the clouds from home in 1639.

One of my visitors wanted to immortalize this moment and tried for several hours to take a picture of the transit with his smart phone, he sent me one of them where the shadow of Venus is clearly visible, just a proof that we did see the 2012 Venus transit. 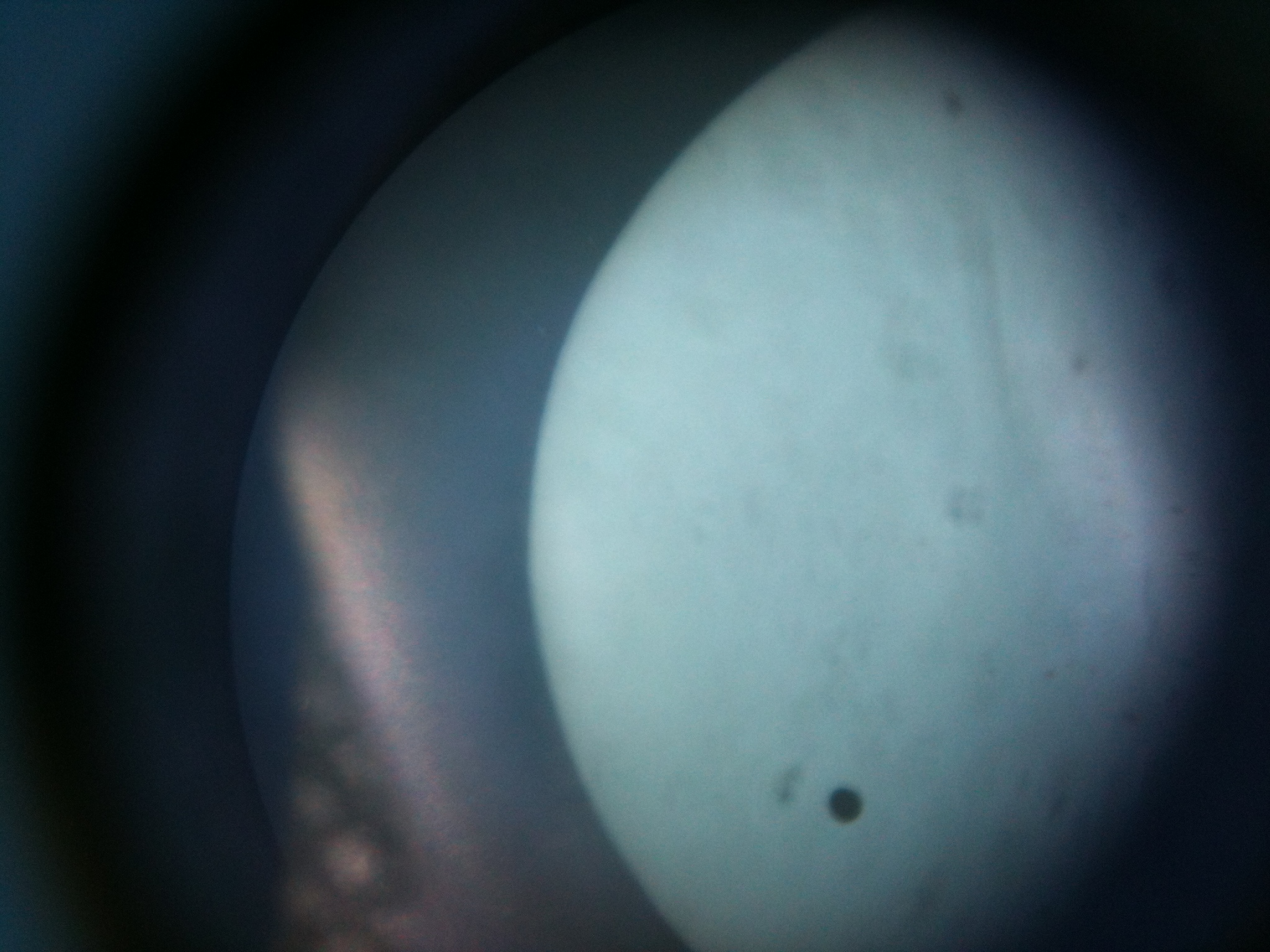 The shadow of Venus transiting the Sun seen from the eyepiece of my telescope and captured with an iPhone by R. Khavari

It was also refreshing and fascinating to talk to ~60 random visitors who stopped at our improvised station and asked to look through the telescope. They all left with a piece of mylar film that they could use to continue observing the transit while being in the park. Indeed, at ~4pm, when Venus was far enough from the limb of the sun, it was possible to see the transit without using a telescope, just with the naked eye. 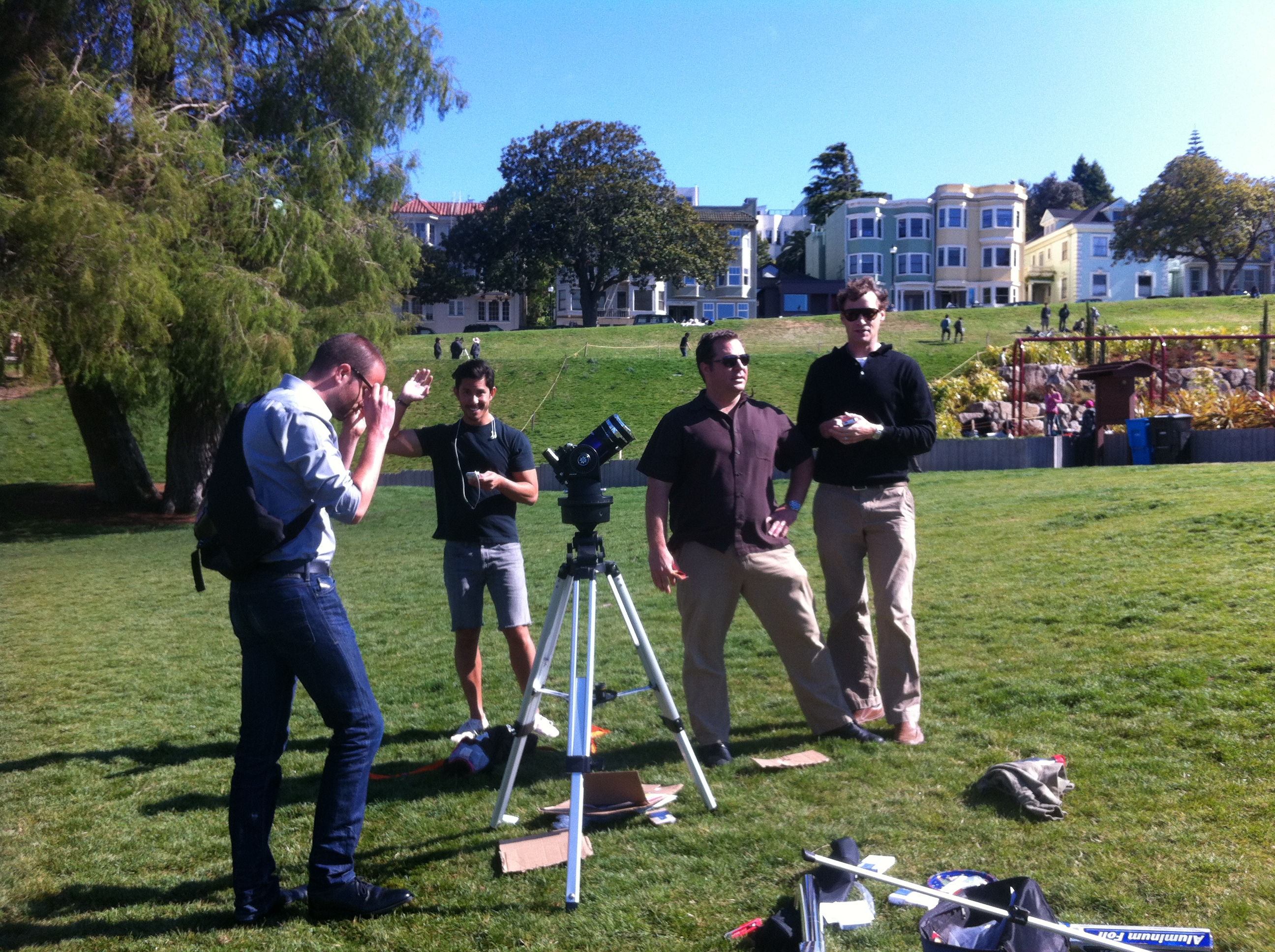 Interestingly most of the visitors had already heard about the transit and knew what it was about. Several of them were glad to see it since it will be most likely their last one. It is quite likely considering that the next transit will be in 105 years, but let’s be optimistic, Venus transits can be also seen from Mars and there will be several closer opportunities starting on August 19, 2030, and two years later on June 18, 2032.

Could we have humans on Mars that early? SpaceX, the recent private company which successfully berthed their Dragon capsule to the International Space Station,  hopes to put an astronaut on Mars within 10 to 20 years. We should make sure that we have a few astronomers in this first crew to Mars to observe the Venus transit. They might be streaming the event live for the Earthlings, and probably post pictures on their blog (or whatever will be used by then). 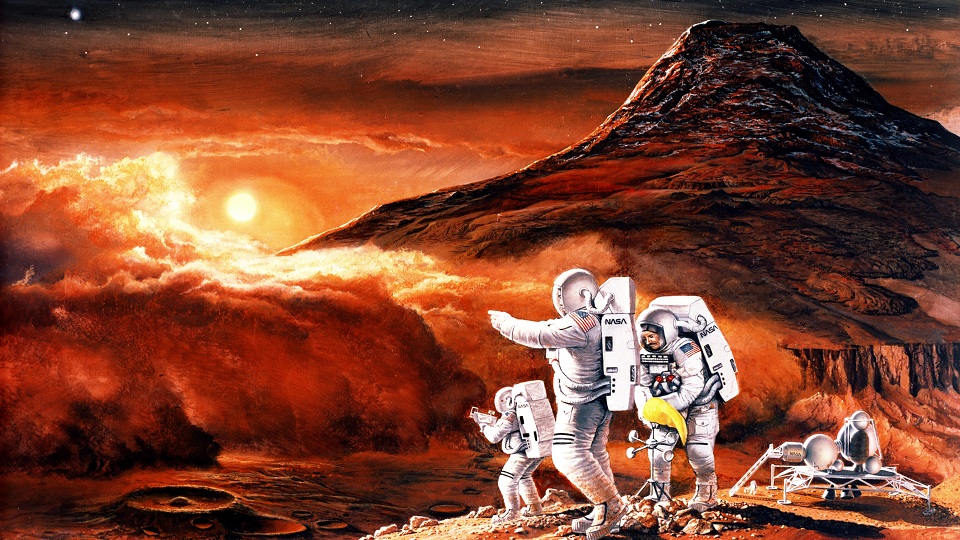 Astronaut-Astronomers getting ready to watch the Venus transit from the surface of Mars in 2030. Painting by Ren Wicks for NASA.

While waiting for this hypothetical trip to Mars, we can always re-watch  the streaming of the Venus transit. There are several of them, including an historical background discussion, on the VIMEO-EPSC account (Our Last Transit of Venus)  and also from the Solar Dynamics Observatory.