Kepler-16 is another great discovery coming from the Kepler telescope, the 10th NASA Discovery mission which is devoted to finding Earth-size exoplanets by monitoring variations of brightness due to transit. Today the Kepler team found a circumbinary exoplanet, an exoplanet orbiting a binary star system. Did they find Tatooine? 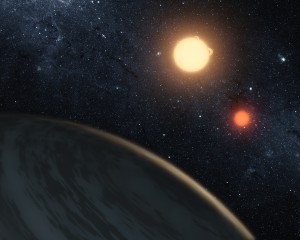 Artistic view of the Kepler-16(AB)b exoplanet (a Saturn-like exoplanet) in orbit around its 2 stars shown in the background.

In the large 105 deg2 field of view of the Kepler spacecraft, ~156,000 stars are being almost continuously observed by the 0.95m telescope. In 2010, the star number KIC 12644769 of the Kepler Input Catalog quickly got the attention of the Kepler team when they realized that it was an eclipsing binary star system, one of 1,879 detected after 44 days of operation. Binary stars, or pairs of stars orbiting around their center of mass, are common in our galaxy. It is now thought that 30% of stars are part of multiple systems. So the discovery of an eclipsing binary system is interesting but not such a big deal, until something else appeared around this late-K and M-dwarf star system. In a second catalog published in March 2011 and available on arXiv, the Kepler team gave a hint of their discovery. They mentioned the detection of a secondary event with a smaller intensity (<2%), suggesting that a sub-stellar object (aka an exoplanet) could be orbiting this binary system located 200 light-years from us.

Today an article published in Science reports the discovery of a Saturn-size (0.75 x RJupiter) planet orbiting this binary star system. A team led by Laurance Doyle, a researcher at the SETI Institute, shows that Kepler captured 3 revolutions of this exoplanet around the close-binary star system, meaning that 6 transits (3 per star) were recorded. After carefully inspecting the timing of these attenuations, they realized that the observed deviation of approximately 1 minute is due to the gravitational attraction of a third body less massive than Jupiter.

The masses, sizes and orbital elements of the binary star system (Kepler-16 A & B) and its exoplanet, named Kepler-16 (AB)-b (or b), were determined by developing a dynamical model able to fit the length and depth of the Kepler transit as well as additional radial-velocity observations recorded with the Tillinghast 1.5m telescope on Mt. Hopkins, Arizona. The two binary stars of the system, which are smaller and less massive than our Sun (0.69 & 0.20 x Msun for Kepler-16 A & B respectively), revolve around their center of mass at 0.22 AU. The binary system has a significantly eccentric orbit (e~0.16) with a period of 41.1 days. The exoplanet, Kepler-16 (AB)-b, has a circular orbit with a radius of 0.7 AU (the distance of Venus-Sun), also around the center of mass of the binary star system, in 229 days. Its mass (0.33 MJupiter), radius (0.75x RJupiter), and density (0.964 g/cc) are well constrained as well. 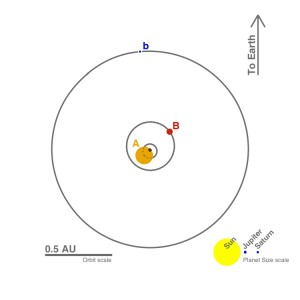 Top view diagram of the Kepler-16 system. The orbits of the Kepler-16 components are shown in gray curves. The sizes of the bodies are in current proportions to one another, but on a scale 20 times larger that the orbital scale. The exoplanet located at 0.7 AU described a circular orbit around the binary star system.

There is no equivalent in our solar system of such a large and dense exoplanet. Kepler-16b has the same size as Saturn but a higher density, suggesting that it could be made of a core of ice/rock (half its size) surrounded by an atmosphere in a configuration similar to Saturn in size but with a larger core. So this is not Tatooine, the mythical planet of the Star Wars movies, since it has no “surface” where Luke Skywalker or some carbon-based lifeform equivalent could trek. But you can imagine that the view from the exoplanet, or from one of its moons, would be striking since you would see a large orange star (Dang~1 deg so twice the apparent size of our Sun with a peak temperature at 0.65 um) and a smaller (Dang~ 20 arcmin, so smaller than our Sun) and fainter red star companion orbiting around each other in 41 days. Quite often, you would have two sunsets and two sunrises per day. Could it be any more romantic?

Without knowing much about the planet’s atmosphere, it is not possible to know its temperature, but the authors of the article estimated that it would be a cold world with a maximum temperature of ~200 K (-73° C, -100° F). This would not be very adequate for life forms as we know them in our solar system. But the real point of this discovery is that exoplanets around multiple systems, or circumbinary exoplanets, do exist. 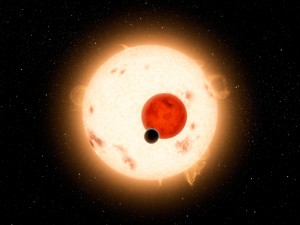 Artistic view of the components of the ternary system Kepler-16 in transit. The late-K star (large and orange) and M-dwarf star (reddish and smaller) and the exoplanet (dark) are shown to their relative size at the time of a transit. Sunspot activity as seen on Kepler-16A was indeed detected by Kepler.

It has been already suggested that CM Draconis, an eclipsing binary composed of two red dwarf stars, could have a large exoplanet, more massive than Jupiter, at 5 AU due to small timing variations in the eclipses. Anomalies in the orbital period of the eclipsing binary HW Vir were also explained by the presence of sub-stellar companions (19 and 8 x MJupiter) around the binary stars.

However, this new work has revealed, without a doubt, the existence of an exoplanet around a binary star system. Due to the unprecedented quality of the Kepler data, it has been possible to characterize both the stars and the exoplanet and determine their masses.

This is just a beginning. How this system, which is made of extremely coplanar objects, formed and evolved due to mutual perturbations will definitely get a lot of attention from observers and modelers alike. If you are an astronomer living in China or Russia, you should be able to photometrically observe one of the planetary transits on June 28, 2012. The Kepler team was indeed lucky to catch these planetary transits since the current orbital model predicts that they will cease to be visible from Earth in 2014 & 2018 for Kepler 16B and Kepler 16A respectively.

I discussed the results with my SETI Institute colleague Laurance Doyle, who was obviously excited by this discovery. On his office board, I could see a long list of KOI (Kepler Object of Interest) targets and some interesting diagrams showing different kind of multiple systems. He mentioned to me that Kepler has captured more of those circumbinary, or even circumternary, exoplanets. Kepler-16 gave them the opportunity to better understand the signal that they should expect from those systems, refining their search algorithm by looking for specific signatures such as a shift in the timing. So we should be ready for more of these planets around multiple stars, and they will force us to reinvent scenarios to explain the formation of planetary systems.

The authors finish the Science paper by mentioning that Kepler-16 “is a treasure for both exoplanetary and stellar astrophysical investigations”. I will add that it is also a challenge for our imagination and our research. This is a great time for astronomy, and students who are now thinking of joining us in this quest for life beyond Earth should realize how lucky they are to witness the post-Kepler astronomy era.