A Valentine night with Tempel-1 ?

NASA MESSENGER: Mercury has an orbiter (37 yrs after Venus)

Today is the night of Valentine day, I am not particularly romantic but I always tried to do something special for this day. Unfortunately, this year Valentine day is a disaster since I have several deadlines including an important paper which needs to be submitted before midnight.

At 10:50pm PST, my student (E. Enriquez) and I found out that Icarus Journal changed the rules of publication and we have to submit a final, high quality version, of each figure of this paper about the binary asteroid (90) Antiope. While my student is driving back to our office to make those missing figures, I am finalizing what I can while watching  the ustream live of Stardust-Next flyby of the comet Tempel-1.

The comet Tempel-1 is famous for being the target of the mission Deep Impact which was composed of a spacecraft equipped with cameras and spectrographs and an impactor sent deliberately on the comet on July 4 2005. The goal of this mission was to determine the interior composition of the comet but the result of the impact surprised us. Because of the amount of dust ejected after the impact, none of the instruments on board Deep Impact could photograph the crater. Tonight, NASA is recycling another mission called Stardust to flyby once again the comet nucleus and hopefully capture surface changes due to the impact.

11:00pm. The flyby was a success and mission control announced that the closest approach was performed at ~181 km from the nucleus at 8:39PST/04:39UTC (JPL PR). 72 images of the comet have been recorded. They are being downloaded using the Deep Space Network.

11:05pm Everybody at Mission Control/JPL is working on their computer, probably processing and analyzing the data as they are made available. 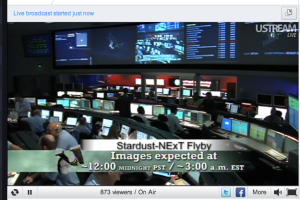 11:50pm PST: The Ustream link stopped… Well it gives me the opportunity to explain briefly that the main goal of the mission is to see the impact crater from Deep Impact, but there is no guarantee that the mission will capture the same side of the comet nucleus than Deep Impact. If not, we will get another hemisphere of the comet nucleus which could be interesting as well. So this is definitely a win-win scenario for NASA.

12:00am PST: There is an issue or delay with the data downlink due to rain in Spain. The NASA team is reconfiguring the antenna to improve the quality of the data transmission. We will probably get the first image at 12:45 am. Tim Larson, the project scientist of the mission Stardust-NeXt explained that the data are safe on the spacecraft, but the transmission on Earth is being corrupted due to the weather.

12:43am PST: I just submitted our revised paper to Icarus. Let’s hope it is the last time I have to deal with these figures. Back to Tempel-1! The data should be visible soon.

12:50am PST: from @nasajpl:” all images were centered in the field of view. That’s great news!” I just saw a glimpse of a nucleus of comet on one of the screen. Tempel-1 or an archive data?

12:53 am PST: I can see my colleague Alan Harris standing in the data process center, All scientists are all smiling so that must be a good news… 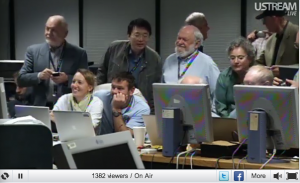 Scientists in the data processing center at JPL.

01:04 PST: Could someone explain to me why they are all wearing these blue polos?

01:06 am PST: My French colleague, O. Groussin from the Observatoire de Marseille is also at JPL data processing center. He is apparently captivated by something on this screen. 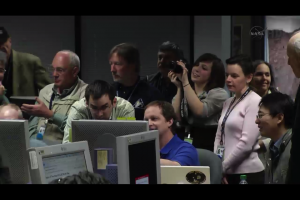 01:18 am PST: First images received by the spacecraft. The good news is that the comet nucleus is indeed at the center of the field of view. The picture below was taken at several thousand km, so we are not watching the best image taken at the closest approach (~180 km). 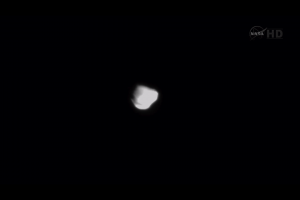 One of the first images collected by Stardust-Next of Tempel-1 Nucleus (credit: NASA)

01:20am PST: Chris Jones (JPL Associate director) mentioned that something went wrong in the way the data were saved and/or transferred to the DSN. The closest images will not be available for at least 6h.

01:43am PST: C. Jones announced that the press conference is postponed to 1pm on Tuesday Feb 15. The closest images should be received in the morning. They don’t know why the data were sent/saved this way yet.

To summarize the Valentine date between Tempel-1 comet and Stardust spacecraft  seems to have been successful, but the pictures are not yet available.

I guess it is time for me to have a break and I will simply wait for tomorrow to discover these closeup images.

Crater or not crater? That is the question… for tomorrow.