I am "SETI-less" but not for long.

Three weeks ago was the final week of  the SETI REU students. It was a busy time for all of us since they had to wrap-up their work, write their report, and give their final presentations.  Keaton Burns from UC Berkeley and Bill Freeman from LSU, who worked under my supervision in this program, did a fantastic work over this 10-week internship. 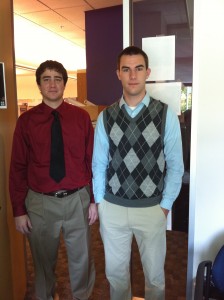 Since SETI Institute is a non-profit organization, it is not easy for the SETI researchers to find, attract and keep students to work with us. Because she quickly realized this issue, Cynthia Philips, a planetary geologist at SETI, decided to bring a Research Experience for Undergraduates (REU) program at the Institute. The REU intern program is run by the National Science Foundation (NSF) which funds colleges, universities, observatories, and other research institutes around the U.S. to host undergraduate students. NSF is very concerned with making sure the U.S. has enough bright people heading into graduate careers in science disciplines such as biology, chemistry, astronomy, physics, and so on. they noticed that an early involvement of students in research is key to form the future generation of young, smart and motivated researchers. The REU program in astrobiology of the SETI Institute began in the summer of 2006 and about 80 students have now successfully completed the internship program. This is the  first and remain the only REU program to have an interdisciplinary astrobiology focus (see for instance the list of programs for 2010 here)

As I already mentioned in one of my previous posts (Undergraduate Students, our research needs you!), students from all levels are playing an important role in my research. I generally hired students to work with me on a challenging project, something I don’t know much about yet. It is important for my research and my professional growth to keep tracks of the new tools, such as softwares, numerical techniques and new programming languages. A young student will benefit as well from working on this kind of projects since s/he will learn something that he may use all her/his life. Consequently I often offer projects which will give the opportunity to my students to explore and use these unknown tools while learning about the physical processes and outstanding issues in my research. This is hopefully a win-win scenario.

For this REU 2010 year, in collaboration with Julie Bellerose, I hired Keaton Burns, sophomore undergraduate student at UC Berkeley, to develop a dynamical model of multiple asteroid systems. Keaton worked from scratch on a new model coded in Python 2.6 using numpy and scipy libraries. The goal of his work is to determine stable orbits for spacecraft exploration around multiple asteroid systems. After 10-week of intensive programming in Object-Oriented, he found several interesting orbits stable on more than 20 days around the doublet asteroid (90) Antiope and each moonlet of the triple asteroid (45) Eugenia. Keaton recently applied to the Undergraduate Research Apprentice Program (URAP) to continue this work using one of the computing clusters at UC Berkeley. We are planning to do this analysis for all multiple asteroids which could potentially be visited by a spacecraft. We are planning to present this work at the LPSC conference in March 2010. You can click on the following video to see the unstable orbit of a spacecraft located in the L5 Lagrange point of (90) Antiope.

Unstable orbit of a spacecraft located in the L5 Lagrange point of (90) Antiope doublet binary asteroid from Franck Marchis on Vimeo.

Bill Freeman, Junior undergraduate student from Louisiana State University at Baton Rouge, worked with Janice Bishop and myself on the origin of 2008TC3, an asteroid detected a few days before it impacted Earth and for which fragments were collected in Sudan in 2008-2009. His internship was quite multi-disciplinary since he prepared in a lab mixture of minerals to reproduce the observed spectra of Almahata Sitta meteorites and also processed and analyzed several spectra of main-belt asteroids collected in visible with the spectrographs available on the Lick-3m and Calar Alto-2m, and in near-infrared on the IRTF NASA telescope. The goal of this internship was to help determining the origin of 2008TC3 which may be a fragment of a large dark carbon-rich ureilites disrupted asteroid. 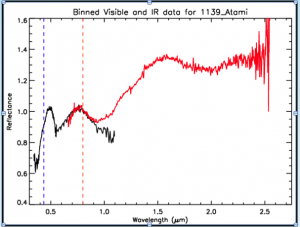 I should also mention that my students were involved in other projects. Keaton observed at Keck Observatory end of June and we collected some very interesting observations of Multiple Asteroids and Io volcanic activity. They used the Allen Array Telescope located at Lassen Park and explore this extraordinary national park with our exobiologist Rocco Mancelli. 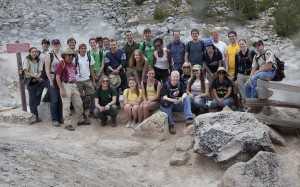 Ninetee students of the SETI Institute REU program and several mentors at a field trip in Lassen Park.

Finally, several of the 19 students who enrolled in the REU program found time in their busy schedule to create a video called “SETI Gurls” that I am attaching below. It is obvious watching this video that these REU students were particularly creative and fun to work with.

Wishing you the best with your future, Guys and Gurls!