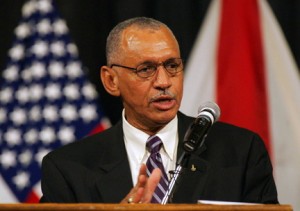 NASA Administrator Charles Bolden speaking about the future of NASA. (The Huntsville Times)

First of all, it is obvious that the new budget is extremely “science-oriented”. Despite the economic turmoil, the budget of most research federal agencies increased significantly. Priorities are given to education and to the science and exploration programs.

For instance, part of the 8% increase for the National Science Foundation (NSF) in FY 2011 will help promoting science and technology to attract and retain young researchers (Graduate Research Fellowship Program, Faculty Early Career Development, Advanced Technological Education). This is an important effort led by the NSF which is vital to keep the leadership in science and technology. Additional funding will be also directed to support major research equipment and facilities dedicated to astronomy. The Advanced Laser-Interferometer Gravity-wave Observatory, the Advanced Technology Solar Telescope, and the Atacama Large Millimeter Array, three ground-based facilities, are included.

The science program is divided into three categories whose funding and priorities changed for the FY2011 and the next 5 years:

– The Earth science study budget will increase to allow the building of a second Orbiting  Carbon Observatory (the previous mission failed after the Taurus rocket nose cone fairing did not separate), developed news satellites to monitor the climate. The goal is to have 15 earth spacecrafts in orbit, finalizing all the missions in development.

– The Planetary science program budget also increases by 11% to allow the restart the production of Plutonium 238. This is indeed important since the Pu238 cannot be found in nature and needs to be produced in dedicated reactors. The US supply in Pu238 was dropping and this radioactive material is essential to power spacecrafts in the outer part of the solar system (from Jupiter and beyond). Voyager, Cassini and New Horizons spacecrafts use this source of energy for instance. The planetary science budget also provides funding for 11 missions, including the completion of the Mars Science Laboratory (MSL), the missions described in roadmap called Mars 2016 (such as MAVEN) and JUNO (A New Frontier mission to explore Jupiter interior and magnetosphere), GRAIL (a Discovery NASA mission to measure the Moon gravity field in unprecedented detail). It also approves the CASSINI extended Solstice Mission (a flagship NASA/ESA mission), and the concept development for the Europa Jupiter System Mission, a joint international mission ESA/NASA to explore Europa.

– The astrophysics program budget decreased of 3%. However, this budget increases continously from 2012 to 2015 to support 15 missions including the James Webb Space Telescope with a a large, infrared-optimized space telescope, scheduled for launch in 2014.

NASA Space Operations budget decreased by 20% (total $4.9 billion) and includes $990 million for the Space Shuttle Program, and $2.8 billion for the International Space Station (ISS) (increased by 20%). The ISS life-time  and use is therefore confirmed. However, this budget will not support the development of the Constellation Program anymore. This program designed by the previous administration was made of ambitious tasks aiming at building following vehicles:the Ares I launch vehicle, capable of launching astronauts to low-Earth orbit; the Ares V heavy-lift launch vehicle, to send astronauts and equipment to the Moon; the Orion capsule, intended to carry astronauts to low-Earth orbit and beyond; and the Altair lunar lander and lunar surface systems astronauts will need to explore the lunar surface (from the Augustine report). The Augustine Committee appointed by the Obama administration in 2009 reported “that the Constellation program is challenged by a broad spectrum of problems and fundamentally ‘unexecutable.’”. The new administration decided to cancel this program and instead focus on heavy-lift rocket systems, technologies for closed-loop life support systems, advanced in-space propulsion systems, and “a steady stream of precursor robotic exploration missions to scout locations and demonstrate technologies to increase the safety and capability of future human missions and provide scientific dividends.”

Access to low-Earth orbit, such as to the ISS, will be provided by private companies. I mentioned last year the recent success of Space Exploration (SpaceX), a private company which is developing a family of fully reusable launch vehicles (called the Falcon). The idea is to buy “tickets” from these commercial companies to send material and people on the ISS and in low-orbit. These companies will have to show that their technology is reliable and safe. This is a major shift in the policy of NASA which always had the monopoly in launching rockets in the US. It should be mentioned that the rocket-business is partially privatized in Europe, since Arianespace, the company has 23 shareholders from 10 European countries (including the French space agency CNES with 34%, EADS Astrium with 30% and all European companies participating in the production of Ariane 5 launchers). NASA is going one step ahead with stopping all investments in low-orbit vehicles to focus on heavy-lift rockets (to explore asteroids and terrestrial planets) and more challenging problems. This is risky since we don’t have yet a proof of feasibility from SpaceX or any other space private companies, but SpaceX succeeded in launching its Falcon 1 on Sept 2008.

It is obvious that I fully support the increase of funding for NSF and NASA, especially the emphasis in attracting and retaining young talents in science. The future of our society will be technological, and the need for people who have a good understanding of science is necessary to develop these technologies. We are facing several challenges such as the need for a clean and reliable source of energy, the understanding of the climate change, and the need for new resources. The continuous exploration of our solar system, including our planet, is key to face these challenges. Exploration leads to discovery, thus science, so it is important that the NASA budget includes as well a robust funding for space missions and scientific studies. The fact that the production of Plutonium-238 will be reinitiated confirms that we will continue to explore our solar system, including the outer planets. The cancelation of the Constellation program has been criticized but appeared inevitable last year, shortly after the publication of the Augustine report. The report pointed out that the program was significantly delayed by at least 3 years. Ares-1 first stage made its first flight-test in October 2009 and will not reach his goal of replacing the Space Shuttle in 2016 as initially planned. The committee pointed out that a significant increase of its budget should be allocated over the next 5 years (an increase of $3 billion per year w.r.t FY 2010) to reach this goal. Considering the state of the US economy, this increase would not have been possible without cancelling other primordial NASA projects. The decision of having commercial companies leading access to low-Earth orbitis interesting. If these companies are successful, it could save a significant amount of money to NASA and lower the lifecycle costs. This new competition with appropriate incentive (see for instance the success of the X-prize foundation competition) could bring new spirit in the space exploration, including more competition. It will also help NASA focusing on more challenging tasks like the exploration beyond the low-Earth orbit.

If I had to find something negative to the budget and the priorities, I should say that I regret that the NSF budget does not include any committed financial support for the development of extremely large ground-based telescopes, such as the TMT and that NASA does not have a firm commitment for making the Europa Jupiter System Mission a reality.  this is definitely minor comments considering that we were all anxious to know where the Obama administration stands in term space exploration. Most of the astronomers are not disappointed by this budget and priorities.

Sorry for this very long post and the delay to write it (I promised it one week ago!). Hopefully you will find it informative. I will most likely describe some of the futur missions in my future posts. 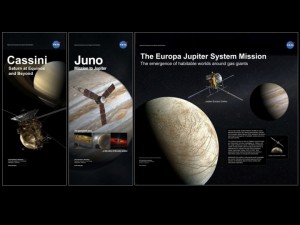