Some news of the planet Mercury from the AGU Fall conference

How will be Earth if it has rings? tomorrow at the NASA-GRC!

Fifteen days ago, I wrote a short post on this blog to let you know that I was flying to Cleveland, OH to meet colleagues interesting in space mission design. Without realizing it, this project has been taking over all my time and my energy (including nights of work and thinking) and produced a roller-coaster of excellent and bad news. Because it is still uncertain what exactly it is going to happen I will not mention it today, but I will keep you posted as soon I see the light at the end of the tunnel. 🙂 Today I will focus my post on a very positive note which is the session Mercury and the Messenger mission that I attended at the AGU Fall conference. 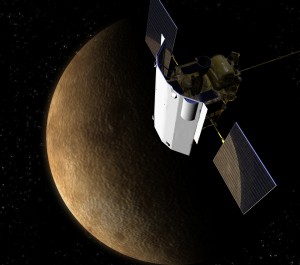 Artist drawing of the spacecraft Messenger in orbit around Mercury (credit: NASA-JHU)

The American Geophyscial Union (AGU) Fall Conference is organized every year in December in San Francisco, CA in the Moscone Center, a gigantic conference center located 30 min from my house in BART. It is a delight for me to be able to attend this well-known conference without having to deal with airports, hotel and all the headache linked with traveling around the world. The AGU is mainly focused on geophysics but because planetary science is a field between astronomy and geophysics, a small part of the conference is dedicated to the study of planets and their geology.

On Monday morning, my student, Abigail Reiss, had a poster about her work on the spectroscopy in visible of binary asteroid systems from Lick Shane telescope. Friday morning at the end of this week, I will discuss in a session entitled “Recent Results in Planetary Science and Their Impact on Future Science and Mission Priorities” a mission concept for a Grand Tour of Multiple Asteroid Systems, but today I propose to discuss the extremely interesting  session about Mercury and the Messenger mission.

Messenger is a NASA Discovery class mission launched in Aug 2004 and managed by the Johns Hopkins University. The goal of this mission is to understand why the fourth terrestrial planet, the closest to the Sun, is so different to its sisters (Venus, Mars, and Earth). Mercury is a difficult planet to observe from the ground because of its proximity to the sun, a spacecraft provides direct insights about the planet not attainable even with the largest telescopes. The scientific objectives of the Messenger mission are diverse, they proposes to find out the source of its high density (5.4 g/cc), to study the geological history of the planet, to find the source of its magnetosphere, to determine the origin of the material at its pole and finally to measure the source of volatile elements detected around the planet (in its exosphere). This is definitely an ambitious program and after a fantastic journey around the terrestrial planets of our inner solar system (1 Earth flyby in 2005, 2 Venus flyby-s in 2006 and 2007, 3 Mercury fly-by in 2008 and 2009) the spacecraft is planned to enter in Mercury orbit on March 18 2011.

A spacecraft does not need to be in orbit around a planet to record interesting observations, if the flyby is controlled and performed at low velocity, its  instrument can be used to map the surface by imaging, record spectra, measure the composition of the planet remotely using Gamma Ray or Neutron spectrometers, and study its magnetosphere. Because the spacecraft needed to perform 3 flyby-s with Mercury to be in an appropriate orbit to be captured by Mercury, the planetary scientists could already start studying the planet and its mysteries.

First of all, and that’s the most obvious result, combining three flybys taken with slightly different orientation the spacecraft allows planetary scientists to map the almost entirely the surface of Mercury. The planet was flyby-ed three times between 1974 and 1975 by a US spacecraft called Mariner 10. This mission gives the opportunity to determine without ambiguity the 3:2 spin-orbit resonance of Mercury (2 revolutions around the sun = 3 spin of the planet) and map 45 % of the planet. Interestingly the Messenger flyby was made at ~200 km from the surface provided a resolution better than 500 m. The almost global mosaic of Mercury was presented by K. Becker, a cartographer and programmer at the USGS Astrogeology Research Center at the conference in the poster session and shown several times during the talk. 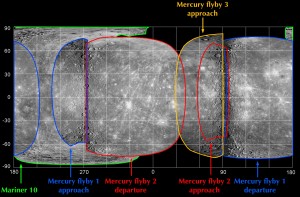 You can view it using an interactive interface on the website called map-a-planet.org and see the details about the map on the USGS Press-release. As shown in the JHU web site, the third flyby was extremely useful to complete the map even if the spacecraft entered in a safe-hold mode at the closest approach and departure phase. The map reveals a surface composed a smooth terrain, and heavily craterized ones like on the Moon. However, one can see the absence of Maria on Mercury. This global map will be useful once the spacecraft is in orbit around the planet as a reference and also to plan future operations.

The oral talks that followed the poster session on Tuesday afternoon, give us the opportunity to get a review of our current knowledge about Mercury and what we should expect once the spacecraft is in orbit. I cannot summarize in this blog 6 oral talks but I would like to emphasize a few important points.

Recent volcanism on Mercury? High resolution images and LIDAR/RADAR measurements of Mercury surface reveals the presence of smooth plains, differences in color with depth, and pyroclastic bright deposit that could indicate the existence of intensive, stratified and young volcanic activity on Mercury surface. A young and intensive volcanism is needed to explain the absence of volatile elements in the interior of the planet and hence the high density of the planet.

Space weathering on Mercury? Without any atmosphere the surface of a planet or an asteroid is directly in contact with the solar wind and the micrometeorite bombardment. These processes alters the surface and modifies its color. We don’t really understand how space-weathering works yet, but in the case of Mercury surface we have a unique laboratory where the micrometeorite bombardment should be predominant. We see a clear effect of space weathering on the surface of the planet which is different than on the moon.

Iron content on Mercury surface? Mercury has a lower reflectance (it is darker) and is significantly less contrasted than the Moon. Even fresh material seems to be darker than on the moon, so space weathering by deposition of  large grains of iron cannot explain this difference as it was preliminary thought. Holsclaw et al. showed that the presence of opaque materials such as Ilmenite (FeTiO3) or Ulvospinel (Fe2TiO4) could explain the low reflectance and  low reddening which has been observed in the Messenger spectra of fresh material. This significant abundance of Iron (22% wt, see Lawrence et al) is also confirmed by Neutron spectro-analysis, another instrument on board Messenger.

To summarize, with three flyby-s including one partially successful the team already collected interesting data which shines lights on key science objectives of the mission. When Messenger will be in its polar eccentric orbit around the planet, we will have 730 more flyby to go! so hopefully more answers than questions. It is a bright time for Mercury specialists, and it is not going to stop since the ESA spacecraft BepiColombo will set off in 2014 on a journey lasting approximately 6 years with an arrival planned on mid 2020. 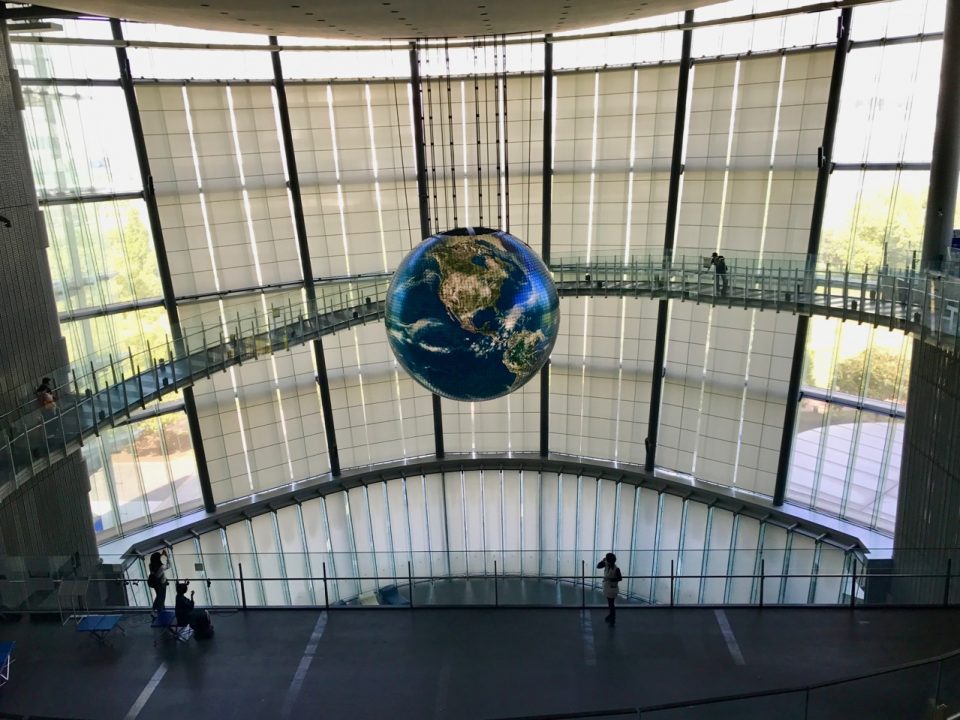