An update about the LCROSS mission

Q&A about the soft money position

Last June, I mentioned the LCROSS mission which was aimed at impacting the surface of the Moon. 113 days after its journey, this event indeed happened on October 9 2009. At 04:31 UT the Centaur upper stage rocket  hit the surface, followed by LCROSS itself at 04:39 UT.  It was recorded by several telescopes located at Hawaii and in the US (where it was visible) and by another NASA spacecraft called Lunar Reconnaissance Orbiter (LRO) in orbit around the moon.

The Lunar CRater Observation and Sensing Satellite (LCROSS) was a mission specifically designed for active sensing through impact. The scientists hoped to reveal the presence of water in the area of the moon in permanent shadow.

The first impact was captured by the LRO which flew by  impact site 90 seconds after impact at a distance of ~80 km and detected it using its infrared instrument (calleddiviner).

Unfortunately for the public, the flash of the impact was not reported as detected in visible  on the NASA TV as you can see on the video attached below. You will see the last second of the LCROSS mission just before the shepherding spacecraft hit the surface.

It is too early to reach conclusion yet. My colleagues mentioned to me that it was unexpected not to see a bright impact in visible light, this is most likely due to the fact the the impact happened behind a small mountain and/or the plume of debris did not reach the sunlit area above the surface due to the composition of the surface and the angle of the impactor. Preliminary analysis indicates that no water was detected suggesting that the impact happened in a dry area of the moon. So we expected a firework and it did not really happen. Did the mission fail as it was suggested in numerous web sites and blogs? It is definitely too early to say.

If you are interested in knowing a bit more about the 80 million dollar mission and the wealth of data that were collected, you should watch the panel discussion organized shortly after the impact at SETI Institute. Tony Colaprete, the young PI of the mission showed (54 min in the movie) that the centaur impact site (a 38 m crater) is detected by LCROSS in visible and near-infrared images shortly before it also impacted the surface.

Jennifer Heldmann, a co-I of the mission, showed later (see 57 min and after) that the LCROSS shepherding spacecraft detected the event UV, Visible, NIR and mid-IR instruments. It was too faint that expected but it did happen. 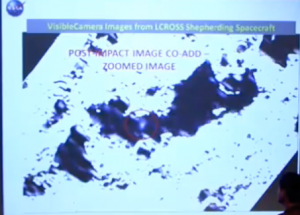 The plume of the Centaur impact (red circle) detected by the LCROSS shepherding spacecraft in visible.

The data are being processed and analyzed, so we should have some news about it. Tony Colaprete mentioned that they have a meeting in Nov 17 at NASA Ames to finalize their analysis and the results will be present at the AGU Fall meeting in San Francisco, CA. I will be there and I will keep you posted as usual. 🙂

By the way if you want this blog to remain alive after the end of the IYA2009, you should start writing to the bloggers’ comments to let them know. A few of us are willing to continue this initiative  but we need your support and also some proof of interest. 🙂