Stellar Occultations of Minerva and its satellites – prediction of the paths

Undergraduate students, our research needs you!

I mentioned in my previous post that (93) Minerva will occult several stars in October and November. These observations could be interesting because they will give us the opportunity to estimate directly the size and shape of the primary (hence its density) and, if detected, of the satellites as well.

I am happy to announce that thanks to the collaborative effort from several groups of observers who had telescopes time at Keck observatory led by J. Melbourne, California  Institute of California,  A. N. Stockton, University of Hawaii,  C. D.  Fassnacht, University of California at Davis, and T. J. Dupuy, University of Hawaii, and my colleagues, P. Descamps, J. Berthier, and F. Colas, Institut de Mecanique Celeste et de Calcul des Ephemerides at the Observatoire de Paris, we managed to determine the orbital parameters of the satellites of (93) Minerva. We can therefore predict their positions at the time of the occultations and determine the path of the secondary occultations.

Two stellar occultations are particularly interesting because they involve  a bright star and are located in a relatively densely populated area (maximizing the chance of finding courageous observers). The first one is scheduled tomorrow (!!) on October 21 at 21:40 UT (V=12.8 star, visible from the northern part of Europe Ireland, UK, Scandinavian and Baltic countries and Russia). The second one is scheduled on on Oct 25 at 05:20 UT (V=14.0 star, visible from South America at the border between Brazil and Venezuela and Colombia). A complete description of these events can be found on Jerome Berthier occultation web page. I am attaching the maps of the stellar occultation events below. The red path corresponds to the occultation by the primary (which will last 10-15 s), the green and cyan lines are the paths of the secondary events which is estimated to be a blink of 1-2s.

Information about how to observe these events can be found on the IOTA web site.

Clear skies wherever you are!

[Update on Oct 21]: Our CBET announcement was released during the night

OCCULTATIONS OF THE (93) MINERVA SYSTEM
F. Marchis, Carl Sagan Center at the SETI Institute and University of
California at Berkeley; and P. Descamps, J. Berthier, and F. Colas, Institut
de Mecanique Celeste et de Calcul des Ephemerides, Observatoire de Paris,
report on analysis of images of (93) Minerva, a recently discovered triple-
minor-planet system (see IAUC 9069), that were collected with the 10-m Keck
II telescope, its adaptive-optics system, and its near-infrared camera (NIRC2).
Astrometric positions of the two satellites collected by several groups led by
Marchis on Aug. 16.068 UT (IAUC 9069), by J. Melbourne (California Institute of
California) on Sept. 6.146, by A. N. Stockton (University of Hawaii) on Sept.
12.132, by C. D. Fassnacht (University of California at Davis) on Sept. 15.133,
and by T. J. Dupuy (University of Hawaii) on Sept 28.065, allow estimation of
the parameters of the mutual orbits of the satellites.  They predicted the
positions of the primary and the satellites for stellar occultations predicted
on Oct. 21.905 (star of V = 12.8; event visible from the northern part of
Europe), on Oct. 22.569 (V = 16.1; visible from Australia), and on Oct. 25.219
(V = 14.0; visible from South America).  These observations could help to
refine the size and shape of the components of the system and are strongly
encouraged.  Details about the stellar occultations (maps, timing, and
duration) are available at website URL http://www.imcce.fr/page.php?nav=en/
ephemerides/phenomenes/occult/stellarocc.php?query=predoc. 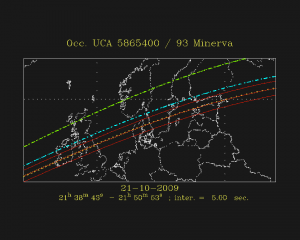 Close-up on the path of the occultation scheduled on Oct 21 at 21:40 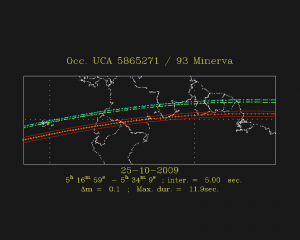 Close-up on the path of the occultation scheduled on October 25 at 05:20 UT