217P/LINEAR is breaking up or giving birth?

The discovery of a new triple asteroid – (93) Minerva

Hello from Hawaii,
I am in vacation so this post will be brief. David Cardenosa from the Bootes Obs, Boecillo, Valladolid in Spain (observatory code J05) reported on the MPML list an unusual observation of the comet 217P/Linear, I thought some of you may be interested in observing this target. 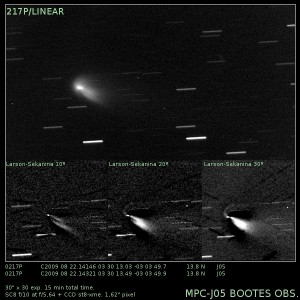 The observation of 217P/LINEAR  is shown on the left. David Cardenosa noticed a new large jet toward the astronomical west and a change in the shape of the tail. After processing it using sharp edge filtering (below), one can see that the large jet is coming from a second feature like if the comet gave birth to a second one. 🙂

Subsequent observations taken by E. Guido & G. Sostero confirmed the unusual aspect of 217P/LINEAR. Theu mentioned that “A spiralling arclet about 1.5 arcmin long is emanating from the central condensation in clockwise direction.Arclet are temporary phenomena in the cometary coma that are related with fragmentation events of the nucleus” and confirmed  the presence of two tails slightly shifted by ~10 deg (see image here).

It is very probable that 217P/LINEAR is breaking up. Follow up observations from all type of telescopes will be useful, spectroscopy as well since it mayhelp to detect fresh material from the interior of the comet. The coordinates (DEC = -02,RA=2h) of the comet can be find in the MPEC ephemeris. Its expected magnitude is ~12 in visible but it should be significantly brighter (V=10-11) because of the breakup.

Let me know if you could observe it. This is also a nice target to show students the variability of the cometary activity. I kind of remember that the schools are starting soon so why not choosing it as a lab target?