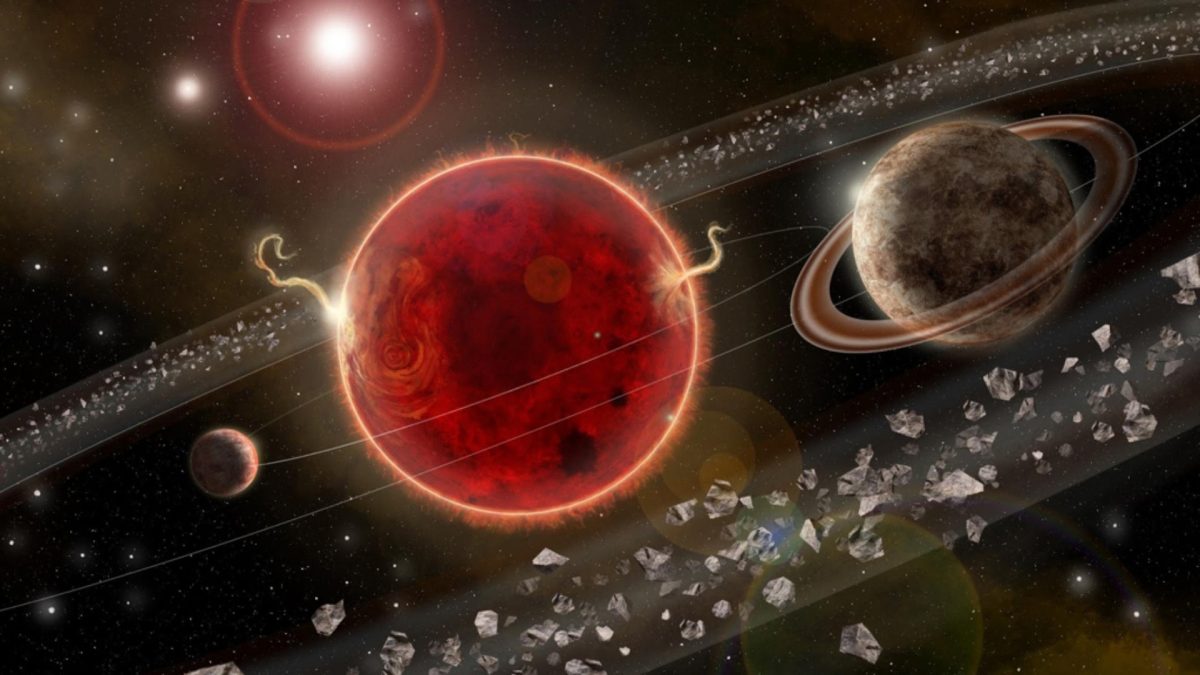 You’ve probably heard about the story, published in The Guardian, a respectable newspaper in the UK, about the potential discovery of an alien signal from the Proxima Centauri system, the star closest to us. 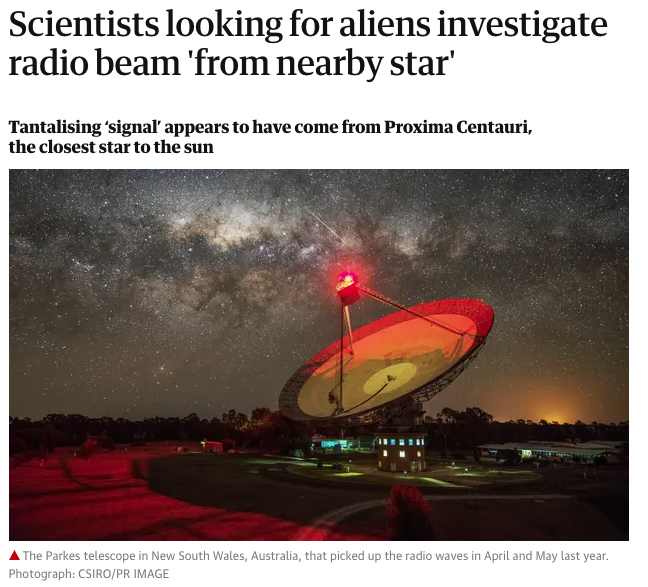 This article, and a companion piece in Scientific American, noted that in April and May 2019, the Parkes telescope in Australia was listening to Proxima b, a red dwarf. This star is known to be active, and this listening was part of a stellar-flare survey.

Shane Smith, a student at Breakthrough Listen, a program privately funded by Yuri Milner to search and find so-called technosignatures, or signals that indicate the existence of a civilization like ours, checked out the data. He found an exceedingly curious narrowband emission, needle-sharp at 982.002 megahertz.

The team inspected the data, confirmed its veracity, and named it BLC1, for “Breakthrough Listen Candidate 1.”

The name clearly identifies what it is. It’s a candidate, not a confirmed signal. Everyone at Breakthrough Listen emphasized this, including executive director Pete Worden.

Because of its profile, it’s very unlikely that the signal was produced by a natural but unknown cosmic source, but who knows…Nature often surprises us.

One simple explanation is that Parkes picked up a signal that originated on Earth. We use radio to communicate, and this could be terrestrial interference. And that’s probably the most likely explanation.

But let’s take a closer look at the source. Astronomers have been paying a lot of attention to Proxima Centauri for years. It’s the closest planetary system to Earth we know of. In 2016, a team of astronomers led by Guillem Anglada‐Escudé announced the discovery of Proxima b, a planet 20% larger than Earth orbiting its star every eleven days.

What really matters to astronomers is that this planet is located in the habitable zone of its star, where liquid water could exist on the surface. But it’s crucial to remember that we have not yet taken a picture of this exoplanet. We know of its existence only through the motion on its star, so all we have is an estimate of its mass and its orbit, nothing else.

In 2019, astronomers discovered another planet buried in the same data and named it Proxima c. This planet is seven times more massive than Earth, and could be a super-Earth or a mini-Neptune. We think that this world is too far from its star to be habitable. 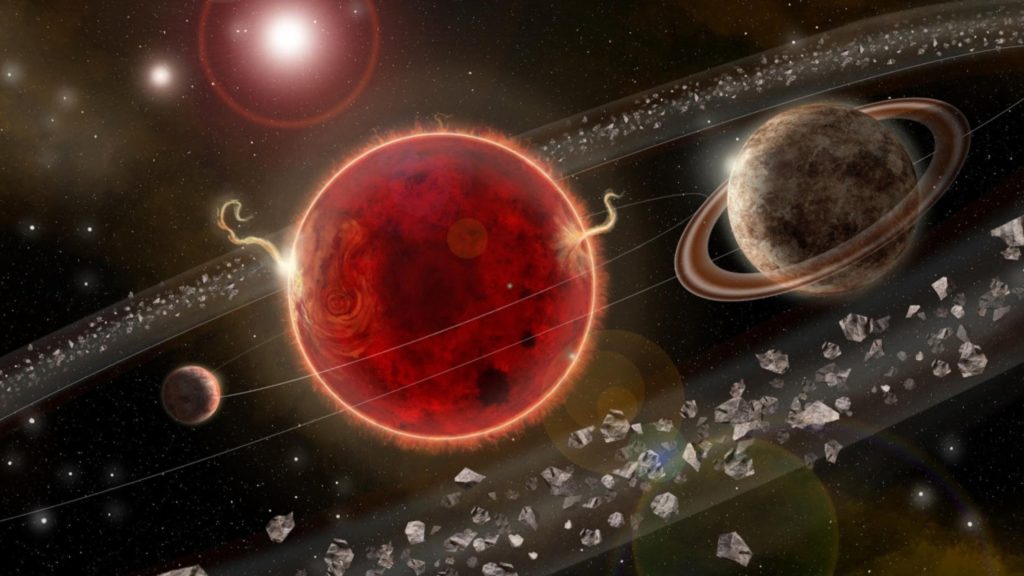 The idea of a technologically advanced civilization living around our nearest stellar neighbor is quite extraordinary. But currently, we’re left with more questions than answers: Why was the signal detected only once over 30 hours in April and May? What are signal’s characteristics—that is, its profile, strength, and modulation, and did it vary in frequency over 30 hours due to its motion with respect to us? Why didn’t observers alert the scientific community immediately after its discovery so other people could confirm the signal?

Of the 300 million exoplanets that could be habitable in our galaxy, which is 200,000 light years across, it would be an astonishing coincidence for two civilizations (ours and one on Proxima b or c) to be using the same technology at the same time. Although I love the idea, it seems highly improbable—which is why I suspect we will quickly find a more down-to-earth explanation for the signal’s origin. 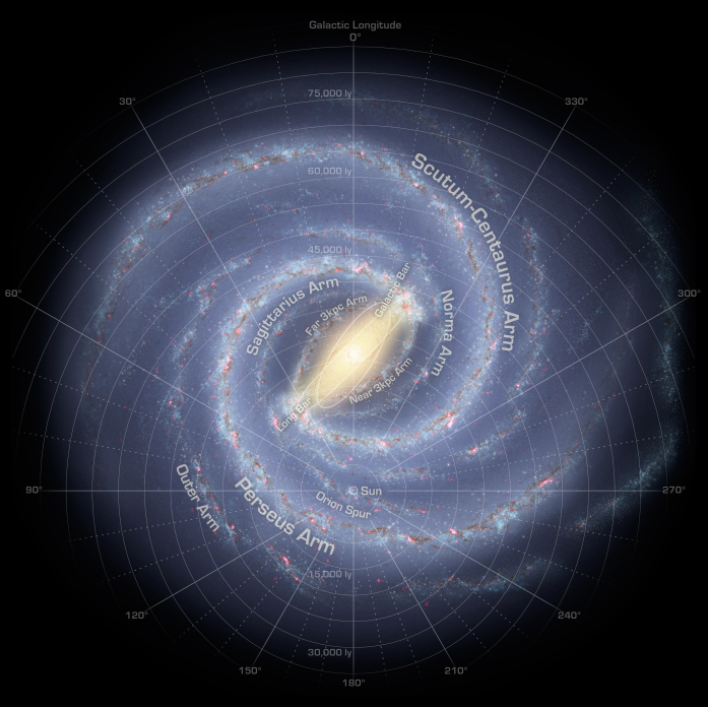 Our Galaxy The Milky Way which is composed of 200 billion stars and 300 million potentially habitable planets. credit: NASA

In addition to the science and mystery associated with this signal, we need to discuss context and the many conspiracies that plague modern society.

When I meet someone who believes in conspiracy theories involving scientists, such as those propounded by anti-vaxxers, or those involving aliens, I tell them that I know my colleagues, and there will be always be one who leaks a secret like this. And that is precisely what happened with BLC1, where the story started with a leak from a Breakthrough Listen scientist to the Guardian. And what started as a leak is now spreading quickly in the news. I hope my colleagues and reporters will emphasize that this signal is a candidate and NOTHING BUT A CANDIDATE. It’s far too early to speculate on the consequences of finding a technosignature on Proxima Centauri, even though it’s appealing and fun to talk about it.

2020 has been a crazy year on so many levels, even in the field of SETI. After the mysterious appearance of monoliths, and the announcement of the galactic federation, we now have BLC1, a curious and mysterious signal that might—or might not—have come from Proxima Centauri. It’s probably not alien and we will confirm this soon. Of course, as a SETI Institute scientist, nothing would please me more than to be proven wrong.