Beginning of the Apollo 11 's Commemoration

Live talk today: Implications of the Law of Accelerating Returns for the Search for ETI

URGENT: possible impact on the southern pole of Jupiter?

Forty years ago, the fifth human space flight called Apollo 11 was launched using a Saturn V from the Kennedy Space Center with three astronauts on board. Two of them (Neil Amstrong & Edwin ‘Buzz’ Aldrin) became the first humans to walk on the Moon. NASA is initiating various events to commemorate this important anniversary. 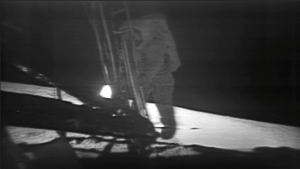 Neil Amstrong about to walk on the Moon. Watch the restored HD movie on the NASA website

I was not born yet  so I cannot tell you where I was when the Mission Commander Neil Armstron put his feet on the moon surface at 02:56 UTC on July 21. This moment is one of the few large-scale events shared by billion of people who watched it on TV.  Most of them remembered where they were the day/night it happened.

NASA released today restored high definition movies of the mission that you can watch on the following website. It is fascinating to watch these movies again and hear the famous line “That’s one small step for man, one giant leap for mankind”. I am not sure any of us can imagine the feeling of these astronauts. A colleague of mine brought to my attention a recent book written by Andrew Chaikin called “Voices from the Moon” which describes the Apollo missions as seen from the astronauts themselves.  The book contains various pictures taken by the astronauts (so rarely seen) but also text extracted from hours of interview that A. Chaikin recorded.

We must realize that these astronauts who are now ~70 years old and they are the only humans who put a fit on a foreign planet. It is intriguing to read some of their thoughts. One of them reported that he had a weird feeling on the surface of the moon because of being in daylight and see dark sky above him, something completely disoriented. Another one, who stays in orbit around the moon, mentioned that when the orbiter was located in the far side of the moon, where he had no communication with Earth and could see the unknown side of the moon, he had the feeling of pure calm and loneliness.

I realized reading this book and listening to the podcast by the Planetary Society that before being a space exploration project, the Apollo missions were mostly a human adventure. Hopefully, the movies, pictures and text collected during these missions will help us keeping alive the memory of this exceptional endeavor. Hoping that they will be more of them soon…