Now we have a plan… and hope

Discovery of a Super-Earth? 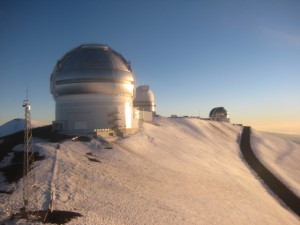 Picture taken from the CFHT cat walk. Gemini telescope and UKIRT at Sunset

The last 10 days have been pretty hectic since I am at the Big Island (Hawaii) with my family. I am invited by the Keck Observatory for 3 weeks to work on the Next Generation Adaptive Optics project.  The timing could not have been better since I am renovating my house, so I happily left the rainy San Francisco for the warm and sunny Hawaii. Once again I failed in writing 2 posts per week. My apologize for that but I am sure that you understand.

NGAO is the next Keck observatory major instrument project. An interesting and challenging concept since we aim at building an extremely efficient Adaptive Optics (AO) system (perfect correction from 1 to 2.5 microns) which will allow us to observe a large number of targets in planetary science, but also galactic and extra-galactic fields. This new AO system will work in the visible wavelength range, like Hubble Space Telescope, but will provide images with an angular resolution 4-5 times better. The system is still in the design phase and my contribution is mostly related to the writing the science cases and helping in designing and thinking in advance the observations with such complex instrument. I will go back to my contribution to this instrument in a future post most likely.

My colleague and friend Olivier Lai who is astronomer resident at the CFHT (Canada France Hawaii Telescope) gave me the opportunity to go the the summit last Thursday. Mauna Kea is the highest dormant volcano in the world with an elevation of 14,000 feet (4,230 m) and an Earth-based paradise for astronomers. Because of its specific location (middle of the Pacific) and its elevation, the seeing (related to the atmospheric turbulence) is exceptionally good (~0.6-0.8″ in average in visible). Additionally, the weather is clear and the absorption of the infrared light is limited. That’s the reason for which a lot of universities decided to build in the 80s their large telescopes on the top of the Mauna Kea. The CFHT, a 4m-class telescope, is used mostly now for large scale survey in NIR and Visible, but it has also an AO system (called PUEO) and several interesting instruments such as a high resolution spectro-polarimeter in visible (Espadon). Olivier is mostly involved in OHANA (it means “Family” in Hawaiian), a gigantic optical interferometer which will link various telescopes of the Mauna Kea. This a superb and challenging project that he describes with a lot of passion.

We invited for this visit Jeff B. and his girlfriend Mie. Jeff is my “adopter” who helped for my research through a donation made a the Adopt-a-scientist program of SETI Institute. It was an amazing coincidence that he was on the island at the same time than me, so we took advantage of that to give him a private visit of the summit and the CFHT.

I am attaching a few pictures taken during this visit with a few comments. I posted more of them on the following link: http://gallery.me.com/fmarchis#100086

Thanks Olivier for giving us a tour and Jeff for your donation to my research. 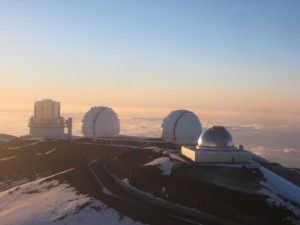 Picture taken from the CFHT catwalk. The domes of the Subaru telescope (leftmost), the twin Keck telescopes and IRTF (rightmost) are visible 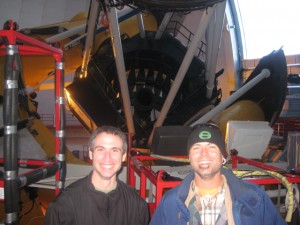 Jeff and Olivier in front of the CFHT primary mirror 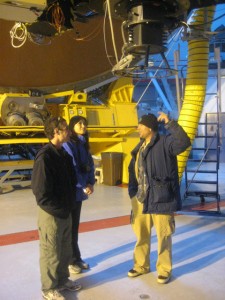 Olivier explaining Jeff and Mie, the history and design of the CFHT 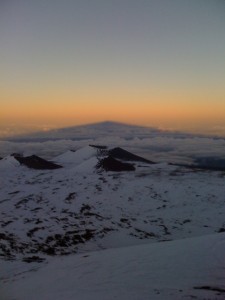 Shadow on Mauna Kea on the top of the Earth atmosphere 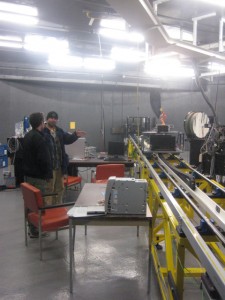 In the Coude room of the CFHT. The delay line of the interferometer called OHANA. 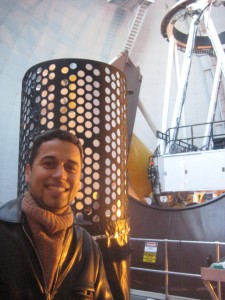 I am posing in front of WIRCAM, the IR large FOV prime focus camera. Notice the weird design of the enclosure. We called it the disco Ball 🙂