The International Astronomical Union (IAU) — the arbiter of planetary and satellite nomenclature since its inception in 1919 — recently approved a proposal from the MESSENGER Science Team to assign names to nine impact craters on Mercury. In keeping with the established naming theme for craters on Mercury, all of the newly designated features are named after famous deceased artists, musicians, or authors or other contributors to the humanities. 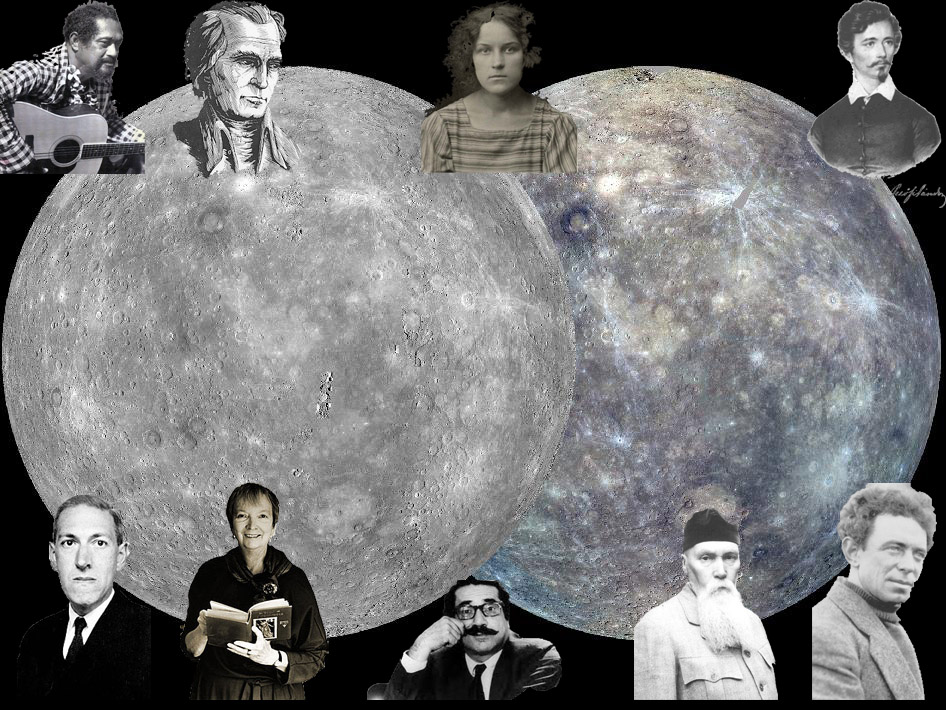 Global map of Mercury recently released by the NASA Messenger team. The globe on the left was created from the MDIS monochrome surface morphology base map campaign. The globe on the right was produced from the MDIS color base map campaign. Portraits of the nine artists, musicians and authors honored with the name of a crater on the planet. (adapted from NASA/Johns Hopkins University Applied Physics Laboratory/Carnegie Institution of Washington & Wikipedia by F. Marchis)

The newly named craters are

Ray Espiritu, a mission operations engineer on the MESSENGER team, submitted Pahinui’s name for consideration. “I wanted to honor the place where I grew up and still call home even after many years away,” he says. “The Pahinui crater contains a possible volcanic vent, and its name may inspire other scientists as they investigate the volcanic processes that helped to create Mercury, just as investigation of Hawaiian volcanoes helps us understand the volcanic processes that shape the Earth we know today.”
These nine newly named craters join 95 other craters named since the MESSENGER spacecraft’s first Mercury flyby in January 2008.

“We are delighted that the IAU has once again assigned formal names to a new set of craters on Mercury,” adds MESSENGER Principal Investigator Sean Solomon of Columbia University’s Lamont-Doherty Earth Observatory. “These names will make it easier to discuss these features in the scientific literature, and they provide a fresh opportunity to honor individuals who have contributed to the cultural richness of our planet.”

More information about the names of features on Mercury and the other objects in the Solar System can be found at the U.S. Geological Survey’s Planetary Nomenclature Web site:http://planetarynames.wr.usgs.gov/index.html.

MESSENGER (MErcury Surface, Space ENvironment, GEochemistry, and Ranging) is a NASA-sponsored scientific investigation of the planet Mercury and the first space mission designed to orbit the planet closest to the Sun. The MESSENGER spacecraft launched on August 3, 2004, and entered orbit about Mercury on March 17, 2011 (March 18, 2011 UTC), to begin a yearlong study of its target planet. MESSENGER’s extended mission began on March 18, 2012, and ended one year later. A possible second extended mission is currently under evaluation by NASA. Dr. Sean C. Solomon, the Director of Columbia University’s Lamont-Doherty Earth Observatory, leads the mission as Principal Investigator. The Johns Hopkins University Applied Physics Laboratory built and operates the MESSENGER spacecraft and manages this Discovery-class mission for NASA.