I mentioned on this blog on several occasions (see “the first light“) the Kepler mission which aims at detecting exoplanets through the transit method (a.k.a the small attenuation of light due to the passage of the exoplanet between us and the host star). Last week, during the AAS  (say “double ‘A’ ‘S'”) conference, the Kepler team announced the discovery of the first 5 exoplanets.You may remember that shortly after its first light, the Kepler team published an exquisite lightcurve of a known exoplanet transit called HAT-P-7b. This exoplanet was discovered from the ground by the HATnet survey and was reported by A. Pal in 2008 (see ApJ paper here). It orbits in 2.2 days around a star in the Cygnus constellation which is 1,000 light-years away from us. From the depth and shape of the occultation the Kepler team estimated that the temperature of the planet is ~3000 deg C (because of its proximity with its host star). This remarkable result which was published in Science, confirmed that Kepler had the capabilities to detect Earth-like planets because of the achieved photometric quality. 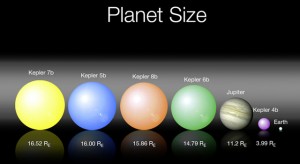 Beginning of January at the AAS conference, the Kepler team announced the discovery of the first exoplanets “poetically” named Kepler 4b, 5b, 6b, 7b and 8b (how original!). As shown on the figure nearby, these exoplanets are NOT yet Earth-like planets, they are giant gaseous planets with a radius 15 times larger than Earth, so more similar to Jupiter (11 times the radius of Earth). Since they also orbit very close to their host stars in 3-5 days, they are more likely to be detectable (transits happen frequently). Interestingly, the Kepler team mentioned that they detected them in only 6 weeks of telescope operation.

Because the Kepler telescope is supposed has a nominal period of operation until  2012, we should have more exoplanets announced in the future. Based on this preliminary result, after 3.8 years, they should have 170 “short period giant exoplanets” and hopefully several “Earth-like planets”. My colleague Gerard Van Belle from the European Southern Observatory mentioned on his facebook page and at the end of the session that he was chairing, astronomers will remember the year 2010 as a major shift in the search for exoplanets. There will be a before and  after Kepler era in this field. 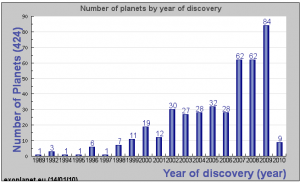 Histogram showing the progression in discovery rate of the exoplanet since 1989 (from the exoplanet encyclopedia maintained by J. Schneider)

Today (January 14 2010)  the NASA exoplanet counter that runs in the background of my computer tells me that we know 424 exoplanets! It is an extraordinary progress in this field. To give you a bit of personal background, when I started my master in planetary science in 1996, astronomers were still debating about the nature of the wobbling signal of 51 Peg discovered by the M. Mayor and D. Queloz in 1995. After a few years, the debate ended and the community acknowledged that it was probably due to an exoplanet called 51 Peg B. The extrasolar planets encyclopedia maintained by Jean Schneider of the Observatoire de Paris contains a list of these planets and their characteristics. I used it to generate the histogram attached here which shows the progression in the discovery rate. In 2000, we knew only 50 exoplanets, in 2009  84 planets were discovered, so the rate is definitely increasing. We should also keep in mind that several exoplanets were discovered by transits or by direct imaging, so these new worlds are better known. We are starting getting estimates of their composition and their temperature.

We may wonder why I am posting this discussion almost 2 weeks after the big annoucement. First of all, I did not attend the AAS conference, so in an attempt of keeping this blog original, I am trying not to repeat what everybody can find on the web or in the news. Additionally, I found recently this beautiful and interesting movie by Tony Darnell that summarized the Kepler discovery and I think you should watch it. 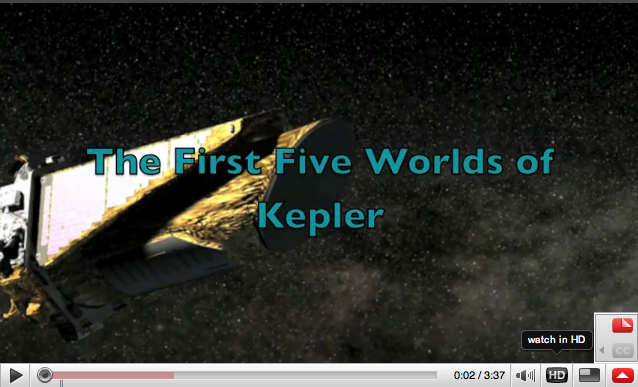 The First Five Worlds of Kepler - an animation movie by T. Darnell (click on the image to start the movie)