Let’s end this political hangover. It is time to fight 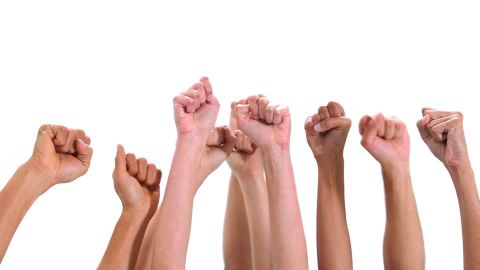 It was a tough night … one in which any dreams we may have had of “American exceptionalism” were crushed.

Instead of serving, as it has so nobly, for more than two centuries as a beacon of hope and light to people everywhere, this nation will instead see our first African-American president hand the keys to the White House to a low-grade reality TV star who is endorsed by David Duke and the KKK, “alt-right” crazies, and American Nazis. To the horror of many of us, our next president will be someone who explicitly rejects science, reason, and the values we all hold dear—values that are our only hope for moving this country and the world forward.

Unfortunately, an America that many of us neither know nor understand decided yesterday that the American Dream is not big enough for everyone—especially not people of color, LGBTs, and struggling immigrants. It was painful to explain this to my children this morning, when they awoke and were stunned to discover that Donald Trump was their next president.

So, what happens now? We have to act.

We have four years to show Trump’s supporters, Americas who he has duped and deceived, that they were wrong. Four years to fight against the radical agenda of Vice President-elect Mike Pence. Four years to defend, at political rallies and protests, values we hold dear and have fought hard for. Four years to understand that posting comments to Facebook and Twitter is not taking action. Four years to reach the many Americans who will need our help when they realize that Trump’s promises were empty and will make their lives worse not better. In short, we have four years to create a movement that resonates with all Americans, even ones who feel abandoned by the system.

Right now, today, this very minute, it’s urgent that we stop the blame game and focus on what we value. We need to be ready to help the many, many people who are only months away from becoming victims of Donald Trump and his hideous agenda. That is why I urge you to act now to support groups that have been fighting for our rights and our values for years, but that we may have overlooked or even forgotten.

If you care about our civil rights, join ACLU: https://www.aclu.org/

If you care about the voice of science join UCS: http://www.ucsusa.org/

If you care about LGBT rights, join HRC: http://www.hrc.org/blog/hrc-statement-on-the-election-of-donald-trump-march-toward-equality-continu

If you care about our planet, join Greenpeace: http://www.greenpeace.org/usa/

If you care about our democracy http://front.moveon.org/

If  you want a more progressive California and country, join Courage Campaign https://www.couragecampaign.org/

That was a terrible battle that we lost yesterday, but we can grow better by fighting together for what is right, true, and just. #AlwaysForward