On the first half-nights of November 29 and 30 UT, telescope time with the W.M. Keck II telescope and its Adaptive Optics (AO) was granted to us. The goal of this observation program was to search and study multiple asteroids. Since Jupiter was close to its opposition and observable at the beginning of the night, we spent a short amount of time to observe Io, innermost Galilean satellite of Jupiter, well-known for its exotic and spectacular volcanism.
An adaptive otics system (AO in short) removes in real time the effect of the atmospheric turbulences which blur the images collected from the ground with a telescope. Using the Keck AO system, we can really take advantage of the high angular resolution (or “image quality”) of its 10m aperture and record images with a great amount of details, with a spatial resolution up to ~100 km on Io.

With  Emilio Enriquez, a research assistant who works at the SETI Institute with me, we observed from the remote control room at UC-Berkeley in California. With the help of Julie, our telescope operator located on the top of the Mauna Kea, and Randy Campbell, our support astronomer based at Waimea, HI, the telescope and its instrument was ready on time and could observed Io at the beginning of the nights.

On November 29, we recorded observations of Io in three filters, namely Kc (2.3 um), Lp (3.8um) and Ms (4.7 um) from 5:21 UT to 5:30 UT. On November 30, Io was about to be occulted by Jupiter, therefore it was very close to the limb of the planet, so we managed to record one quick snapshot in K band only at 4:30 UT. I am attaching below the configuration of the Jovian system predicted by Xephem, a software that I use on a regular basis to prepare my observations. 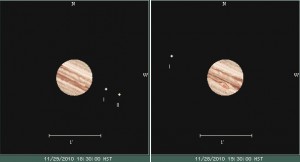 Configuration of the Jovian system at the time of our observations predicted by Xephem. Io (labeled I) was very close to the limb of Jupiter on Nov 30 4:30 UT (Nov 29 18:30 HST)

Unfortunately, the atmospheric conditions were quite mediocre over both nights. On Nov 29 we had high humidity which forced us to close the dome 80% of the night, and on Nov 30 we had absorptions due to clouds. Additionally because the exterior seeing was poor (~1″) for Mauna Kea, the AO correction quite limited, hence the image quality not as good as we could expect with the Keck II telescope.

Fortunately, mathematics, and more precisely inversion methods, came to rescue us. As I mentioned in a previous post,  we developed a deconvolution algorithm specifically optimized for AO observations of planetary bodies called AIDA. Since its first release in June 2007, AIDA is used by a growing community of astronomers and biologists who have the same goal: to improve the sharpness of their image data.  We are currently working on a better version of AIDA (v1.3) which I tested on these observation.

“An image is worth thousand equations” so to keep this post concise and accessible to most of you, I will spare you the details about the AIDA algorithm which can be found in the Hom et al. (2007) article and only show you the result of the deconvolution applied on these recently recorded Kc images. 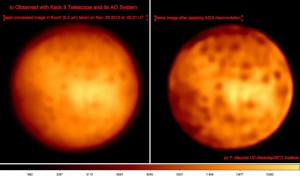 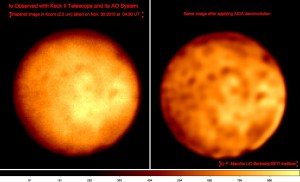 Both images show different hemispheres of Io, centered at a planetographic  longitude of 150W degrees for Nov 29 and 343W degrees for Nov 30. Consequently usingonly a few minuted of the Keck II telescope, we managed to obtain an almost complete coverage of Io surface. An attentive reader may have already noticed that Nov 30 image is more “pixelized” or noisier, since  it is the result of one quick (3s) snapshot observation whereas the Nov 29 image is made of the combination of 3 frames of 9 s exposure each. After applying the AIDA deconvolution process (right images), the gain in sharpness is obvious and albedo features such as dark calderas and bright frosty area can be easily spotted. 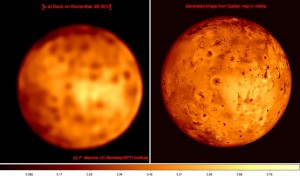 Comparison between our Keck II observation (left) and a generated image based on combining visible observations collected by Galileo. Despite a lower spatial resolution our Nov 29 ground-based observation reveals a lot of volcanic features on the surface of Io 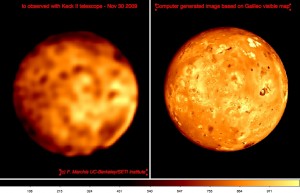 The figures shown above show a comparison between our AIDA-deconvolved observations and a computer-generated of Io based on a map with a resolution up to 1 km made by combining Galileo and Voyager spacecraft observations and available on the USGS web site. Even if our data have definitely a lower resolution than the USGS map, several well known features such as the Loki Patera, Amirani and Prometheus are detectable.The images suggest as well several surface changes such as the disappearance of the bright surface feature north of Loki. A more detailed analysis is needed to confirm this change on Io surface which are probably due to its intense volcanism.

It is  surprising that the Ionian volcanic activity seems to be quite low, with the absence of young eruptive centers which would have been detected in this wavelength range. For instance, several of these outburst were seen in our previous observations taken in 2001 (Surt-2001 the brightest eruption ever seen on Io), in 2003 (Tupan), in 2004 (an unknown volcano) and more recently in 2009 (Loki). Interestingly, Io volcanic activity was also quiescent in our observation taken in June 2010 with the Keck II telescope and during the summer 2010 with the Gemini telescope. The point of this monitoring is to reveal patterns of activity in the global activity of Io and for its well-known permanent volcanoes. This is a task that we started a few years ago and that will need to be continued for several more years to reveal periodicity in the activity of Io. 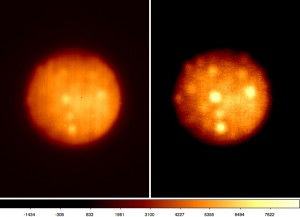 Lp and Ms band observations of Io taken on Nov 29 2010. Several active and low temperature active centers are detected (North is up and East is left)

A inspection of the images taken at longer wavelength (3-5 um) recorded on Nov 29 reveals the existence of several low-temperature active centers such as Loki, Prometheus, Kanehikili… Additional work to identify and extract their flux, thus derive the temperature of the lava (from 250-700 K) and the surface area of the lava flow or the lava lake, will be done in the future.

Despite spacecraft observations by Voyager 1 & 2 (1979), Galileo (1995-2003), Cassini (2000) and New Horizons (2006) Io volcanic evolution remains still unknown. An handful number of worldwide telescopes on the ground are able to monitor its volcanic activity, Keck telescope is one of them. From the current data we can speculate that Io outburst activity has been decreasing over the past 7 years. This could be due to an unknown mechanism in the release of energy produced in its interior by the tides. This monitoring, which costs almost nothing in term of telescope time (less than 10 min per night), should continue for several additional years before being able to reveal any cyclic activity on Io and for each permanent volcanoes.

Thanks to Conor Laver for making available its image generator of Io and Erik Hom and Sebastian Haase for their dedication in improving AIDA deconvolution algorithm.