The Phoenix mission on Mars

Yesterday at UC-Berkeley, I attended a talk given by Peter Smith, PI of the the Phoenix mission. Peter gave us an overview of the mission, its concept and a few information about the scientific results. A serie of articles will be most likely published soon in a special issue of Science, so i will not go through the scientific results in  details in this post. To summarize them and to impress people during your next dinner, you should know that the mission allows the detection of water ice in the soil, shows the absence of sulfate on the surface but the presence of a weird salt called perchlorate and detected falling snow in the atmosphere. More details can be found in the wikipedia web page which is quite impressive in quality and completeness. The team is using the remaining funding to analyze gigabytes of data/images which were received, so more discoveries will be announced in the following months and years. The key result is that no life was detected in the Arctic soil of Mars. 🙂

The talk was full of interesting background informations. The Phoenix mission is the first mission completely managed from a university. The University of Arizona  was extremely motivated by the project and decided to donate a building to conduct the entire experiment. Peter tried to involve various department in the projects, including the art department which made a large painting on the Phoenix building. That’s also the reason for which a large number of under-graduate and graduate students were involved in the daily routine maintenance of the mission. It must be exciting for them to participate to such activity.

The mission is called Phoenix since it is based on technology developed for the abandoned 2001 lander and the failed Polar Lander mission (crashed on Mars surface in December 1999). The mission was planned to work 3 months and in fact was used for ~5 months. It landed on Mars surface on May 25 2008 and the last signal was received on November 2 2008. The main goal of the mission was to find water ice on the arctic North pole of Mars and study the soil chemistry and the atmosphere. It ended when the martian northern hemisphere winter occurred. Without sun the mission ended since the spacecraft used solar panel to  produce energy needed to communicate and to warm the instruments. It may be possile that the mission wake up after the long winter in November 2009. It is in fact very unlikely since, the mission team revealed that it is snowing on Mars and consequently the fragile solar panels will be covered by 30 cm of snow which could break them.

Peter mentioned at the end of his talk that Phoenix is now in a beauty sleep, and it is waiting for a charming prince to wake up. It is very unlikely thought, especially on Mars, since we have never seen castles, dragons, and other fairy tale items, even if we have the capability using the HIRES instrument on board of Mars Reconnaissance, in orbit around Mars. 🙂 Attached below a picture taken by HIRES showing the Phoenix mission to illustrate the imaging progress made recently.

Have a nice weekend, 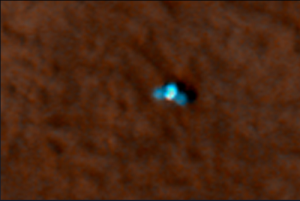 HiRISE camera acquired this image of the Phoenix landing site 22 hours after landing.Credit: NASA/JPL/University of Arizona