Wind on Mars and the Huygens-Fresnel Principle 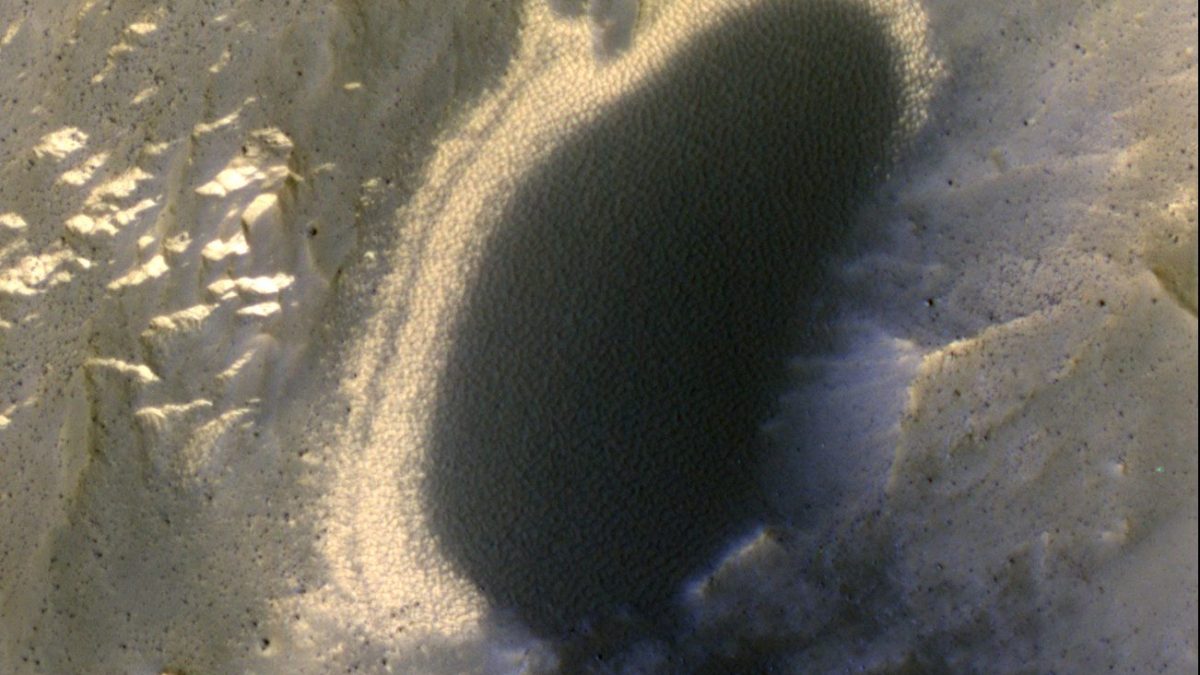 A few weeks ago I wrote about dunes leaving behind trails near the north pole of Mars. They do this in a few other places as well, but it’s not very common. Below is a rare example, this time on the floor of Hebes Chasma (one of the Valles Marineris), which is a tectonically-opened hole in the ground that’s about 6 km deep. I don’t mean to repeat the same topic, but geologists are usually drawn to terrain that so plainly lays out the geological story of an area, and obvious dune-generated layers are pretty rare. (Also pretty.)

What’s going on? A wind has blown sand from the left to right in this image, forming crescent-shaped “dome” dunes. As they migrate to the right, they’ve left behind their lowest bits (like a snail’s slime trail). That trail is also being eroded away, slowly, which is why it only extends a short ways upwind of the dark dunes. In that trail are a couple of dark bands within a bright surface. Those bands are the former locations of the dune slip faces, possibly places where the dunes paused in their trek (if you look carefully you may have noticed that the dunes no longer have slip faces – perhaps these dunes are being starved of sediment and are in their last gasp of dunehood).

But why the bright material? A good question. This would be a great location to target CRISM, Mars Reconnaissance Orbiter’s multispectral imager, to see if there are mineralogical differences in the bright and dark materials (there almost certainly are). But alas, this particular spot has not yet been targeted (is there anybody out there on the team who wants to do so?). My best guess involves surrounding bright terrains, beyond the edge of this frame, that are covered by wind-etched yardangs, so a lot of bright, fine-grained material is moving around in the bottom of Hebes Chasma. Some of it appears to have collected in the dunes, and something about it holds the lowest parts of the dunes together as the top parts of the dunes march downwind. It could simply be that the bright material in the dunes is made of a larger grain size, which tends to get left behind as finer, more mobile (and in this case, dark) sand, is preferentially blown downwind.