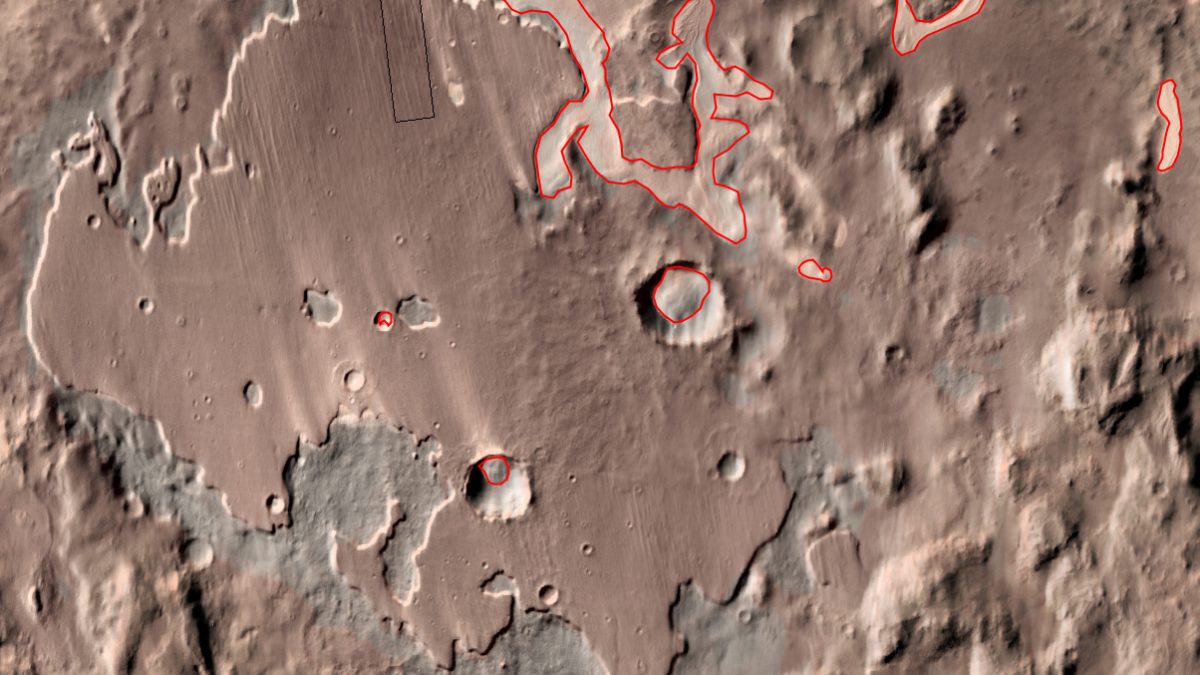 Are we tired of the pandemic yet? My kids haven’t gone to an actual school since last March. Fortunately we’re all healthy. I’m able to do most of my work, but it’s not easy.

So let’s go look at Mars. (I do that when I feel stressed and it usually makes me feel better.) Here’s a neat HiRISE image that was recently released (click on any of these images for a closer view): 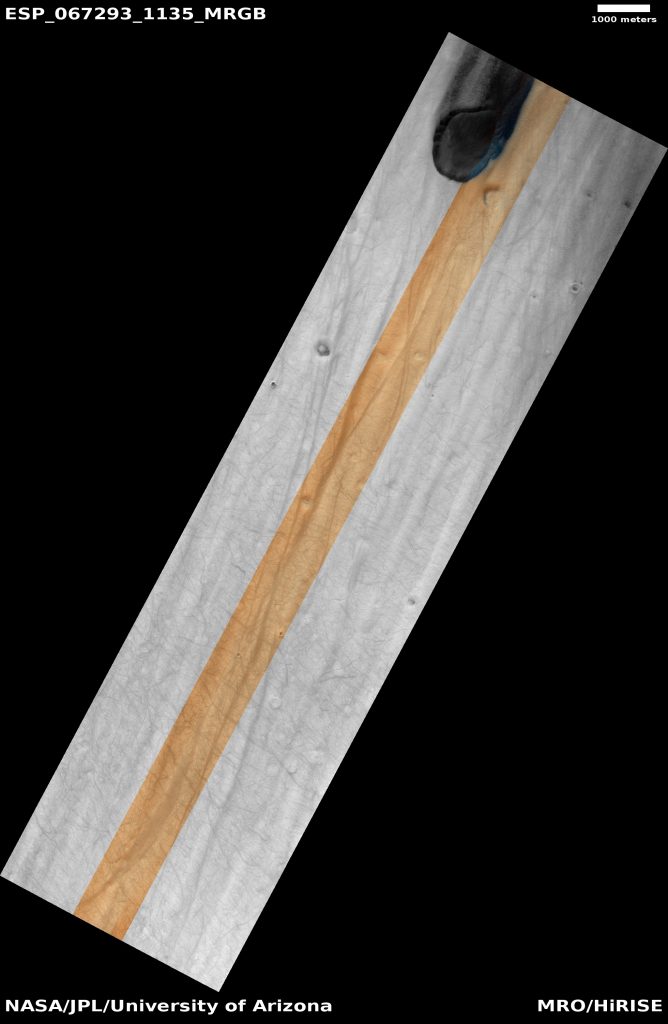 Lots of (somewhat) straight lines. The orange strip down the center is the part of the camera that collects color information. HiRISE image ESP_067293_1135, Image credit: NASA/JPL/Univ. of Arizona

It looks kinda crazy, doesn’t it? It’s a mostly smooth surface with some subtle linear grooves (or bumps, if you’re a glass-half-full person, which I am not). But it’s got a decent number of craters on it, so we’re probably not looking at a polar cap (the ice caps of Mars have some craters too but not many, mostly because ice can be easily sublimate away, so the ice caps don’t hold onto craters for more than maybe 1 million years).

There’s a big dark thing at the top of the image, which is probably another crater, but unlike the others, this one is filled with dark sand. And if you click on the browse image above and see it at full resolution, you’ll also see the faint tracks of dust devils, most of which cross the bumps/grooves at an angle.

If you look closely at the craters you’ll see that most of them have rounded rims, or no rims at all. This is a sign of erosion: something has worn away the bits of the crater that poke up. It’s most likely the wind. Most terrain on Mars isn’t like this, so it’s a hint that this stuff is pretty easily worn down by the (likely sand-laden) wind.

The number of craters indicates that this surface is not that young – it’s been dated to the Hesperian Period, which was ~3-3.7 billion years ago (Bernhardt et al., 2020). So whatever has worn down the surface either doesn’t act very quickly, or it did so for a short period (or multiple short periods) and then stopped.

I’m not sure exactly what this surface is made of. There are folks currently mapping the area (Bernhardt and Williams, 2019), so when their geologic map is published I hope they’ll have some thoughts about it. I can tell you that it’s sitting on the surface of Pityusa Patera, a ~3.8 billion year old volcanic caldera. But since the surface in the image is younger than the volcano itself, it might not be made of stuff that came from the volcano. It may be some sort of ash deposit from one of the three other volcanoes local to the area. Or maybe it’s dust (maybe ice too?) that accumulated a long time ago and it’s just sat there for ages.

Here’s some regional context, showing the location of our image and the four volcanoes in the area (the other circles are impact craters). The black arrow points to a little rectangle that’s our HiRISE image. 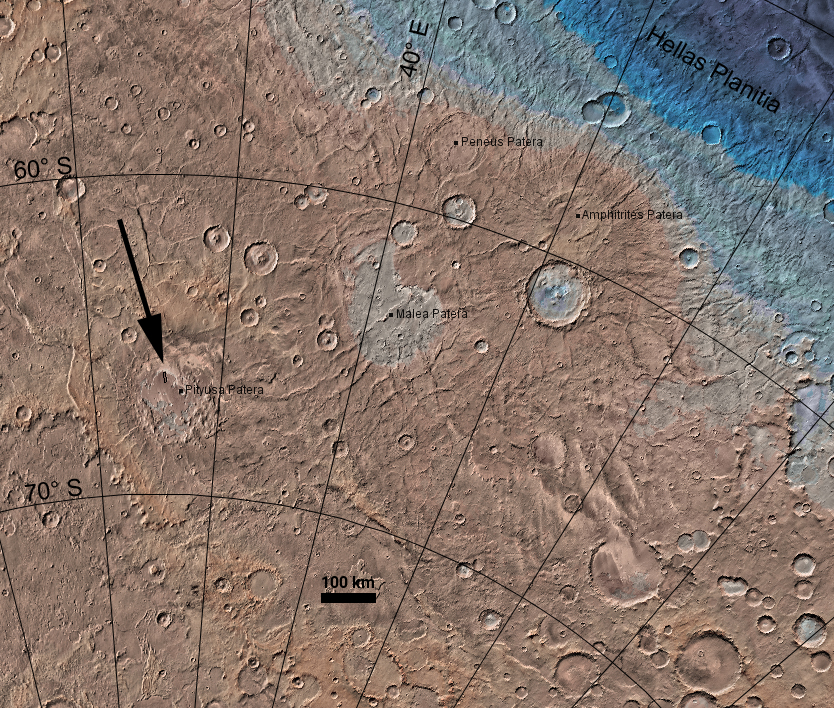 Malea Planum: the region around Pityusa Patera that includes three other ancient volcanoes. The arrow points to the tiny black rectangle that is our HiRISE image. The dark area at top right is a tiny bit of the enormous and deep Hellas Planitia. Image made with JMARS.

Here’s a closer view of the central part of the Pityusa Patera caldera (remember to click to see all the details):

Our HiRISE image is on a flat plain that ends in a steep cliff. Notice the wind streaks (light on the left image, dark on the middle image – the sand is only light on the left image because it’s hot!). The streaks seem to extend from dark patches of dunes. This dark sand has accumulated in low-lying areas (like craters), and sometimes the wind blows hard enough to allow some of the sand to escape from the low-lying areas and form streaks.

Notice how the streaks blow toward the top left? That’s in the same direction as the grooves. We know that windblown sand can carve out deep channels in rocks on Mars (called yardangs).

OK, so here’s what I love about this site so much: we don’t know how old most of the dune fields are on Mars. It could be they’ve only just accumulated in the last million years. Or maybe the sand accumulated there billions of years ago and the wind just keeps rearranging the sand. We also don’t know where the sand came from, in most cases.

But here, it’s likely that the sand that formed the dunes downwind of this area (and in the dark patch in our HiRISE image) is what carved out those grooves. It’s possible to date the surface, and try to extract an erosion rate. That would give us some idea of how long it took for the sand to cross the plain, groove it, and then pile up into sand dunes. It might even tell us how old these dunes are. I’ll go so far as to propose that the grooved plain may be a source of the dune sand. Sure, the plain is bright and the sand is dark, but if sand only makes up a tiny portion of the material in the grooved plain, then it might weather out and get blown downwind. So hiding in these grooves, and the craters they’ve partially scoured away, is information on the age of the sand dunes. Now that’s something that would be of interest to the planetary aeolian community.

So. Somebody go and study this. Anybody need a thesis chapter? A postdoc project? Talk to the folks in the references below, they’ve done some crater dating of the surface and might have some more insight (is it feasible or have too many craters been eroded away?). I’ve been wondering about this area for 2 decades now, hoping that someday we could use it to date the dunes. I’ve got too many ideas for cool projects, so someone please take this and run with it (I’m happy to collaborate, or maybe you can do the work yourself and just buy me a beer next time we’re at a meeting together in person).