Kafeditepisemesta is the name of a discussion group of writers, editors, journalists, lecturers,  scientist, and so on; whose share the same concern, which is about how to popularize science for general public in a hilarious way. Seriously, the name ‘kafeditepisemesta‘ is derived from the series of Douglas Adam’s satire “The Restaurant at the End of the Universe”. Literally, ‘kafe di tepi semesta‘ is translated to ‘café on the edge of the universe’. 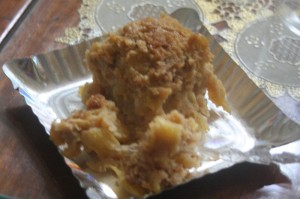 But this is not about parodying the masterpiece, instead, all we did just share the idea about how exciting the universe is, in anyway we perceived, either through, books, comics, music, and of course .. food! (A café without food & coffee?).

On our last discussion, we’re reaching to a point, which is, seems, there is a problem on science journalism here. ‘Seems’, that means, we only sense, without enough supporting evidence. But, we felt that somehow, science journalism in the verge of ‘free fall’.

In this modern digital world, news, (including science), rapidly propagate, instant and free. So, who will take the responsibility for the quality of the news?

For instance (for example only, ignore the accuracy), from one news “According to Mayan civilization, the end of their calendar cycle will be on 2012-12-12”, then there is another news “According to Solar physicist, the Solar activity will be on its peak ‘around’ the 2012.” To add to the flavor, “During the Solar storm in 1989, there IS the case of electricity failure”.

Okay, three cases, maybe (i)rrelevant to each other, but what if those cases become this:

“According to Mayan prophecies, that the world will end in 2012 because of on that time, the nature will be so wild, like the Sun will wildly engulf the earth, and the effect will be catastrophe to our very life, yada yada yada .. “

Oh .. okay .. Is that so conclusive? Well, without proper assessment, there are numerous cases that the scientific news, instead of give better understanding, lead to confusion & ‘panic’. Why does that happen? There can be because of various reasons, like, the first, the prestige of the media. With such a growing various interests of people, including the inquiry of science news; so as if, the media without science news looks like a media from ‘stone age’, so, let’s cater the public with the news, and compete with other media. The most prestigious media is the one who can deliver the news fastest, up-to-date and quickly catch the attention the audiences, while the competitor left behind.

That would lead to the second reason, instead to give the people proper information as the content, the information has turned into commodity, without give attention to the detail & accuracy, as long as the news sold and so be it. Often, without proper evaluation, the information published, either because of the need of immediate release, or because of lack of basic understanding about the knowledge. That would lead to the third possibilities, lack of basic understanding about the knowledge. So, where would the information the media obtained? Obviously, the internet is the wellspring of news in the current scheme of journalism.

I will not blame the progress of the internet as the new face of the media, but the other side of a coin is indeed a different face. While the news from the internet can be instant, and free, but who will guarantee the quality? Okay, maybe if a media took news from the press release from a prestigious agency, in which the agency have a high quality standard. But never forget, that the new scientific finding did not mean immediately an actual fact (outside the scientific nomenclature). Never confuse the general public between the world fact and scientific fact. The line can be obscure, so proper judgment is needed, and this is the fourth reason to consider.

So, who will responsible for propagating the news to the people? Is it the journalists should have the better knowledge on particular subject? Is it the scientists should consider themselves to spare their time between doing their homework and disseminate the sciences? Or should the general public also contribute to the propagating the news as the public journalism? For sure, everyone can contribute, in various ways as long as keep biases as minimal as possible.

More questions than answers; call it an intuition, but i ‘feel’ that if we do not do something, the science journalism will soon succumb, and will not recover in a short process, (or perhaps to a point of no return?); while we will go to the chaotic situation, without fine line between science or pseudo-science or even no-science at all. To raise the awareness about disseminating the science in popular way, is about to give better understanding about knowledge, and it requires action from all those who care, and properly describe the face about our nature in a scientific way. Let’s help.

It is still too premature to consider my thought as conclusive, since this merely a rough sketch from larger scenery on science journalism. Much work to do to tie the loose end and that is the purpose of kafeditepisemesta, to promote proper science journalism for general public. For now, i think i enjoy the first menus from the cafe: the pineapple muffin & peyeum (fermented cassava root) cake with a hot glass of java. Nyam ..