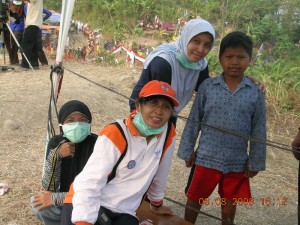 This is August, and like all the August in every years before, we celebrate the independence day; so, there should be lot of fiesta here & there. Like the Subang Regency, about two hours from my city road trip, they celebrate the day by arranging the Regency Boy scout Jamboree. What makes the story interesting is, for this year, the Regency invited my office for the Jamboree, because, they wanted something new for this event, they want to learn about the space, they said. So there we were, we set our camp & join the frolic through the park.

Like all the previous activities for general public, we catered various activities that related to the sky, of course, the main menu is the telescopes, and also there were games, quizzes, visual-aid creation competition, names a few; but the main attraction was the UNAWEs’ giant snakes & ladders! Even adult people also enjoy that game! 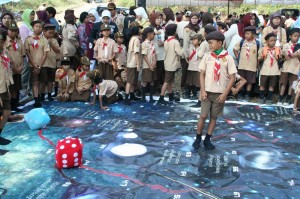 The Snakes & Ladders by the young children 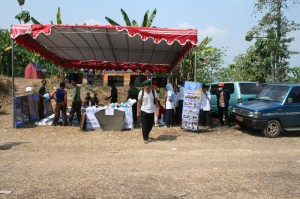 The same game, but played by grown up boys

In such a heyday of the festival, with added flavor of space science exhibitions, i found a little bit ironic; because, Subang Regency is about two hours road from my city, and also from Bosscha Observatory, the only largest one astronomy observatory in my country, most people in the region never have the idea about what the Moon looks like. For some, thought the Moon like a shape of coin, because its face never changed; for others, thought the Moon like a perfect spherical shape; while for others no clue at all. In fact, the Moon is used for time marker in the religious practice, (the people in Subang Regency practice Islam, and they use the Moon for the calendar), but they never have idea about that.

We learnt about what they know, because during our camping, we set our telescope, and projected the image of the Moon directly to the screen, instead eyepiece, so they shouldn’t in line to peer through the telescope. And while they stare at the Moon surface, they learn about the features in the Moon, because we provided large poster of the Moon map. For the first time they saw closer about our natural satellite, the closest celestial body to us, while learn the scientific facts about it. 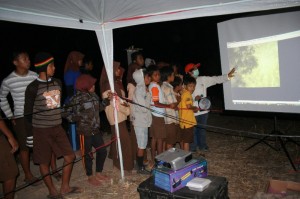 Explaining the moon to the young kids 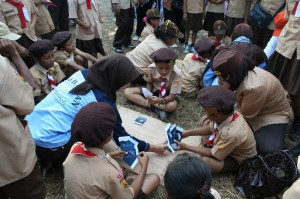 The quarts game of UNAWE 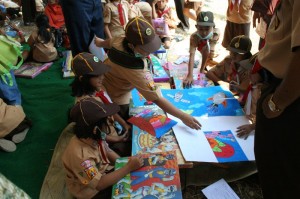 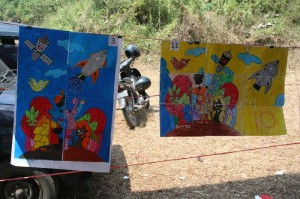 The results of drawing competition 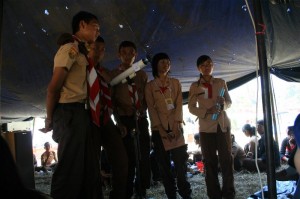 The winner of visual-aid creation competition, special credit should be given, since they cannot afford the lenses, they have to borrow the lenses, just to join the competition. 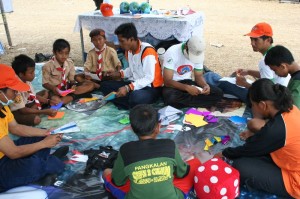 It's the boys toys .. the origami

With such about 8000 boy & girl scouts flocked, and various activities catered, not much we can share for them, but that does not mean that they did not learn something. Perhaps, one among those crowds, incited his/her curiosity, and set his/her endeavor on the path of the universe. 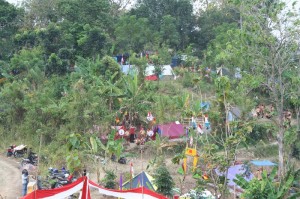 The scenery from the camp 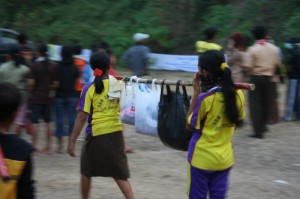 They want to wash their clothes 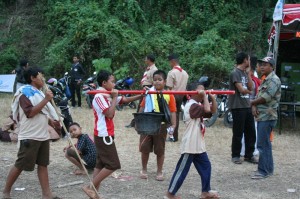 They carry the water to their tent 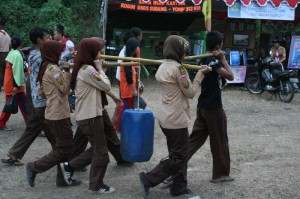 Let's work together to carry the water 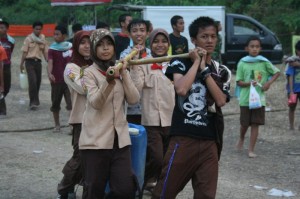 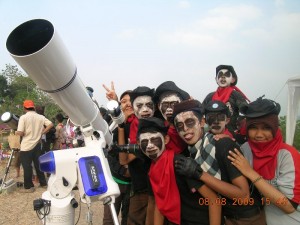 Like for instance this young boy, his name is Rochimin, from (SD) elementary school of Sukareja, the village of Sukasenang, Subang. Unlike any other friends of him, who had been so curious while flocking around the telescopes, he chose the different attention. Instead, he gathered around us in our post, asking us questions. Questions, questions, questions, well, you ask question when you have insufficient information, so ask away the questions. Not much of his friends asked questions, at least they think they have enough from our explanations. But, this boy is never enough. During his spare time, he went from his tent to ours, just to learn something new. 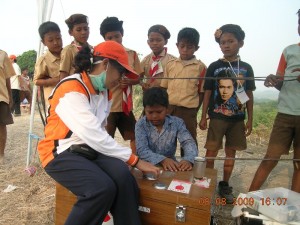 Rochimin was learning about celestial mechanic

When the first time he came to our post, his first question was: “My teacher told me that the Sun stands still, while the Earth moves around it, is that true?” Hmm .. Such a keen learner he is. Well, if a young boy/girl is a keen learner, there is nothing new; there are many keen learners that i ever met before. But if a 5th grade student ask me question, “Is there a magnetic field on the moon?“, now that is something. Never before, that question asked, not even by higher grade students, and suddenly, asked by a 5th grade student. 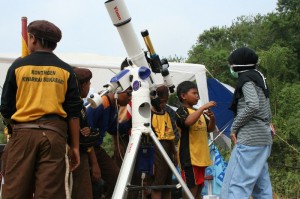 Rochimin was questioning about how the Earth revolves

His teacher told that his brothers didn’t continue the study; even if Rochimin could continue, that would be a difficult situation for him & his family for several reasons. True that education can be so expensive. Regardless, it is the will, eagerness, effort & excitement that drove him up to that question. Different from the other children that awe with the sight from the telescope, but then, enough, they didn’t continue. Rochimin has the excitement of his own. At least three times a day he visited our tent just to learn something new.

When we asked him, “What will you want to be, when you grow up?“, simply, he answered, “I just want to be a Kyai.” (Kyai is an elder religious figure in Javanese Islamic tradition). Wow .. For much of the children of his age usually will answered with such a fancy profession, such as medical doctor, army man, police, pilot, etc. But he gave different answer, and unusual one. There is nothing wrong with his choice, but, that reflects his humbleness and less complicated life he sees. Simply, he comprehends the world as what he sees around, yet he learnt something, and he saw that being a Kyai as a noble thing to do.

Reflecting Rochimin is like the reflection of the Moon. Moon is in fact a large chunk of rocks that float in the sky, yet it reflects the Sunray gracefully. Rochimin might not have the luxury of education, but that does not make his life a bleak one. He has the passion & will to study, and that would illuminate his path, whatever path he will choose in his life. I do hope the best for him, the best as the reflection from the Moon that shines & sooth the Earth, as he has learnt.