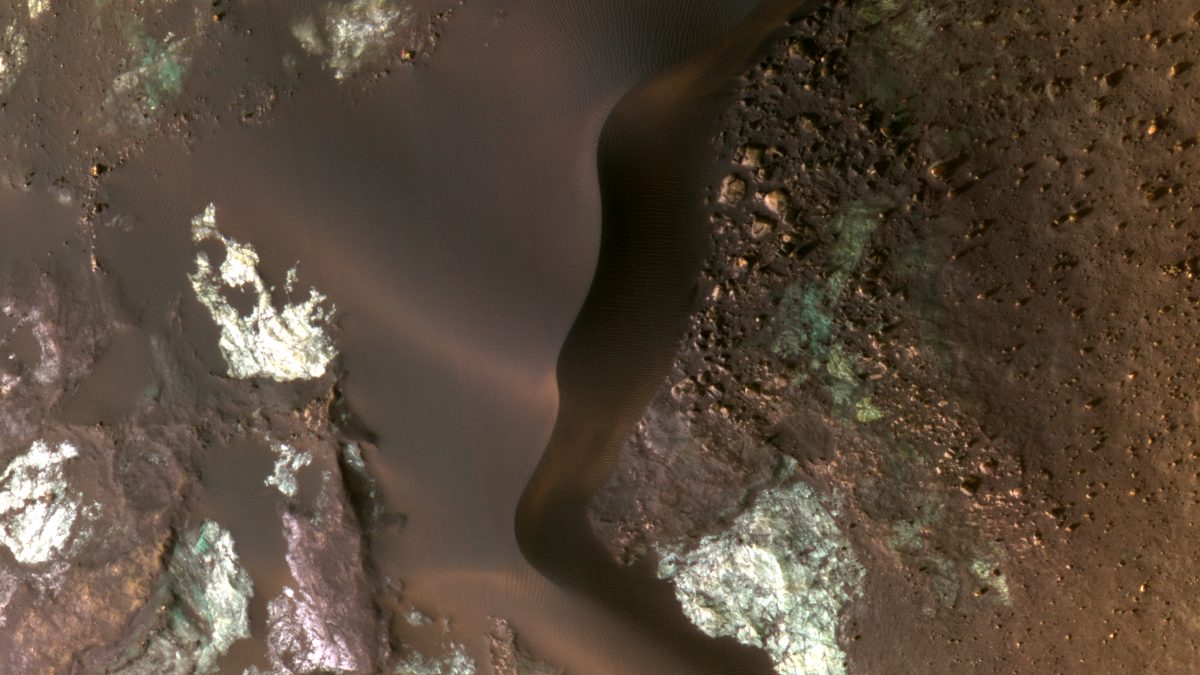 Dunes don’t usually form on hills. They’re made of sand, which is moved by wind (and water and ice) and tends to linger where it gets stuck. You probably know this intimately if you’ve spent time at a sandy beach. It’s true not only on the scale of the threads of a beach towel and in jeans pockets, but also on a larger scale. Dune fields are made of windblown sand that piles up in valleys, or whatever topographic low it’s being blown past. The biggest sand sea on Mars, for example, is found at the bottom of the biggest basin on the planet (most well-known is Olympia Undae). The second-largest accumulation of dunes on Mars (outside the huge north polar sand seas) on Mars are found on the floor of the enormous and deep Valles Marineris (examples like these).

So when I was looking for new backgrounds for my computer desktop in Kevin M Gill’s flickr site, I was confused when I came across this beauty: https://www.flickr.com/photos/kevinmgill/50295306047/

It’s a little dune field on a hill.

OK so he was interested in this image because it’s dunes sitting on bright rocks that contrast in tone with the surrounding surface, which is also cool and probably holds a lot of information about bedrock mineralogy. His view is looking toward the south (so I surmise that the sun is probably placed pretty much where it would have been when the image was taken).

But I’m a dune person, so I saw a big dune on a hill just sitting there in the middle of a crater.

So here I am trying to explain it. 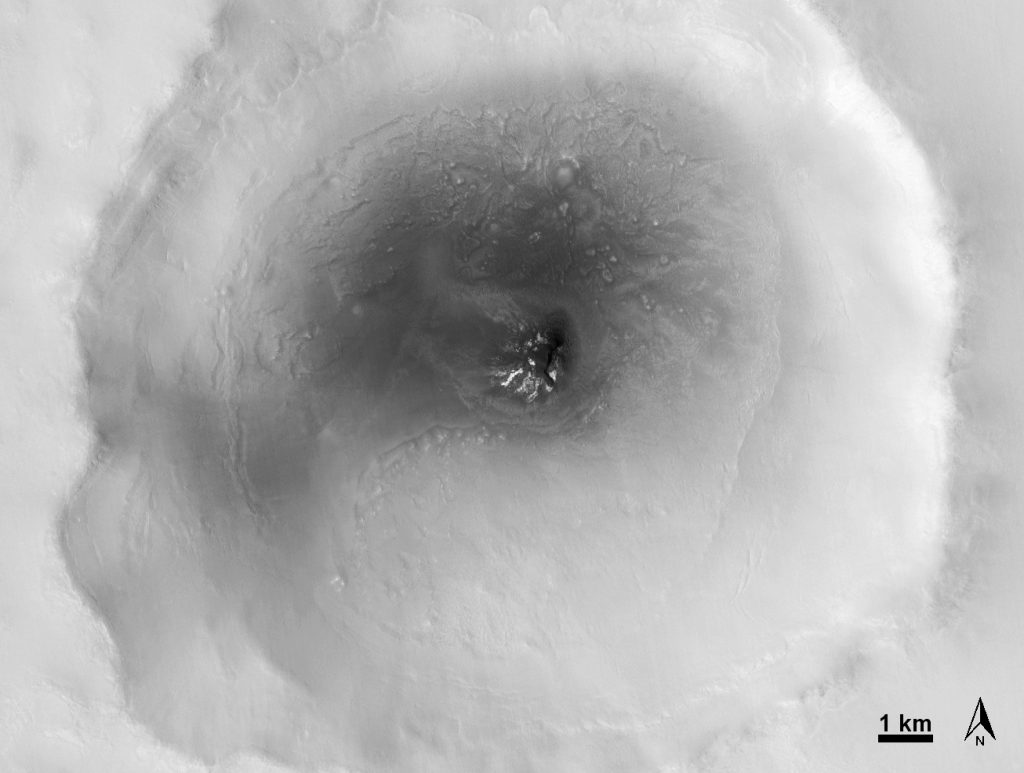 CTX image of our dune-on-a-hill in the CTX global mosaic. (It’s the dark thing at the very center.)

Let’s have a closer look at that dune field on its hill. Here’s a perspective view using JMARS, looking toward the NNW: 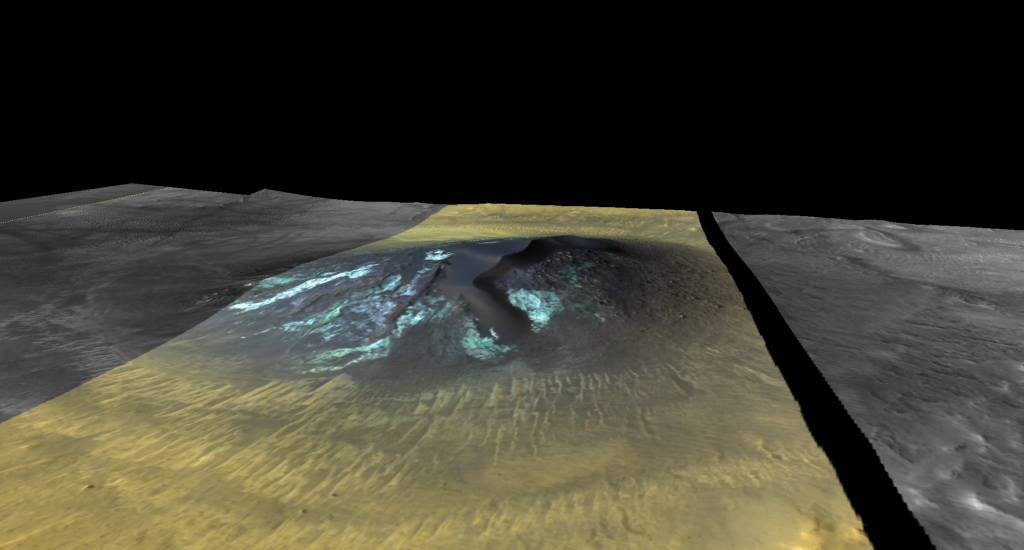 See what I mean? Weird.

At first glance this dune looks like a transverse dune formed by westerly winds. This type of dune migrates, it doesn’t sit still. So it shouldn’t have stayed on the hill. It should have moved off to the east. It’s so weird.

Until we have a closer look. So here’s a top-down view of the dune at full resolution: 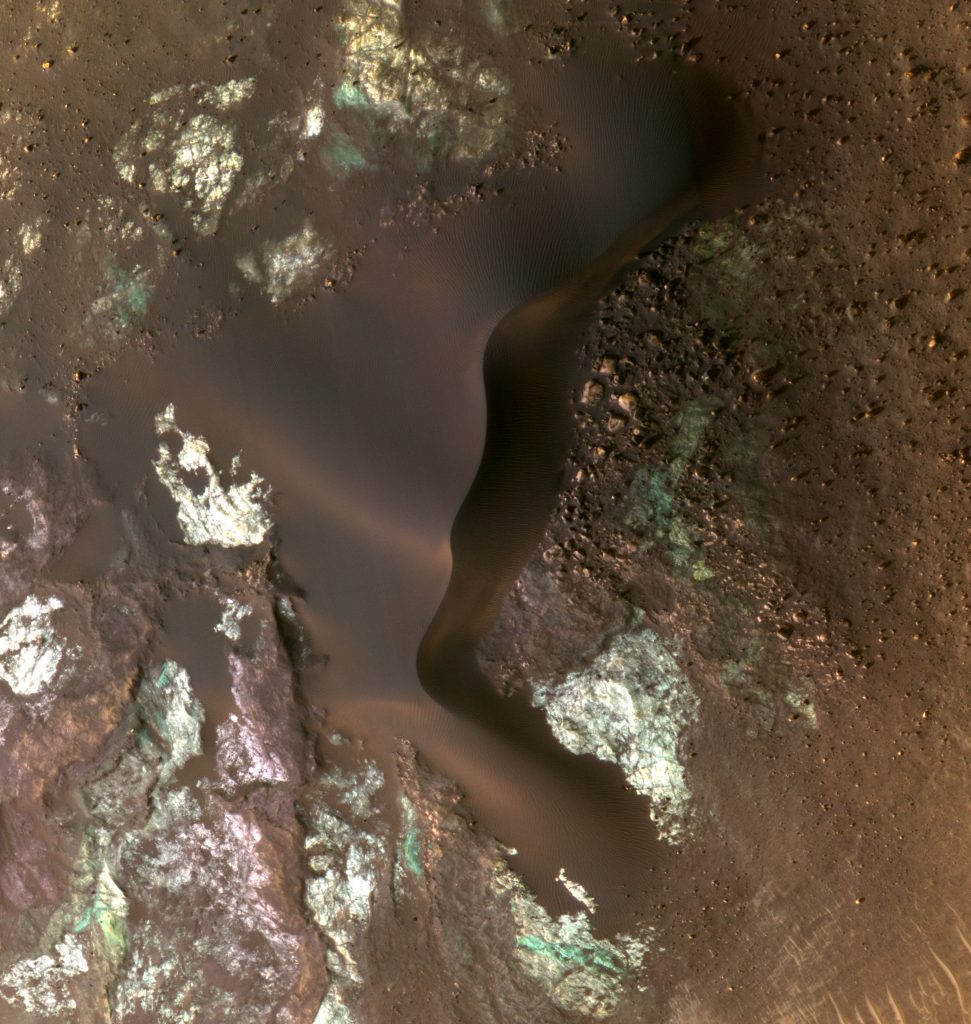 Wow! Well look at the pink and green and white rocks our dune is sitting on. I’d sit there too if I had the chance.

OK so from here I can tell we’re not dealing with a simple transverse dune built from a westerly wind. The eastern slopes (on the right) are the steepest, which suggests that there is indeed a westerly wind at play, pushing the dune toward the east (right). But those slip faces are covered in ripples, not the grainflow avalanches that would indicate a wind purely from the west.

Here are some hints about what’s going on here:

Figuring this out in detail would take a bit more work, but that’s a start at least.

So this dune-on-a-hill is actually much like many of the dune fields on Mars. It formed where it is because the winds converge there (I suspect that many of the dune fields we see on Mars only exist because of wind convergence). For whatever reason, that happens on top of a hill in this spot, which is unusual for Mars (or Earth).

And it’s a pretty cool hill, all fluffy white and green and pink. Think of the dunes as chocolate sprinkles on top of ice cream. It would be a neat place to visit.