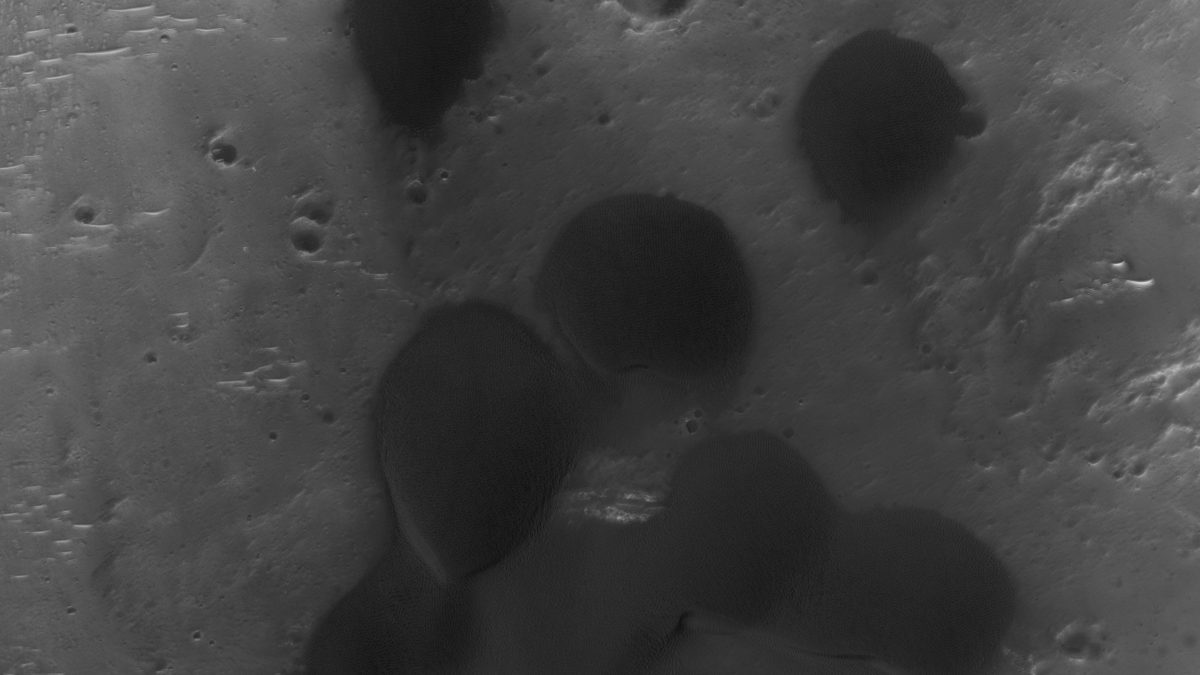 There are a lot of dune fields on Mars. Over the last ten years I’ve been part of a group that’s mapped out the big dark dunes on the planet to see where they form, and to understand the sedimentary and meteorological processes that control their formation. We compiled a database showing their locations and various physical characteristics.

Wait, why do piles of sand form in the first place? On Earth, it’s because:

That mostly amounts to dune fields piling up in arid places, where there’s not a lot of vegetation or rainfall to stop the wind from moving sand around. And even then, you don’t see piles of dunes wherever you look. Dunes only pile up where there’s a lot of sand, which tends to happen along coastlines or on riverbanks. Some dune fields are found downwind from where glaciers once stood, as water draining from melting glaciers carried glacial sediment downslope.

Usually dunes are found in low-lying areas, where the wind dumps sand and then can’t remove it quickly enough to keep it from piling up.

We know from our database (and from the work of many others before that) that those same three rules also hold on Mars. There aren’t any vast coastlines on Mars, though. And there are billions-of-years-old river channels and lakes that produced a lot of sediment, but a lot has happened to them in the meantime, and you don’t typically see dunes associated directly with these features now (perhaps once that was the case, though). Nowadays Mars dunes are most often found inside of craters – low-lying areas where, like on Earth, the sand piles up and gets stuck there. They’re also found in other low-lying areas, like the Valles Marineris, and off the edge of the northern polar cap (the north pole is inside of a large deep basin).

The group I work with published the Mars Global Digital Dune Database (MGD3) in three parts:

These maps are available to the public. This database includes 1,610 dune fields, which span a total of ~990,000 km2. That sounds like a lot but it’s only about 0.68% of the surface area of Mars. These numbers can be compared to Earth, in which a similar estimate of dune coverage (from Livingstone and Warren, 1996) is ~5,000,000 km2, which is almost 1% of the total surface area of Earth (including the oceans). So despite its oceans and rain forests and lakes, Earth’s deserts are big enough to have a higher proportionate coverage of sand dunes than all of Mars. I know, I go on and on about aeolian processes on Mars, so what’s the big deal? Well, it’s not Mars’ dunes alone that make it such a spectacular desert planet (of course we didn’t include TARs, yardangs, aeolian dust mantles, dust devils, or wind streaks in our survey, all of which combine with the dunes to make Mars a deeply aeolian world). I think these numbers just highlight how amazing and diverse our own Earth is!

Ever since we made the MGD3, I’ve kept a running list of smaller dune fields that we missed, either because they were hard to identify using the data sets we had at the time, or because there’s better image coverage now than there was when we first compiled the database. When I see new images or papers with figures including dunes, I always check to see if they’re in our database, and once in a while they’re not. As of today I have a list of 957 small dune fields that aren’t included in the MGD3. I figure someday we’ll want to update the database. . So far my additions have added an extra ~30,ooo km2 of dune coverage, which isn’t a lot compared to the initial database. I’ve found there are lots of little dune fields all over the place. Depending on what you’re looking for, they might or might not be important – if you want to look at regional trends in wind patterns, they might be important, but if you’re looking at sediment budgets then they’re probably not important.

So here’s an example of a small dune field (it spans ~2 km2) that wasn’t included in the MGD3. It’s been imaged by HiRISE, but not because they wanted a pictures of the dunes (remember, the HiRISE team didn’t know the dunes were there because this little dune field wasn’t in the database!). This area was imaged because it has a lot of the mineral olivine, a common component of dark basalt, and so it’s likely that there’s olivine in these dunes. 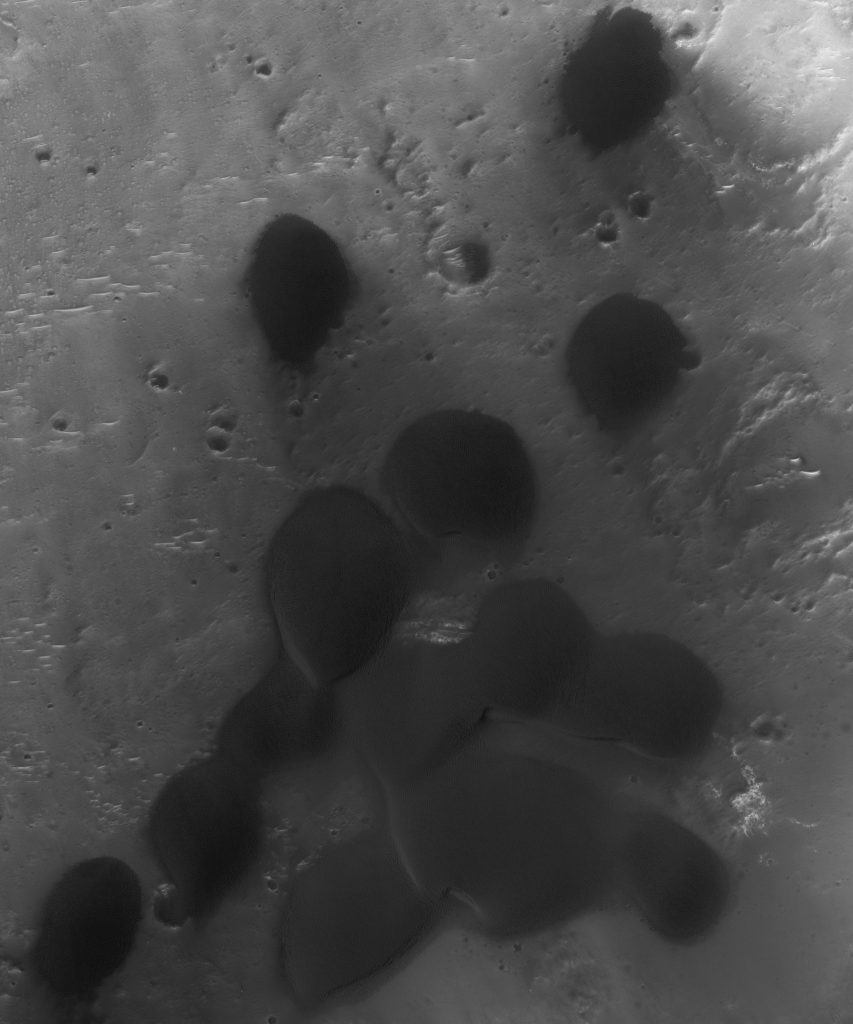 In my next post I’ll talk about what we learned about Mars from our MGD3 survey.