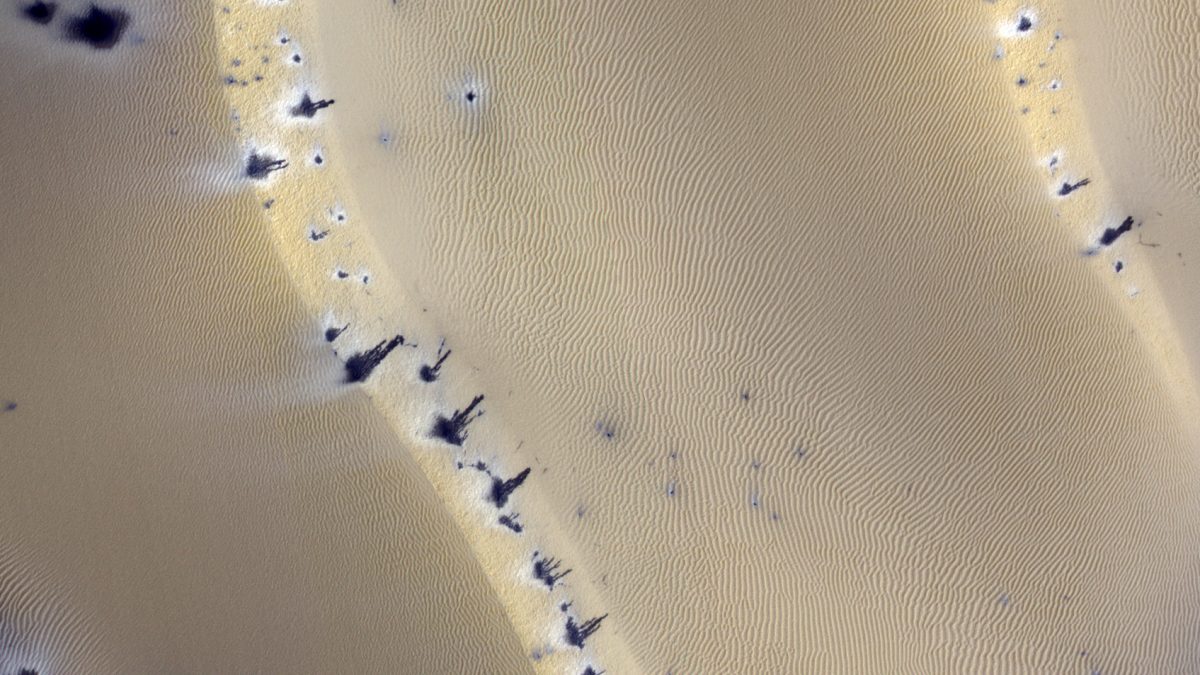 A couple months ago I wrote a blog post about defrosting dunes in Jeans crater, some wild southern polar dunes on Mars. Well it’s been that time of year on Mars, so I’m going to show some more. These aren’t in Jeans crater, but in another unnamed crater at about 70°S (that’s pretty far south). First let’s have a look at the crater, for some context:

On the left above are images of the crater and the funky-looking dune field inside it. On the right is elevation, which might help you see where the craters are. Our crater is about 43 km (26.7 mi) across, and its floor sits at an elevation of about 500 m (0.31 mi) above the Mars datum (what would be sea level if only Mars had big oceans, but it doesn’t so someone picked where “zero” is), which is 800-1300 m (0.50-0.81 mi) below the surrounding plain. There’s a smaller crater on the floor of our crater, and another small one just on the edge. Our dune field sits on the northwestern part of the crater floor, spilling a little bit into the interior crater.

The HiRISE image I’m going to zoom in on cuts across the northern edge of the dune field. But first let’s talk a little bit about the black and white CTX image of the dune field. Dunes on Mars are pretty dark (like these for example). But this dune field is sort of mottled. It’s not frosted in the image above, since those images were taken at the height of summer when the frost had all sublimated away. Maybe the sand here comes from different sources, some of which are bright. Or maybe there’s some dust on parts of the dune field, and the dunes are too frozen for the sand to move and kick off all the dust.

From this distance the dune field looks a bit messy, like it’s no longer active and maybe starting to erode. But the real story must be more complicated than that. Why? Because the dunes are covered in fresh-looking ripples. Let’s have a look: 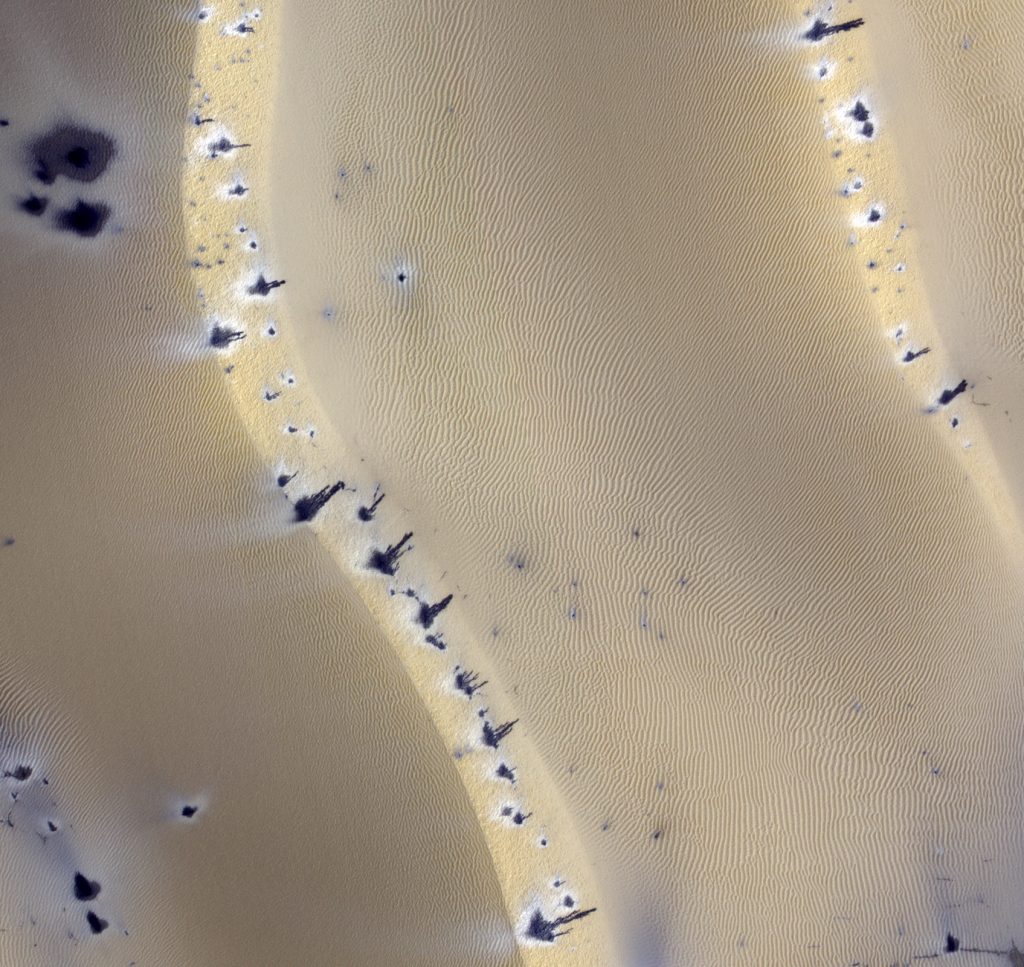 Pretty, huh? These are rippled dunes that have been covered in bright seasonal frost (this time it really is ice!). The dunes’ slip faces, which are steep lee slopes, face to the right here (and if you’ve been paying careful attention you’ll notice that it’s upside down from the CTX image above – close to the south pole, HiRISE likes to project its images differently, so north isn’t always up!). Those slip faces have some weird dark spots, some of which have finger-like branches. Those are defrosting spots, areas where the springtime sunlight has started to penetrate through the ice cover. The fingers all extend downslope from their dark spots, so they’re some sort of gravity-driven movement. Maybe chunks of ice have slid downhill, or maybe it’s loose dark sand that’s found its way down the lee slope.

The dark spots are surrounded by white halos. CO2 and H2O ice are both white, so we might be seeing places where sand released from the dark spots has scoured the surrounding ice free of yellow dust. That tells us that the seasonal ice was sprinkled in dust at some point over the dark winter. It also tells us that the sand is being mobilized, maybe by the wind and maybe by being ejected out of the dark spots – in some places spots like these seem to form violently, like little geysers.

Despite all that frost-related activity, the ripples are everywhere, and they don’t seem to be eroded. They’re probably frozen under the ice cover, but once the frost is gone, the wind will be able to mobilize them. So we’re looking at a wonderful interplay of ice and wind, where ice rules the winter and wind rules the summer.