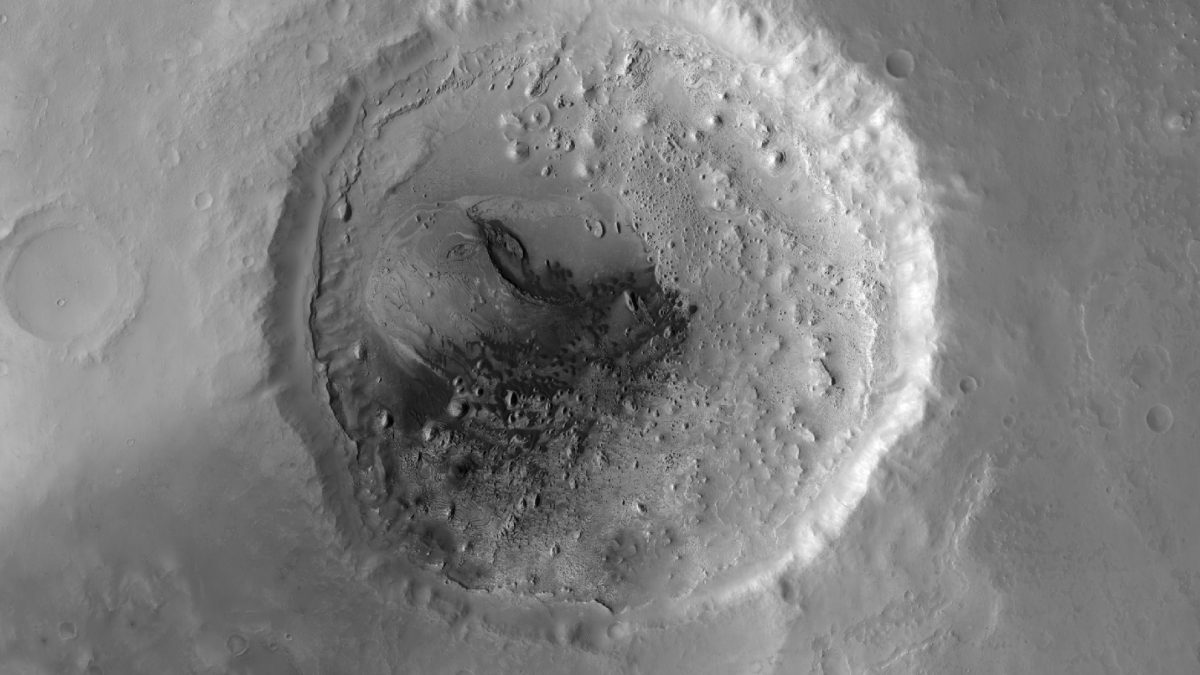 It’s been an interesting few weeks. Like many folks, I’m trying to work from home while keeping my kids busy. I’m fortunate to have a job that allows me to work at home, so I can continue to make progress away from the office. It does mean that my work at the Mars Wind Tunnel at NASA Ames is on hold, as is my planned dust devil fieldwork. That’s a bummer. But I’ve got plenty to work on in the meantime.

I thought today I’d show off one of the many craters in Arabia Terra on Mars that has a lovely dune field. Arabia Terra is a vast region in the northern tropics that’s full of craters and windswept sedimentary rocks. The Mars Exploration Rover (MER) named Opportunity landed in a part of Arabia Terra called Meridiani Planum. Today I’m going to show you a different part of the region.

There are many craters here with dune fields in them. Let’s have a look at a typical example, Sera crater: 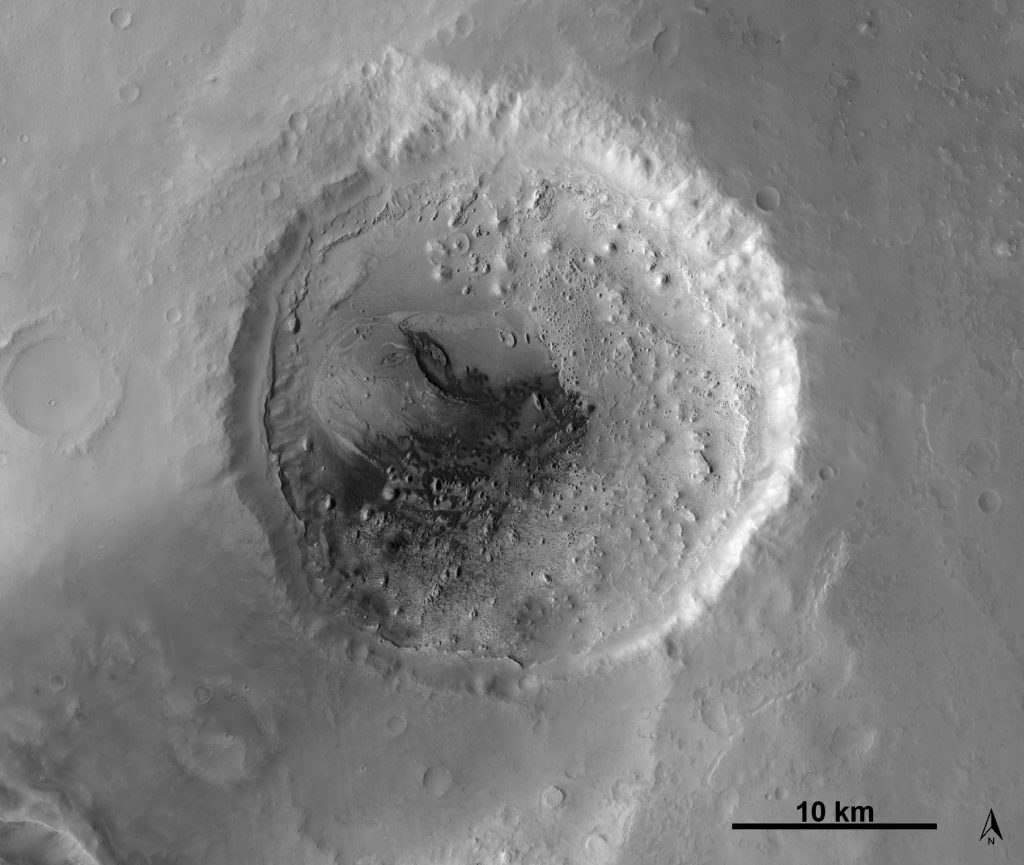 Sera crater is 28 km (17.4 mi) across. Just from the view above, I can tell it has a fascinating history. The crater was partially filled with layers of sediment, and perhaps volcanic ash as well. Much of the material in those layers have since been eroded away, exposing the layers and leaving behind knobs of terrain that still stand because they’re more resistant to erosion than the rest of the layered material. Between those knobs are some fat little dark dunes, attesting to the ongoing wind erosion. The dark sand may be derived from the layers that are eroding, or perhaps the dark sand blew in from the surrounding plains. Those dunes are just the most recent indicators of a long history of erosion.

Let’s have a closer look. The HiRISE camera on the Mars Reconnaissance Orbiter has taken many wonderful images of this crater. Some of those images have overlapped enough that stereo images have allowed the camera team to build a topographic map of part of the floor. First, though, here’s a view of one of the HiRISE images from the central part of the crater floor: 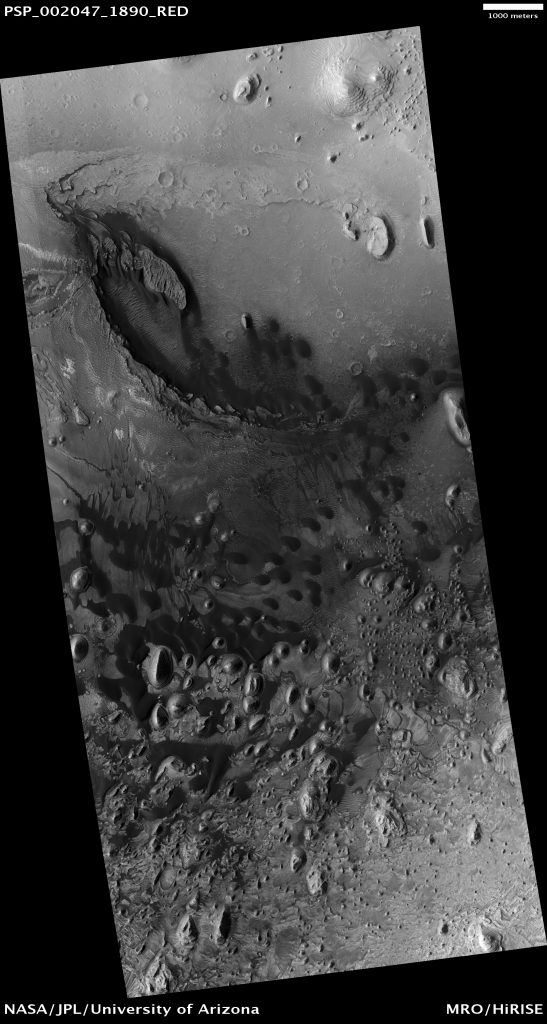 This is a really neat place, from an aeolian (wind-blown) perspective. Let’s take a tour.

First, I’m going to give a shout-out to the amazing layers in this crater. Mars is full of layered rocks like these, which tell us something about ancient movement of sediment, or maybe volcanic events. The layers are remarkably even in thickness, suggesting they were deposited by events occurring with a regular periodicity. Regular volcanic eruptions? Regular patterns in climate shifts that led to dramatic depositional events from dust storms or polar caps? We still don’t know. 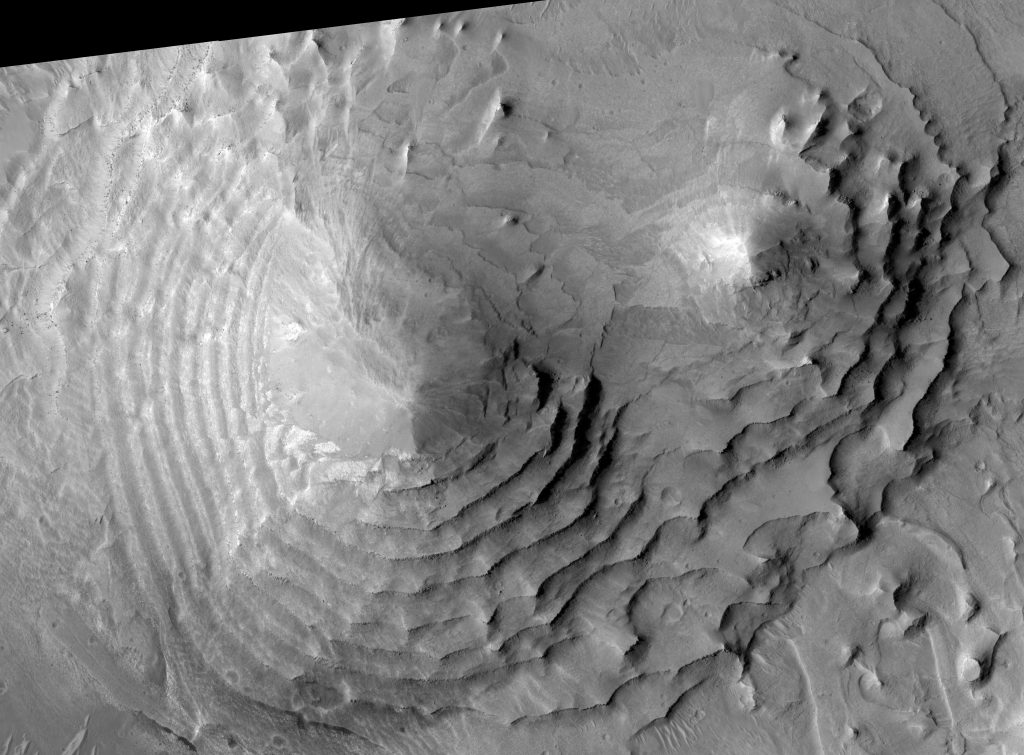 BTW, have you clicked on the images? Each one has a link to a higher resolution version. There’s nothing like more detail to improve a landscape image.

When the wind blows sand, it can slowly erode a surface. Some areas erode faster than others, maybe because parts of the bedrock are more competent than others. Over time, sand-laden wind will make furrows in the ground that accelerate the wind between the resistant knobs (like islands in a stream letting water flow around them). Those regions of accelerated flow lead to stronger erosion (downcutting), leaving behind resistant areas that are beautifully streamlined. Those are called yardangs. Mars is full of them. I’ve mentioned them before. Wherever you see them, windblown sand once, and maybe still does, travel through. 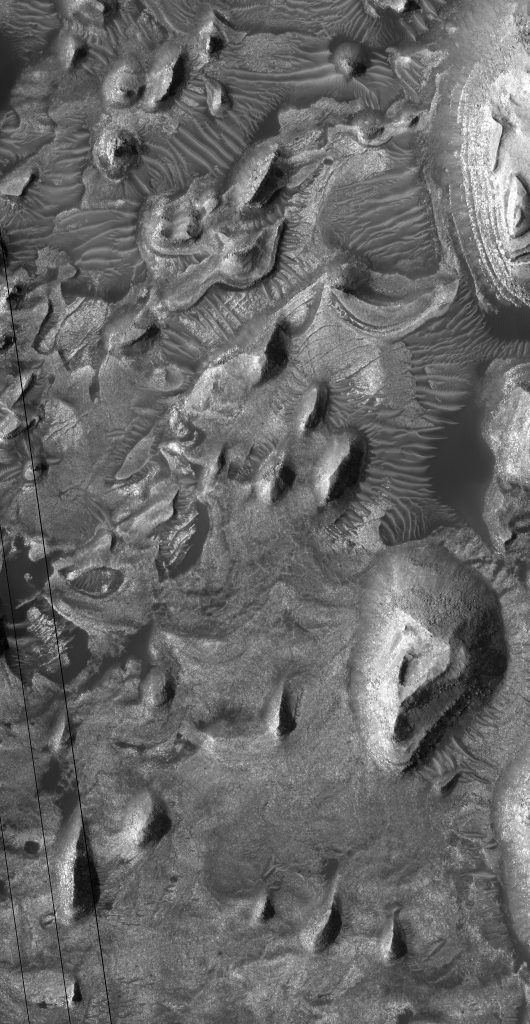 The yardangs in Sera crater aren’t as pretty as some. But they’re there, and they’re an important part of the story. See how the hills in the image above are aligned, tilting from the upper right to lower left? They’ve been carved by sand blowing along the same direction. If you pan around the whole browse image, you’ll see more streamlined hills aligned along the same axis. This is what makes me think that wind erosion is one of the dominant forces carving up this layered material.

Between the streamlined buttes and mesas are deposits of windblown sand. Here are some giant ripple-like types that are common on Mars:

These giant ripples are a little weird, as we don’t have things like this on Earth. The biggest ones in the image above are 20 m (66 ft) apart, and probably ~2 m (6.6 ft) high. They’re not dunes (I’ll show some dunes later on). Since we don’t know what else to call them, we refer to them as Transverse Aeolian Ridges (or TARs).

What’s neat about these things in Sera crater is that there are signs of much older versions of them that became stabilized and perhaps lithified, and then eroded. Take the bright, wavy structures here:

Those wavy structures are old lithified TARs. At the middle right, a dark dune has buried some of them.

How do I know they’re old and lithified? For one thing, ripples and dunes are made of loose sediment when they form. Any structure that survives the ages must find a way to be resistant to erosion. Here’s an annotated version of the last image, showing what I think we’re seeing here:

First, long ago, the “older surface” formed. Then a second layer, the “old surface”, formed, with TARs on top of it. Then all those layers (and the TARs) became lithified through some process. Maybe they were compressed through burial by other layers. Maybe once the layers were buried, water flowed through and left behind deposits that cemented the layer’s sediments together.

At some point, the overlying layers were eroded away. They’re gone now – we only know they were once there because we see buttes spread through the area, monuments to huge amounts of material, long since removed (gone, but not forgotten).

Sometime, maybe before it was exposed, the “old surface” was subjected to stress that broke the rock, leaving fractures that may be faults. Some of those fractures broke through TARS, which is yet more evidence that the TARs were lithified – you can’t break a pile of loose sand and leave behind a visible crack.

And then finally, dunes crossed the whole surface, probably doing a little bit more surface erosion as the sand that makes up the dunes bounces along the ground and slowly rubs away at the surface.

Oh yeah, my favorite part. Modern dunes are now crawling across the surface. I don’t know if these in particular have been monitored, but I’d be surprised if they aren’t actively migrating. These dunes are slowly crawling toward the southwest (toward the lower left). This is approximately the same direction that the yardangs and TARs are aligned to, suggesting that the wind pattern hasn’t changed too much over the eons. Be sure to click on the image to see the thing at full resolution. Mars is really very pretty. 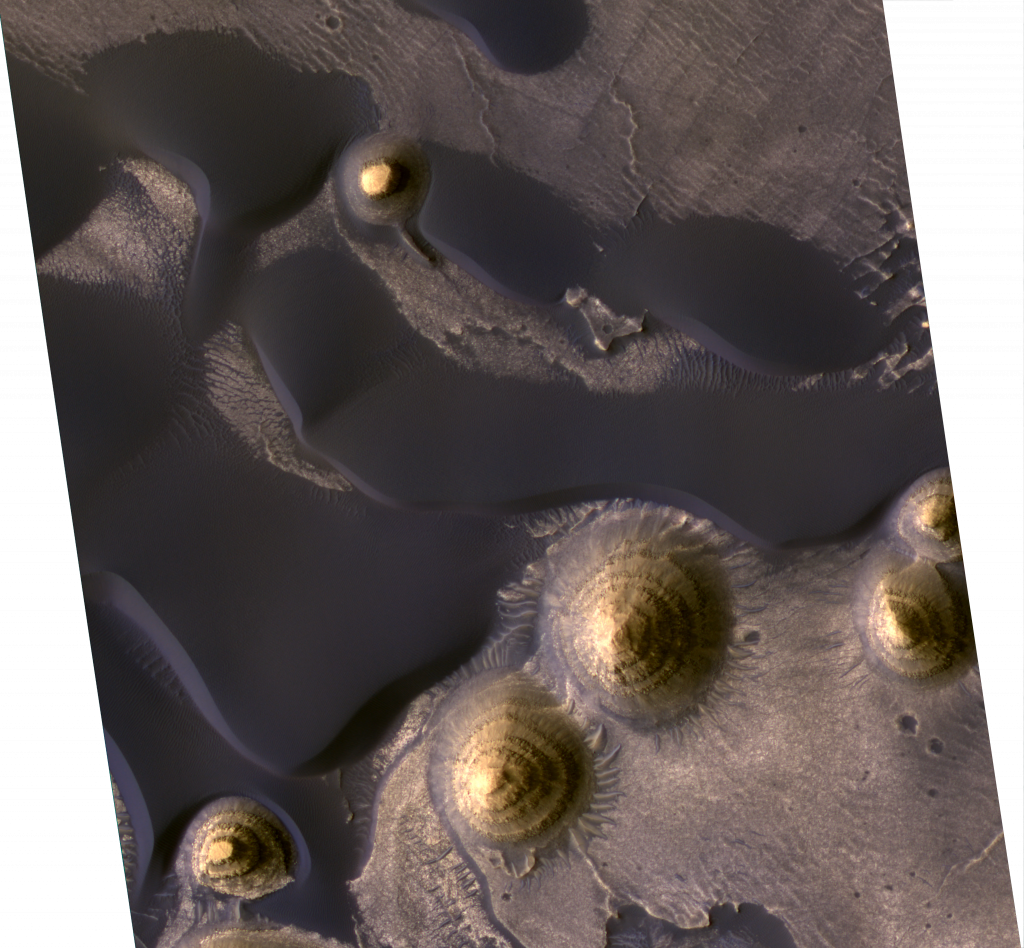 See the HiRISE image in 3D (and in color!), as shown by the amazing Seán Doran: