There are sand dunes near both the north and south poles of Mars. The ones I’m showing today are on the floor of Jeans crater, which is down at 69.5°S (for reference, on Earth, some bits of Antarctica reach to this latitude). Jeans crater is 74 km (46 mi) across, and like many of the larger craters in the southern highlands of Mars, it’s got a dune field in it.

This far south, the dune field spends a lot of its time covered in seasonal CO2 frost. It’s just past Mars’ antarctic circle, which means it spends part of its winter in total darkness, and part of it summer in perpetual sunlight. 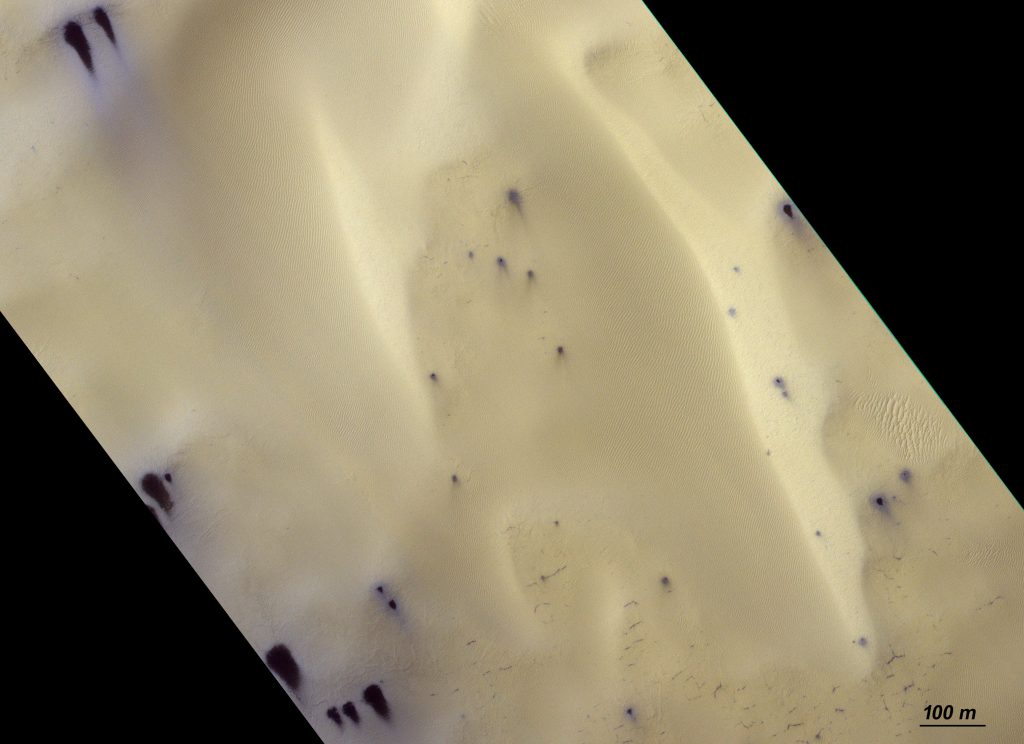 If you’re not used to looking at dunes, or Mars dunes, or in particular, frosted Mars dunes, this image might be a little tough to grok. Let’s see if I can help.

The tan parts are the frost-covered surface of Mars, some of which is covered by sand dunes. The dark splats are holes in the seasonal frost that are letting the actual dark surface show through. CO2 can’t melt (just as on Earth, it goes straight from a solid to a gas), so it doesn’t disappear from the ground the same way snow on Earth does. Sunlight makes its way through some of the more transparent parts of the ice, heating the ground just beneath those spots. Over time, those spots will grow in size and become more numerous, and the martian dunes will look a little bit like cheetahs. But for now it’s still mostly frost-covered.

The light and dark tan areas are hills (made of sand) lit by the sun. Here’s where the dunes are: 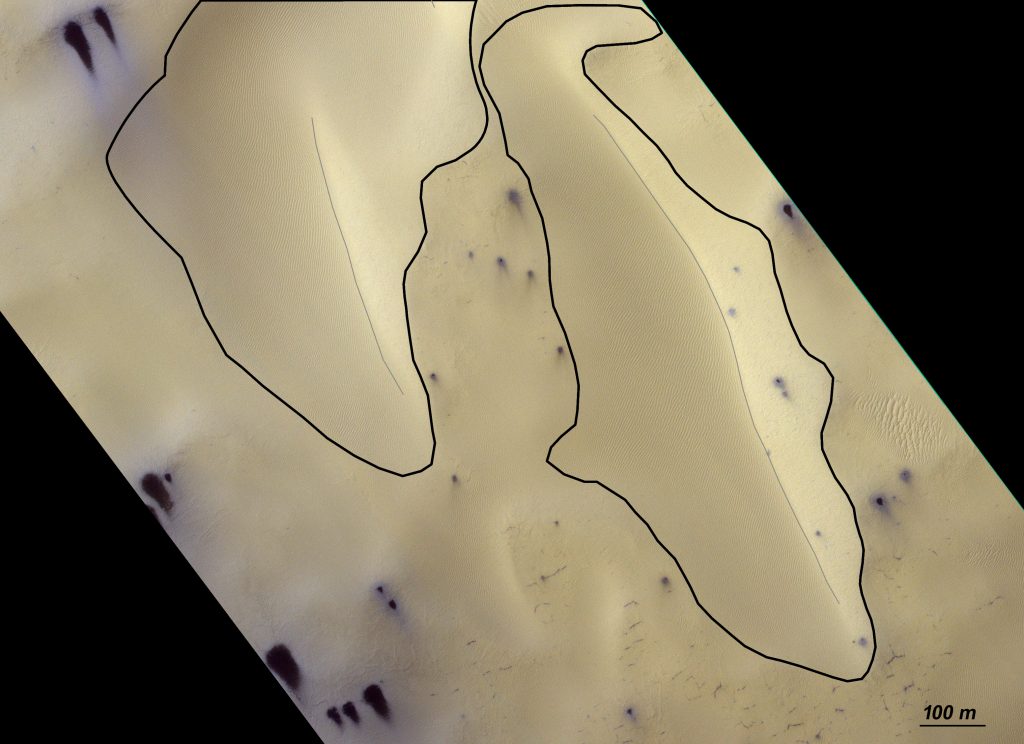 I’ve added outlines in black showing where the larger dunes are in this image. The straighter gray lines show the crestlines – these are the peaks of the dunes. My outlines look a bit like fish. Or maybe flatworms. So these dunes are a little funny shaped.

If you look closely you’ll see that the shady (darker) side of the dunes is a little wider than the sunny (bright) side. The windward side of the dune is usually broader, so the shady side is the windward side. It’s also the side that’s covered in wind ripples (which are in turn covered in frost). Note that only the sunlit side has dark defrosting spots on it – the shaded side will be the last to lose its winter frost.

The frost-covered ripples are most likely locked in place once the frost forms on them, so they were probably last active in the short frost-free period of the previous summer. I published a paper 10 years ago describing how the south polar dunes appeared to be inactive, but the fresh appearance of these ripples in this image suggests they’re not totally dormant. Maybe I was wrong.

That said, I think the dunes in this dune field probably record a long history of activity and inactivity that may come and go with subtle climate shifts. If the winter is slightly more severe, then more frost will condense out on the dunes and stop them from migrating, maybe even during the narrow window of summertime (and if the winter is more severe then the increase in CO2 frost, which is what the atmosphere is made of, will also lower the air density, which will make it even harder for the wind to move these dunes!). My premise in that paper still holds, I think, which is that the dunes are sensitive to climate changes, and have the potential to tell us about Mars’ recent climatic history.