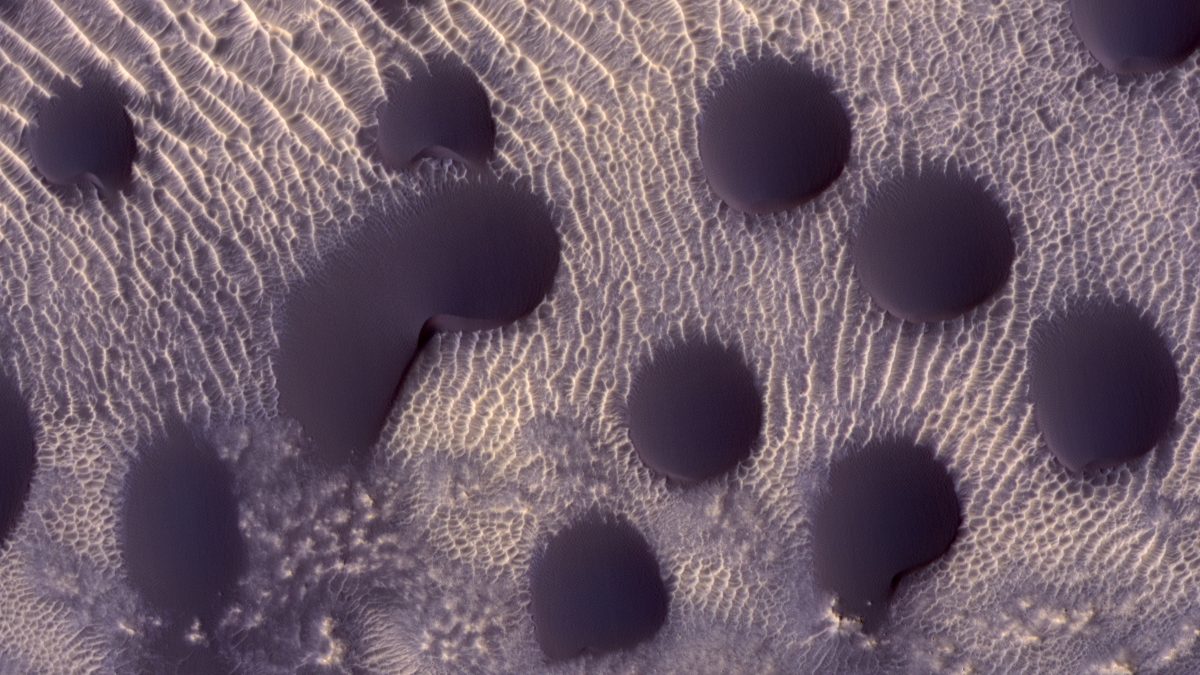 I’ve been busy but I wanted to squeeze in a quick pretty picture of some Mars dunes. These: 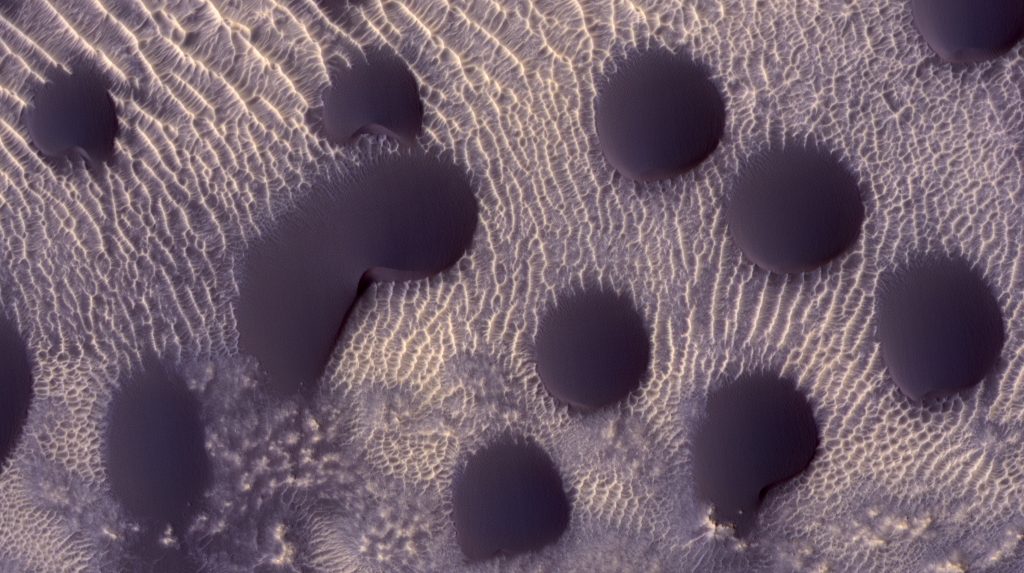 These dark hills of windblown sand are on the small side for Mars. The smallest is ~88 m (288 ft) across (for reference the smaller dunes found on Earth are usually 1/4 this size). What’s cool about them is the variation in their slip faces: that steep slope that is just crying out for someone to slide down it (or roll down it, or run down it, or go sandboarding🏄🏽‍♀️, or something fun). Some have nice steep slip faces that are easy to find, clearly proclaiming that the wind is blowing mainly toward the bottom of the frame. That must be the case because we’re looking at an itty bit of a dune field, most of which is off the edge of the frame to the bottom.

But then there’s that big one that looks like a bird has an outstretched wing – it’s got a weirdly shaped slip face. For some of dunes (like the one at the bottom right in the middle), the slip faces are harder to find. The slip faces on the dunes in the upper right seem to wrap around the dunes, suggesting that a wind blowing from the upper right to lower left might also sometimes be able to create a slip face. And the one on the lower left has no slip face at all.

Why are they all so different?

That question has a complicated answer, one that’s pretty difficult to unravel without the benefit of watching the dunes evolve over decades. Sadly, we don’t have that (but fund your friendly neighborhood space agency and one day we might have that information).

Here’s what I can say without making your eyes cross from information overload:

Slip faces don’t form in dunes where the wind blows from too many different directions: as the wind shifts to a new direction, it erases the older slip face.

The wrap-around slip faces in many of the dunes suggest that winds blow from a wide range of directions, so some of these dunes are verging on losing their slip faces. When no slip face is visible but it’s still clearly a pile of windblown sand standing there all by itself, it’s called a dome dune.

OK yeah, but why are they different from each other? Little differences in the nearby topography are probably affecting the wind flows, so that some dunes are more sheltered from the wildly swinging wind patterns than other dunes. And some of these dunes have probably crashed into others (I’m looking at the big bird-wing one especially), which does all sorts of weird things to dunes: it changes their shape, and therefore the airflow over it (which in turn affects its shape, which changes the airflow, which… I know, nothing’s easy, is it?). One dune crashing into another also adds more sand to the dune being crashed into – but only in the spot where the crash happened, and that affects how it moves. It gets weirdly, but beautifully, complex.

So they’re all different because this is a topographically complicated area and because dunes, like people, have history with each other.

Why should you care?

Who doesn’t want do go sandboarding on Mars? Wouldn’t you want to know how to pick out the best dunes for that? (you might want to study weather and climate patterns on Mars that’s also pretty neat)