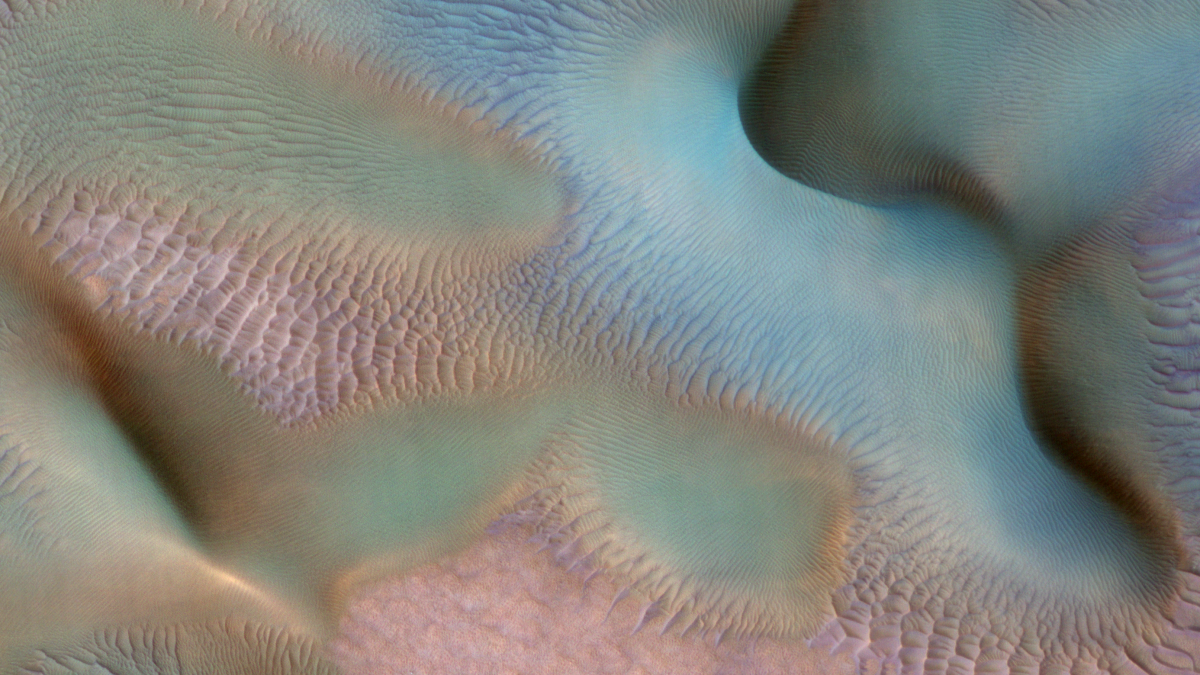 It’s Veterans Day in the US today. For some it’s another day of work. For others it’s a day to spend with the family. For most, we honor those who have served in our armed forces. I’m at work today, along with what I call the “holiday skeleton crew” – those of us at the SETI Institute who come to work on some holidays because our schedules allow it and because this is where we want to be.

It’s been a while since I posted a HiRISE picture. I’ve been really busy with work, and I’ve also been fighting off a seemingly endless cold. So to take a break from being sick (oh how I wish I actually could), here’s a new HiRISE image that I find quite intriguing.

Let’s jump into it. Here are some dunes that seem to be made of two distinct colors: 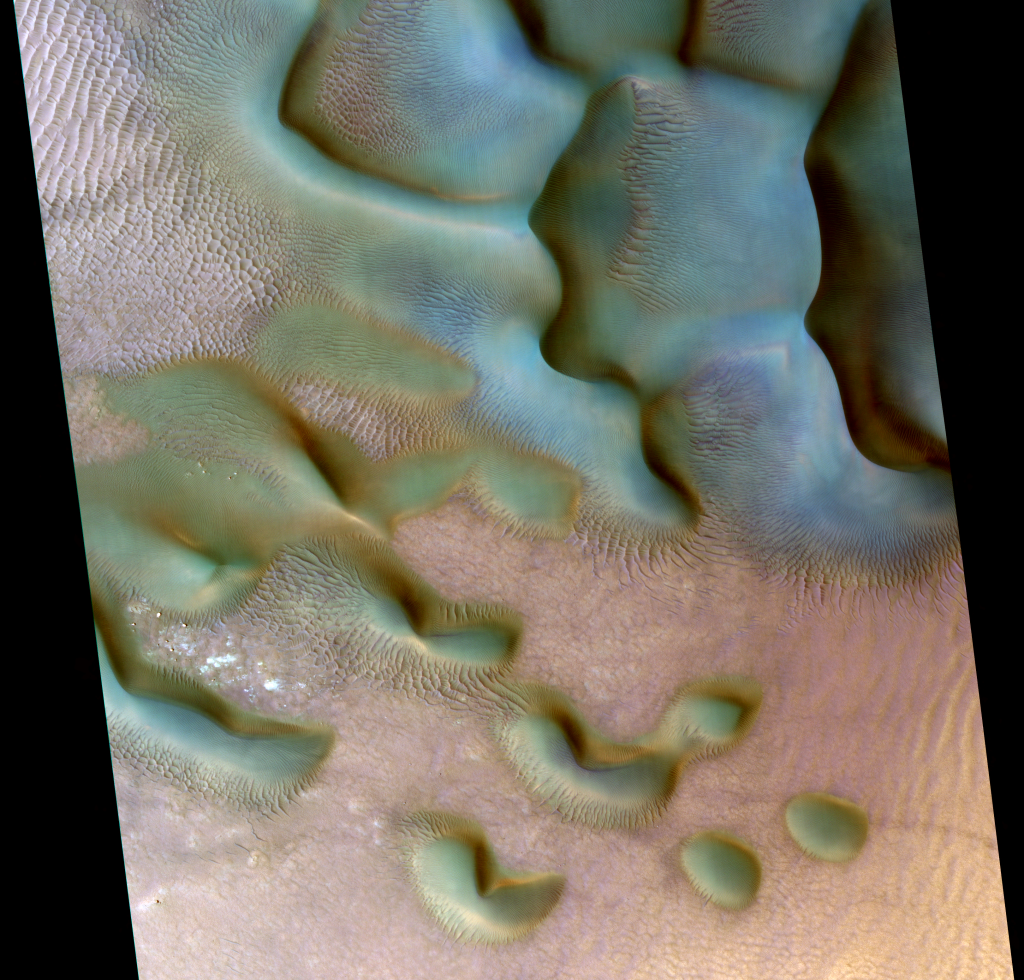 OK, wild, right? Green and blue dunes sitting on a cream to orange surface. Is that really what they look like? Probably not. I had a hard time stretching the image to look realistic. If I tried to tone down the blue (which is my typical goal with HiRISE IRB images), it made the green dunes greener. If I tried to tone down the green dunes, it made the ground redder. It’s an unusual spot, but my suspicion is these dunes aren’t really such vivid blues and greens, nor is the surface that orange. I’m betting something in the camera gain states for the color filters did something with this image that’s different from most HiRISE images, and it’s defeating my limited color skills today.

But. But but but…

The difference between the green and blue dunes is real. Maybe the difference isn’t so strong as it appears here, but there really is a shift. The dunes at the upper right are bluer (or less yellow), and the smaller dunes at the lower left are greener (or more yellow). That’s unusual for Mars, where dunes in a single dune field are often very close to the same color.

So what’s going on?

My first inclination when I see color differences in a dune field is to think about dune activity. Dune sand on Mars is made of dark stuff, like basalt. But Mars is a dusty place, with bright dust continually falling out on the surface most of the time and in most places. Sometimes there’s a divide between light and dark where bright dust-covered dunes are simply less mobile than nearby dark dunes that have been able to shake off the dust as the wind bounces sand grains around.

This seems a little different. First of all, it’s a color difference I’ve not seen before. Second, the color difference is linked to entire dunes, some of which seem to be overlapping dunes of contrasting color. Let’s zoom into where this happens: 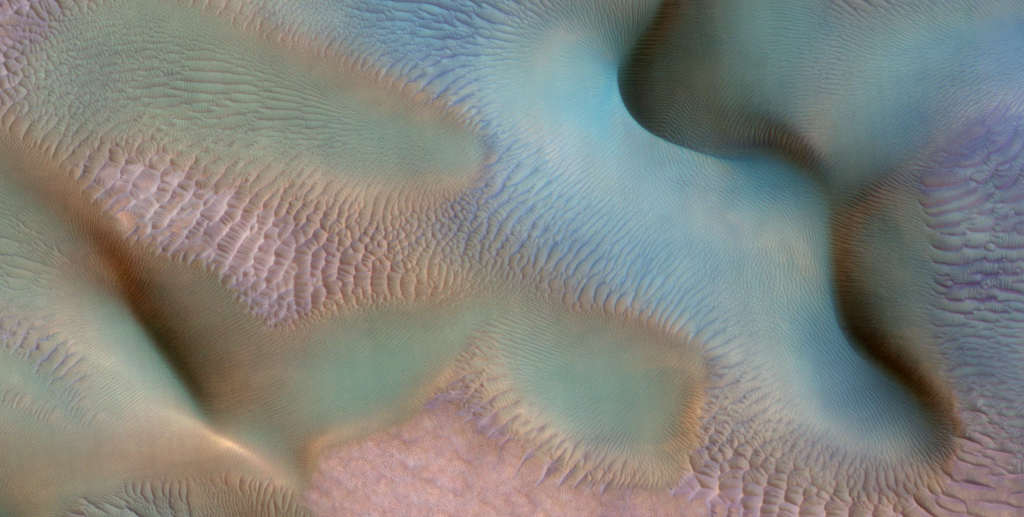 The shorter, greener dunes seem to be encroaching on the taller, bluer ones. That makes sense, because smaller dunes migrate faster than larger ones. I’m guessing that the smaller, greener dunes are a little bit younger than the larger, bluer ones, because it takes time for larger dunes to build mass. The greener dunes are found at the outskirts of the larger bluer dunes, which extend a little ways off to the upper right offscreen (you can see the whole dune field here). All of the dunes seem to have formed at the confluence of winds blowing from the west, southwest, and northeast, regardless of their color.

The hypothesis I’d put forth (if I were to write a paper on these dunes) would be that the bluer dunes piled up first, although it’s a little unclear where the sand came from. Then a while later, a new pulse of sand came from the southwest or west, forming new, smaller, greener dunes. Like the bluer sand, the greener sand got stuck in this one spot because the winds that mobilize the sand converge here. These two populations of sand grains may have a different source region. It’s not clear what direction the blue sand came from – in fact, the greener and bluer sand might have the same source location, but are derived from different layers of material (for example, the source of the older bluer sand may have eroded away, exposing new material rich with greener sand).

This would be a great location check out data from an imaging spectrometer (like CRISM), to see if any mineralogical differences could be found here. I’m curious to know what causes the color difference!