The baby is having a nap so I can post a little about my research – I had been meaning to do this for a while actually!! Few weeks ago I finalized my first paper (ie. scientific publication) for this year. It is part of my on-going field of research since my PhD. Let me try and explain the idea behind the project and hopefully it will be clear to the non-astronomers…

My field of research is in general on the formation of our Galaxy- the Milky Way (MW). In particular the formation of the MW disk. As is the case in most spiral galaxies, the disk is where most of the baryonic matter is found, ie, stars and gas. Therefore understanding the origin of the disk is pretty fundamental to understanding the formation of the galaxy. The stars in the disk “field” as we see today is a mixture of the original “building blocks”. Now if we can identify which stars came from where, and reconstruct the original building blocks, then we can get a better understanding of how the disk formed and evolved. So basically the long term goal of the project is to untangle the stellar disk! 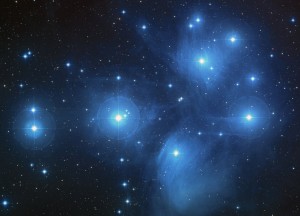 Now the question is how can we pick a star and say when and where it was born? Actually determining the ages of single field stars is quite difficult. But determining the age of a star cluster to a good accuracy is easier. At present there are star clusters in the disk, known as Open clusters (OCs), a popular one is the Pleaides. In a cluster, all stars are born pretty much at the same time and from the same material. So all stars in a cluster are identical in age and chemical make-up. This was what I studied for my PhD Thesis titled “Chemical Homogeneity in Galactic star clusters”.

OCs don’t stay together for long. They “dissolve” – loose their member stars into the field. It is possible that the OCs we see today in the disk are the left-overs of the originally large building blocks of the disk. That means that some of the clusters’ earlier stellar members are now hanging around somewhere else in the galaxy. We can search for these lost member stars by looking for stars with identical chemical make-up as the clusters. In theory, the field stars showing the identical chemical pattern as a particular cluster is likely to have originated from that cluster. This idea of using the chemical elements as a “tag” is now being referred to as “Chemical tagging”. Actually the “chemical tagging” catchphrase is one that my PhD supervisors came up with. So if we can do this sort of tagging to most stars in the disk, then we can re-create the original larger clusters, determine ages and a step by step picture of how the MW disk came to look like what we see today.

So that is the idea behind my main research. I hope all this makes sense. There is of course much details missing in this post – but I think this gives a general introduction without going into the technical aspects. I will post more on this topic for sure and get into the details of what exactly we are doing, which clusters we are studying, the actual chemical elements we are exploring and how much of the MW disk we are slowly starting to untangle. Ok that baby is already waking up!!

2012 – the year of Astronomy meetings