Ohh dear! Its only a few months short of being one whole year since I last posted…where did the time go? What was I doing all this time you ask? I think its fair to say I have been running between Heaven and Hell with HERMES. 🙂

The 2dF robot placing fibers on the plate to observe. This system will feed light into HERMES. Photo: Barnaby Norris

I introduced my role as HERMES project scientist in the earlier post, but didn’t get around to explain what it is and why we are doing it. HERMES stands for High Efficiency and Resolution Multi-Element Spectrograph. It is the next major new instrument for the 4m Anglo-Australian Telescope (AAT), located at Siding Spring Observatory in the middle of New South Wales. HERMES will make use of existing fiber positioning facilities at the AAT (shown in the picture on the right) to provide high-resolution spectra of ~400 stars simultaneously covering four different spectral wavelength ranges in one go. It will certainly be a unique instrument!

The design of HERMES was selected such that we can use it to undertake a large scale survey of stars in our Milky Way galaxy, that is currently not possible. With so many stars observable in one go, we are proposing a large observing program to target over a million stars! The goal of this ambitious project is to chemically tag each of these million stars and identifying the original “building blocks” of the Galactic disk. This field of research is usually referred to as Galactic Archaeology. I posted earlier about the idea behind the chemical tagging technique and my work on dispersing star clusters. Now the plans are in place to carry out large scale reconstruction. 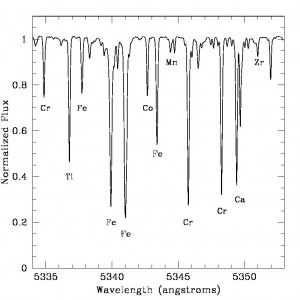 For this Galactic Archaeology survey, HERMES will provide spectra in four different wavelength regions. Different chemical element are measurable from different parts of the stellar spectrum. The image on the left is a small region of the Sun’s absorption spectrum. The different absorption lines are due to different chemical elements present in the star’s atmosphere. By measuring the depth of the lines we can estimate the abundance (i.e how much) of that element is in that star. We are working here in the optical part of the spectrum, and HERMES is designed to get spectra in regions where the chemical elements needed to carry out ‘chemical tagging’ will appear. The aim is to measure more than 25 chemical elements! These lines need to be sufficiently resolved (i.e. not blended with other lines) in order to make an accurate measurement. HERMES will provide a nominal resolution of 30,000 which is exactly what we need (it will also have a higher resolution option of 50,000 for other projects).

Also, we need to have sufficient signal to make accurate measurements of the chemical content of the stars. The typical ratio of signal required over the noise that we need is 100. HERMES is deemed high-efficiency, because we aim to get this 100 signal-to-noise in 1 hour of observing (for the experts: on a 4m telescope for V~14mag star, using a fiber-system – that is pretty good efficiency). 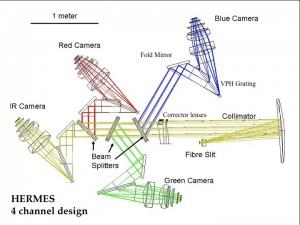 The four channel design showing the light path from Slit and ending at the Cameras. 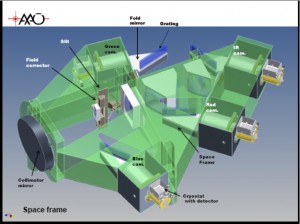 A model of what we expect HERMES to look like once all the components are assembled.

When I arrived at the AAO last year, my immediate task was to sort out the science requirements for HERMES as the project was at the Preliminary design stages. Since this was my first time getting involved with instrumentation, it was both interesting and challenging at the same time. Deriving a set of requirements is easy, but then you need to deal with the practicalities of it regarding the engineering, time, costs, etc. There are many things that an astronomer (esp. a naive one like me) doesn’t think about, which the engineers are quick to point out. It is interesting working in a cross-disciplinary team where some cannot understand why I am so adamant about a certain specification, while I don’t exactly feel strongly about a different requirement which the engineers see as a major problem. So much of my time last year was discussing things with the wonderful engineering team here at the AAO, learning about the complexity of building a new instrument (from optics, mechanics, electronics to software and data handling and everything in between) and the team’s give-and-take needed to make it all happen.

Last December the HERMES team put a massive effort and we passed our Final design review! So now things are relatively smooth rolling with many of the instrument parts being put together. The next major step is when we are ready to assemble it part by part and then put it up on the telescope! HERMES first light is expect in early 2013 and that will be the moment of truth!  🙂

2012 – the year of Astronomy meetings