The Nobel Prize in Physics 2011 goes to Supernovae!

Great news! The Nobel Prize in Physics 2011 goes to Saul Perlmutter, Brian Schmidt and Adam Riess,“for the discovery of the accelerating expansion of the Universe through observations of distant supernovae”. This was somehow in the air since 2007, when they were assigned the Gruber Cosmology Prize. But now is real. No matter what the physical explanation for the observed effect is, the finding is striking, and probably constitutes one of the most important scientific results of the past century. Truly enough there is probably another branch of astrophysics that has achieved great results in the last 20 years, and that is the one of extra-solar planets, led by the Swiss astronomer Michel Mayor. However, although it had a great impact on the public (and understandably so), its importance is somehow more philosophical than physical. On the contrary, the study of distant Supernovae and their deviating behavior have triggered a great discussion, and its implications may be very profound.

But it is no much about the discovery in itself that I like to blog about. You can find a lot on the web about this. No, I’d like to write a bit about the personal/human aspect of this. 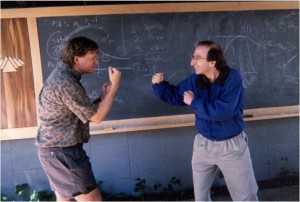 I met Saul, Adam and Brian in 1995, at Aiguablava, near Barcelona, at the NATO Advanced Study Institute on thermonuclear explosions. At that time I was a PhD student, and that was my first international conference on Supernovae. I remember that Adam was a young student of Robert Kirshner, while Brian was just out of his PhD, which he also did under the supervision of Bob. Saul was a bit more senior;  I remember I had one nice dinner with him. At that time their projects were just starting. As you may remember, they followed two different paths. The two competing teams (the high-z SN Search and the Supernova Cosmology Project) were led by Saul and Brian. There is a nice picture (taken by Nick Suntzeff) that portraits Brian and Saul while they are boxing. It effectively renders the friendly competition between the two teams. They found similar results, and they both could not believe in what they had found. For some time they were convinced something was wrong with their data. I was not involved in either of the projects. However, when I was working in the team of the 3.6m in La Silla (Chile), I assisted to a couple of observing sessions. That was quite a challenge. They were visionary, in the sense that they were indeed seeing things beyond the horizon of what was, at that time, barely technically feasible. And their stubbornness is today rightly awarded a Nobel prize. 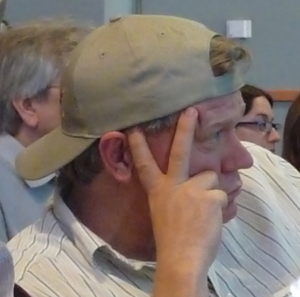 Among the three of them, Brian is the one I know best. Last week he was in my office here in Garching, together with his former PhD student Wolfgang Kerzendorf, to discuss the details of a future project. I still can’t believe that. Gee, I should have taken a photo… You know, when I was young, a Nobel prize meant to me some old researcher. Yes, somebody like Einstein, Bohr, and the like. But the man is one year younger than me, and I sat many times in conferences chatting with him. I am not sure what of him I admire more: his scientific skills or his personality. One of those amazing guys that make you feel comfortable, although he is several steps above you… Every time I think about him I cannot help myself comparing with some senior (especially Italian) professors, who treat you with a superiority that has no counterpart in their scientific thickness…

The more I think about it and the more astounding I find the whole thing. Sure, I had met in person another Nobel Prize, Riccardo Giacconi, when he was the director of ESO. But he incarnated more the ideal of a Nobel Prize winner, at least in my imagination, especially because he belongs to another generation. But Brian, Adam are *my* generation. And soon they will be stepping on the stage where Einstein, and other great personalities have walked. And they will go down to history. On the other hand, this also reminds me that this happens only to a few scientists. All the others will be soon forgotten.  All their struggles, and obsessions to add some word to the pages of the great book of science will vanish. A sad thought, you may think. Indeed… 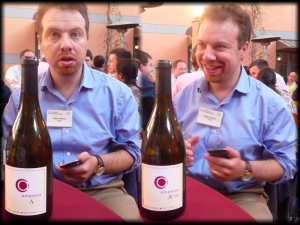 To regain some spirit, I’ll now close posting two photos of Adam I took in S. Barbara. On the left you see him with a bottle of wine, called “Lambda”. On the right, I had replaced Lambda with “w” (which Adam prefers). The difference is subtle, but the physics behind that are different.

Stephane Udry gives a talk at ESO on exo-planets